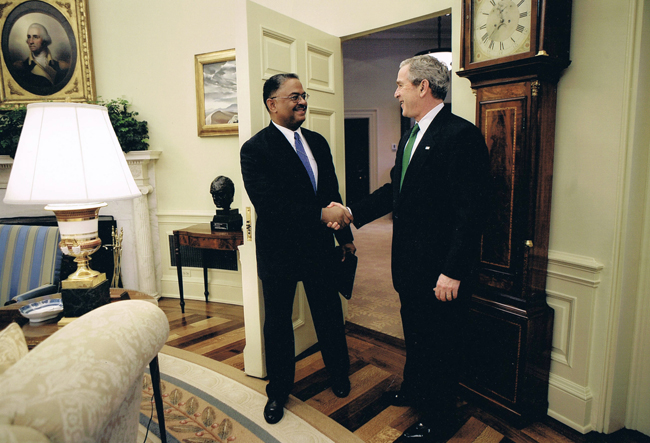 Steve Rochon is pictured in an undated photo with President George W. Bush at the White House. Rochon, a parishioner of St. Joseph Church in Alexandria, Va., and who worked as director of the executive residence and chief usher at the White House from 2007 to 2011, served as a consultant to the film "Lee Daniels' The Butler," ensuring that scenes and costumes were accurate. (CNS photo/courtesy of Rochon)

ALEXANDRIA, Va., (CNS) — For four years, Steve Rochon worked alongside presidents, dignitaries and international heads of state in his position as director of the executive residence and chief usher at the White House.

Rochon, a parishioner of St. Joseph Church in Alexandria, Va., led 95 full-time and 250 part-time staff members in running and preserving the White House under Presidents George W. Bush and Barack Obama from 2007 to 2011.

In his role, he had to prepare for visits from past presidents, celebrities such as Stevie Wonder and Maya Angelou and heads of state that included England’s Queen Elizabeth II. He was invited on a private tour of Buckingham Palace and stood in the presence of Pope Benedict XVI, who later gave him a blessed rosary and a specially minted papal coin.

For Rochon, a history buff who served as a Coast Guard commander for 36 years, the job was a dream come true.

“It didn’t get old coming through those wrought iron gates every day,” he said. “I pinched myself every day as I drove through those gates, ‘Look where I’m working.'”

Among the many memorable moments in the job was a brief meeting Rochon had with longtime butler Eugene Allen, who served at the White House for 34 years and under eight presidents. Allen retired as head butler in 1986, but he came to the White House for an oral history interview while Rochon was on staff. Rochon was impressed by Allen’s humility and, when he passed away in 2010, arranged to read a letter from Obama at the funeral. 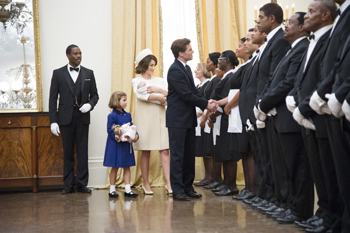 This is a scene from the movie “Lee Daniels’ The Butler.” (CNS photo/Weinstein)

Because of his White House experience, Rochon was chosen as a consultant for the film. He read the screenplay ahead of time and was on the New Orleans film set for most of the 40-day shoot. Whenever a scene was set in the “White House,” Rochon was in charge of keeping details as close to real life as possible: ensuring characters entered rooms in the correct way, that costumes were accurate down to the right military medals and that music was played at the correct times.

Rochon also helped Whitaker prepare for his role as Cecil Gaines, the film version of Allen.

The experience was exciting for Rochon, who enjoyed learning everything that goes into filming a Hollywood movie.

“Watching what goes on behind the scenes of making a movie is incredible,” he said. “It’s really fun watching what the audience doesn’t see and seeing how hard the staff worked.”

One of the first changes Rochon suggested had to do with the film’s original content. When he first read the script, he noticed the dialogue was littered with strong language and was “clearly R-rated.”

“I told them, ‘This is a great story, a great script, but I cannot have my name associated with something with this type of language,” he said. “After 13 years (of Catholic schooling) with the Blessed Sacrament nuns and the Josephite fathers, and with a cousin who is a retired bishop in D.C., I can’t put my name to something that is R-rated. I don’t know if that changed anything, but all I do know is it became PG-13.”

“We talk daily,” Rochon said. “He is so moved by this that he needs to share that with someone. It’s surreal for him that his little dad, his quiet unpretentious father that kept the White House secrets very well, is now a hero and he’s getting to live that through him.”

Rochon has seen the movie three times. He attended both a private screening hosted by President George H.W. Bush in Maine and the official film premiere in New York City. Once the movie was in theaters, he organized a screening for 39 of his family members and friends in Alexandria.

What impressed him most was how the filmmakers merged Allen’s story with the civil rights movement happening at the same time. While growing up in the South, Rochon remembers seeing segregated water fountains and being called “the horrible N-word” while walking to a Boy Scout meeting at his church.

“I lived during the civil rights movement in the South and this struck a chord with me because that racism was real for me,” Rochon said. “This does a lot for people of my generation, but also for the young folks to be able to see what it was like back then, to appreciate how far we have come, and to not take those things for granted or go out in the streets to take someone else’s freedom.

“I was very pleased with the whole product and how it was put together,” he said. “Watching this, it really was a schoolhouse, not just a movie house, because it brought back those things for people who normally would not want to be bothered with reading it in a history book.”

The movie also marked his own big-screen debut. Rochon is not in the movie, but a young actor, Stephen Rider, depicts him in one of the final scenes. Rochon met and had lunch with Rider during the film shoot. Watching that scene was surreal, but “awkward,” he said.

“If there was any critique I’ve gotten from (friends and family), it was that, ‘You should have played yourself. Or you could have at least gotten Denzel Washington,'” Rochon said with a smile. “But my wife said, ‘He’s not good enough.'”

Bahr is a staff writer at the Arlington Catholic Herald, newspaper of the Diocese of Arlington, Va.

PREVIOUS: At interfaith service, calls made to continue search for justice