At interfaith service, calls made to continue search for justice 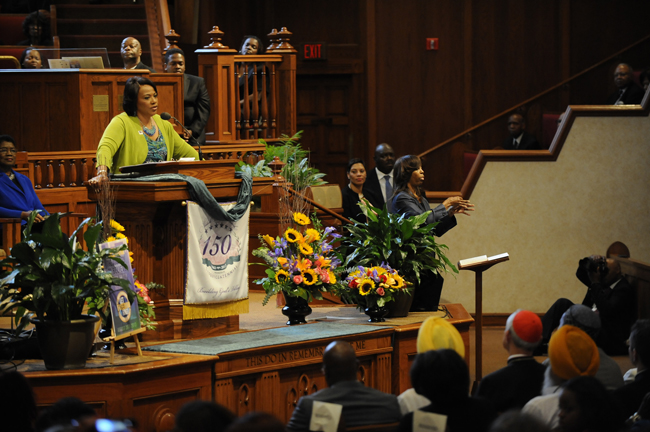 WASHINGTON (CNS) — Recalling the words of the Rev. Martin Luther King Jr., Cardinal Donald W. Wuerl of Washington urged people to join hands and walk together, and not alone, for justice during an interfaith prayer service marking the 50th anniversary of the civil rights leader’s “I Have a Dream” speech.

“We have been invited to form one great human family that walks hand in hand,” Cardinal Wuerl told those gathered at Washington’s Shiloh Baptist Church Aug. 28.

Cardinal Wuerl and representatives of other faiths joined Bernice King, the slain civil rights leader’s youngest child and CEO of the King Center in Atlanta, for a reflection on Dr. King’s legacy.

Noting that schools in the Archdiocese of Washington were integrated “before the Supreme Court got around to it,” Cardinal Wuerl said that an academically excellent and morally based education will help future generations realize Dr. King’s dream.

“The church in Washington strives to see every child gets a chance for an excellent education,” Cardinal Wuerl said.

The cardinal also called on the participants to join together “in solidarity, faithful to God’s call” and reminded them that Pope Francis “told us that faith must guide our lives.”

Convened before the 50th anniversary of the March on Washington at the Lincoln Memorial, the prayer service included Scripture readings, musical performances, reflections and excerpts from Rev. King’s speeches.

Bernice King told the congregation that while her father is rightly remembered as a “freedom fighter” and civil rights leader, he was first of all “a man of faith.”

“It was the spirit of God that infused that (nonviolent civil rights) movement,” she said.

The Rev. Otis Moss Jr., a retired Baptist minister and civil rights leader, reiterated Rev. King’s nonviolent message. “Nonviolence may not keep you safe, but it is saving,” he said.

He called on the congregation to share Rev. King’s message with the next generation because “our children and our children’s children must go on. … Each generation must climb higher and higher.”

Rabbi Julie Schonfeld, vice president of the Rabbinical Assembly in New York, said the March in Washington 50 years ago “re-enacted the walk taken by our biblical ancestors through the wilderness.”

PREVIOUS: Some strides, but also shortcomings, seen by 1963 marchers

NEXT: Catholic’s White House work led to role as consultant for ‘The Butler’