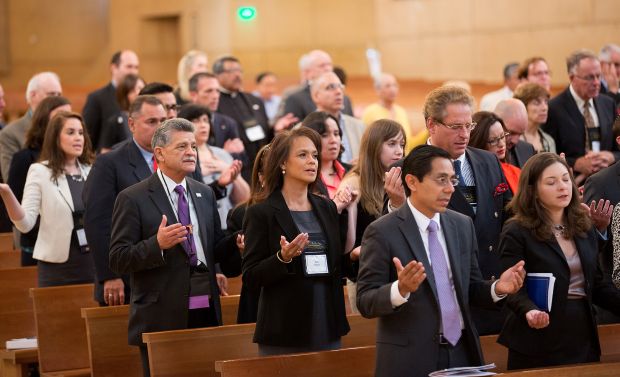 Members of the Catholic Association of Latino Leaders gather for Mass at the start of their annual meeting in Los Angeles Aug. 22. (CNS photo/Victor Aleman, Vida Nueva)

LOS ANGELES (CNS) — Peter J. Coulchinsky arrived in the United States from Argentina in 1986 as a young man seeking to earn a law degree. As his time in the U.S. lengthened, the more he decided he wanted to stay.

There was just one problem: He had only a student visa.

After graduation, however, he eventually obtained a green card, then his naturalization and an American passport, a goal for immigrants of many nationalities. Today, 27 years later, the Argentine global wealth adviser owns his own financial services firm, Texas Legacy Wealth Management in San Antonio.

Along the way, Coulchinsky — who was raised with strong Catholic values — met Archbishop Jose H. Gomez when he headed the Archdiocese of San Antonio. When he was invited to join the Catholic Association of Latino Leaders, Coulchinsky was elated. He said it was the organization’s interest in immigrants who, like him, could become productive members of American society based on solid Catholic values.

Coulchinsky told The Tidings, newspaper of the Los Angeles Archdiocese, that he especially valued Archbishop Gomez’s “passion and commitment to Hispanics, to the undocumented,” which he said reflected a “tangible perspective” of the church on that issue and others of interest to the Latino community.

The San Antonio businessman was one of nearly 200 people, including clergy, who attended CALL’s eighth annual conference hosted by its Los Angeles chapter. Coulchinsky said CALL is committed to “put the Gospel in action at the workplace, and in the political and social arenas.”

Chicago Cardinal Francis E. George told attendees the need for constant dialogue to accomplish its goals in life was imperative. He noted the need to counter the current “endemic anti-Catholicism” in the country.

“We cannot be passive,” the archbishop said. “The church calls us to be in the forefront of the church in America.” He suggested that “religion has to be carried by intentional religiosity,” not so much by “popular religiosity.”

Archbishop Gomez echoed Cardinal George in calling the leaders to become ever more active in bringing the values of their faith into public life.

“The future of the U.S. depends on what we (Latinos) do, influenced by our faith and by our sanctity,” said Archbishop Gomez during a friendly conversation with a group of local Catholic Spanish-language media covering the event. “We have to participate in the commercial life of the country, and it is important that we form our conscience and participate in the public square as well.”

As he has expressed in homilies, speeches and in a book, Archbishop Gomez said Americans constantly must be reminded that this country has its roots in the Catholic faith originally brought by Hispanics. 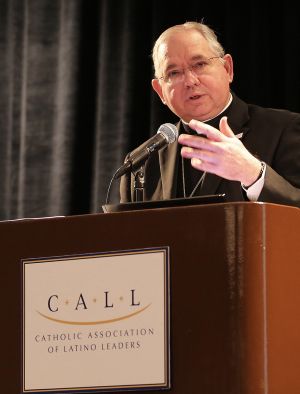 “Now is the time,” he stated, “to learn who we are, to decide to stay united and where we want to go.”

He said the base of the new evangelization, is to have a “holy pride, to be the best witnesses, leaders of our faith at the workplace, in the public square and at all the places we go.”

But to be successful, he said, Latino leaders must be knowledgeable about the Catholic faith, pray and attend, at the very least, Sunday Mass, “where we have a personal encounter with Christ at the moment of the Eucharist. What happens in Mass is very important for marriages, for families.”

Also addressing the conference was Philadelphia Archbishop Charles J. Chaput, who discussed the importance of faith in everyday life.

It was under that perspective that Archbishop Chaput joined Archbishop Gomez in launching CALL in 2007. Their goal was to create a professional organization that would support American Hispanic Catholic leaders, particularly in light of increasingly bleak statistics concerning Catholic Latinos in the U.S.

For example, American Latinos are leaving the Church “at a sobering rate,” said Archbishop Chaput. While almost 70 percent of foreign-born Hispanics are Catholic, only 40 percent of third-generation Hispanics in the U.S. identify as Catholic. In addition, the abortion rate among Latinas is currently higher than the national average, and Hispanic support for same-sex marriage rose from 31 percent in 2006 to 52 percent in 2012.

The archbishop reassured conference goers, an “immense reservoir of goodness and hope still resides in the world. We need to remember that and act on it.”

“(We launched CALL) to help Latino leaders renew the heart of an America that has become more and more confused, and more and more remote from its founding ideals,” he continued. “All of you here today are a testimony to what we hoped to accomplish. If CALL helps you strengthen each other in your Catholic faith and in your vocation as Christian leaders, then God will use it, and use you, to bring new life to our nation.”

For CALL member Ana Becerra, a physician’s assistant in private practice in Burbank, Calif., the conference reiterated the importance of her own role in “spreading the word of our Catholic faith to the Latino population.”

“It’s not just about what the church can do, it’s about what we as individuals can do to pass on our faith, touch just one person and get them to come back to the church,” Becerra said.

“How I behave is also going to pass on the faith, because if I act in a Christian manner and people see me this way, they can learn by my example,” she added.

Editor’s Note: More information about the Catholic Association of Latino Leaders is available online at visit www.call-usa.org or by calling (213) 637-7400.