Utah parish vandalized for the fourth time in two years 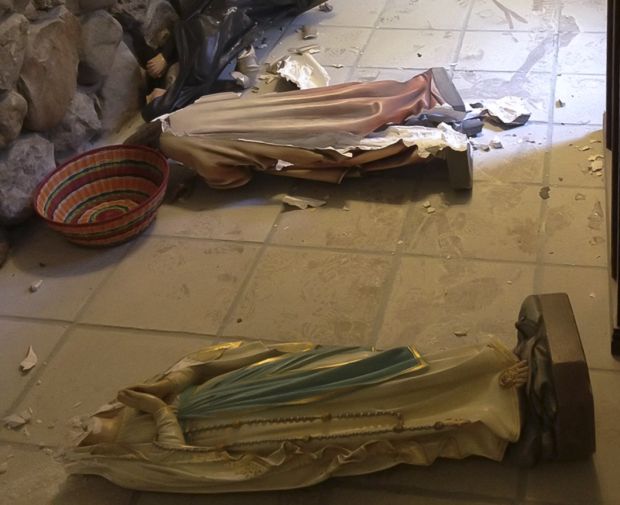 MAGNA, Utah (CNS) — Vandals kicked in the basement door of the rectory to break into Our Lady of Lourdes Catholic Church for the second time this year, smashing statues and glass doors and spraying a fire extinguisher throughout the chapel.

The intruders left behind blood stains, fingerprints and a cellphone, police said.

When Father Christopher Gray arrived at 8:25 a.m., to prepare for the Sunday liturgy, he saw people standing outside, some weeping, and police cars all around.

“Things were not looking good,” he said.

The pastor, Father Javier Virgen, was on vacation.

Inside the church, Father Gray found smashed benches and beer in the holy water font, but he was relieved that the tabernacle, containing the consecrated Eucharist, was locked.

The 9 a.m. Mass was canceled to allow police to finish their investigation.

Although parishioners were “somewhat rattled,” said Father Gray, “they wanted to start cleaning what they could without interfering with the crime scene.”

They wiped off pews, swept glass and cleaned the floors enough to celebrate the 11 a.m. Mass, after which they prayed the rosary in reparation for the destruction.

“This made us all sick and upset,” said Joanie Dobesh, a parish council member. “I could not believe the damage. They seem to know and strike when the priest is out of town. Last spring when Father Javier was away, they broke in through the boys’ bathroom window and sprayed the church with a fire extinguisher. When Father John Norman was pastor and out of town, vandals broke in and stole the luna out of the tabernacle. Both times they urinated in the chalices; this time they urinated on the walls.”

When Deacon Rick Huffman arrived at 8 a.m., he found garbage strewn across the yard, the door unlocked, the kitchen in ruin and smashed lights and computers, he said.

“They also stole a television from the rectory and all sacramental wine,” he said. “They are trying to destroy our faith, which is very important to us, but we are not going to let that happen. We’ll pray for them and hopefully they will see the light and change their ways. We are going to do the best we can and move on. This old rock church was built in 1928, and the church was enlarged in the 1940s. There are generations of families here. We are a community and a family here.”

Each time the church has been vandalized, the parish has taken action to prevent future occurrences.

“We have replaced windows and put bars on them, replaced doors, installed motion lights, and we have talked about an alarm system,” said Melanie Dern, parish finance director. “This time it has probably reached that point.”

It was the fourth time in two years that the church has been vandalized.

Young is associate editor at Intermountain Catholic, newspaper of the Diocese of Salt Lake City.

PREVIOUS: St. John’s U probe reveals ‘errors in judgment’ but no crime

NEXT: Latino leaders urged to put the Gospel in action at their workplace