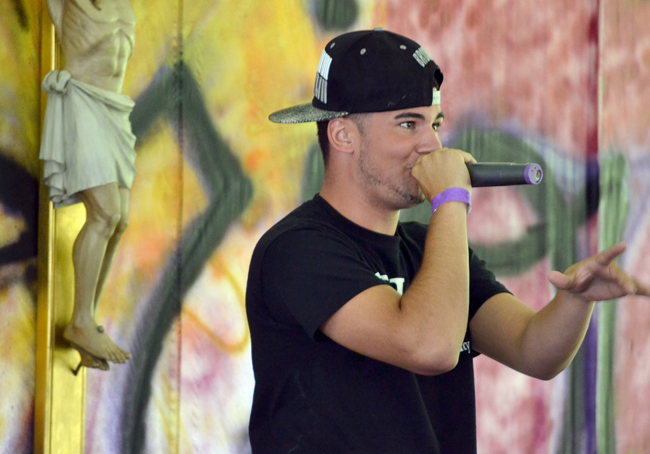 ALBANY, N.Y. (CNS) — A 20-year-old Schenectady, N.Y., Catholic is making a name for himself in the hip-hop and contemporary Christian music worlds. But he doesn’t care about his Facebook followers or fan mail.

In fact, being idolized is “the worst feeling,” said Cory Larmour, whose stage name is Cory Matthews. But the attention “lets me know there are more people out there hearing God,” he said. “I don’t care if it’s through me. It’s all about love.”

Larmour is a parishioner of St. Paul the Apostle Parish in Schenectady and a senior at Franciscan University of Steubenville in Steubenville, Ohio, majoring in theology and catechetics.

Inspired by a DJing father and a rapping cousin, Larmour has been recording, mixing and playing music since middle school and even had local success in rock and punk bands in his teens.

“Unafraid,” his first hip-hop album, was set for release in September. The songs all have a Christian perspective, but he shies away from calling himself a “Christian hip-hop artist.”

“A lot of people try to label music,” he said. But “you don’t really separate other music based on content.”

Larmour raised $2,500 to produce the album, which he hopes will shatter the stigma associated with hip-hop music.

“It’s true to a very good degree (that) all hip-hop is about gangs, violence, demeaning to women, pleasure-seeking,” Larmour said. “But that’s not hip-hop; that’s artists. Hip-hop was originally intended to be a voice.”

Hip-hop is “so much more raw and so much more blatant” than other genres, he said. “I’ve never seen music before that has a culture like hip-hop.”

Larmour aims to “make music that’ll be encouraging and uplifting — alternative to what’s current right now,” much of which is “degrading and tears people down,” he said. His songs criticize promiscuity, tell women they don’t have to be perfect and men to treat women well and inspire hope in hard times.

In his younger days, Larmour’s songs were positive and clean, but not religious. Though he grew up Catholic, he says his Mass attendance was “robotic” and “no different than going to a basketball game,” and he only joined the youth group “for pretty girls” and social time.

He started taking his faith seriously during his freshman year of college, which began at the University of New Haven in Connecticut, for music and sound engineering. He had been DJing at clubs every night and taking a break from church, and “wasn’t living very virtuously.”

After a friend who was a devout Baptist died in a stabbing one night, Larmour decided to return to Mass.

“God just really spoke to me that day,” he recalled. “It was the first time it really felt real.”

Larmour started reading the Bible and books by Catholic writers. He spent a semester at The College of Saint Rose in Albany before transferring to Franciscan, which he calls “very boldly Catholic.”

In Steubenville, he discovered a passion for working with troubled teens through volunteering at jails and Dirty Vagabond Ministries, which serves inner-city youth. Now, he speaks at teen and college conferences around the country.

Kids today, he believes, “give up and sacrifice a lot for everything but God.” They’re open to hearing that God loves them, but stop short of picking up the cross and following Jesus, he said.

But “all the stuff that he’s asked of us, he’s already fulfilled,” Larmour tells teens.

He believes “grace subsists in the Catholic Church.” Some non-Catholic Christian artists have refused to work with him over disagreements about the pope, Mary, saints and the Eucharist, but “every chance I get, I try to explain,” he said.

After Larmour graduates, he may work in youth ministry or public speaking for a living with music on the side, or vice versa. Though he has meetings lined up with record labels, he says he’ll do anything that’s “God-driven and compelling.”

NEXT: USCCB leaders join pope’s call for day of fasting, prayer for peace