Number of permanent deacons grows, but many reaching retirement age 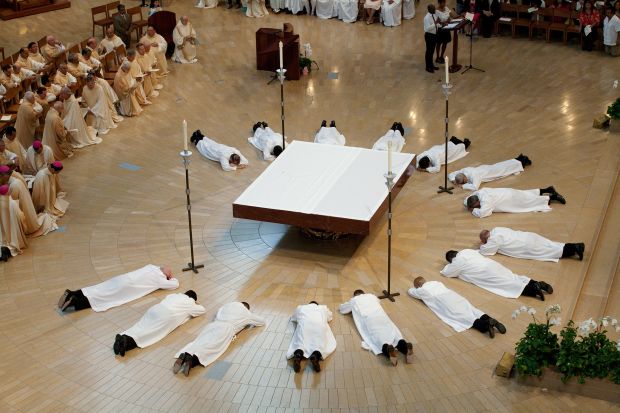 WASHINGTON (CNS) — While the number of permanent deacons keeps growing, those ordained to the permanent diaconate are steadily reaching retirement age, with a need to replenish their ranks, according to a study released Aug. 6 on the diaconate.

There are more than 18,000 permanent deacons in the United States, including more than 15,000 who are active in ministry, according to the study conducted by the Center for Applied Research in the Apostolate.

However, more than two-thirds of active deacons — 68 percent — are at least in their 60s, with 25 percent of all deacons at least 70. Thirteen percent of U.S. dioceses have a mandatory retirement age of 70 for deacons; 80 percent mandate retirement at age 75.

“The statistics are encouraging,” said an Aug. 6 statement by Archbishop Robert J. Carlson of St. Louis, chairman of the U.S. bishops’ Committee on Clergy, Consecrated Life and Vocations. “But they also alert us to the fact many of the deacons will soon reach retirement age. This suggests a need for bishops to recruit a greater number of men to join the ranks of the permanent diaconate.”

Of the 195 U.S. dioceses and eparchies, only two have no permanent deacons. Of those that do, CARA received information from 145, or 75 percent, or them, and extrapolated the data to provide a nationwide picture.

According to the CARA survey, by Mary L. Gautier and Carolyne Saunders, most permanent deacons work for a living at their job or profession. Only 21 percent derive income from full-time ministry.

Deacons are not as ethnically diverse as the overall U.S. Catholic population, but they are more diverse than Catholic priests. Seventy-eight percent of active deacons are non-Hispanic whites, while 15 percent are Hispanic, and 3 percent each are African American or Asian. The priest percentages are 92 percent non-Hispanic white, 3 percent Hispanic or Asian, and 2 percent African American or black.

Ninety-four percent of dioceses have a staff position for a director of the diaconate. In 41 percent of those dioceses, the job is full-time.

Although the CARA survey did not report on deacons’ job satisfaction, some deacons reported –in essays supplied by the U.S. Conference of Catholic Bishops in conjunction with its release of the CARA study — happiness with their life and ministry.

“My biggest challenge has been to balance family, professional and diaconal responsibilities,” said Deacon Tim Weinmann of the Diocese of Lexington, Ky., who is an executive project manager at IBM and a deacon at the 2,500-family cathedral parish, Christ the King. “It’s hard saying no when you have the privilege of being invited to say yes to so many good choices.”

“Ordination changed my life,” said Deacon Arnaldo Antonio Santos of the Diocese of Camden, N.J., a retired police detective who now does gang outreach. “I have seen individuals lost to the gang world return to the church, repent, receive the sacraments and be freed from the bondage of the gang world. It happened when I was able to guide them with prayer, patience, moderation and brotherly love.”