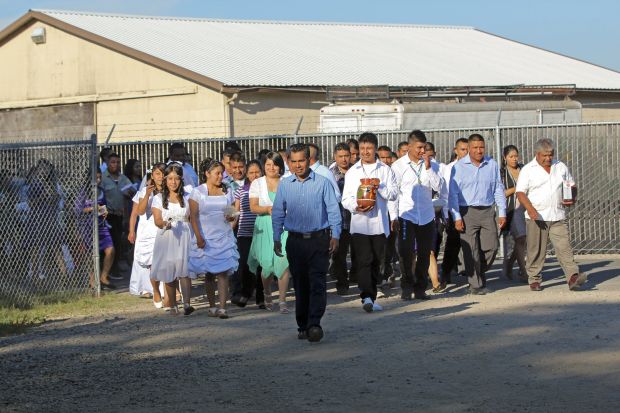 GRESHAM, Ore. (CNS) — They come to Oregon’s fields with hope and faith.

Each night, St. Anne Parish’s pastoral associate Corina Carsner visits a community of itinerant workers who come from California and other agricultural areas to pick crops during harvest season. She invites the workers and their families to participate in formation classes, which she leads at the camps.

Many of the migrant workers gathered Aug. 5 for a confirmation Mass celebrated by Portland Archbishop Alexander K. Sample. The service was held at the Townsend Farm labor camp, where hundreds of people live during Oregon’s growing season.

“This has been a great opportunity to bring this community closer together and closer to the church,” said Father Jose Luis Gonzalez, St. Anne’s pastor. “I wish they could come to the parish, but they work very hard and stay here, so we come to them.”

Approximately 40 people were confirmed at the Mass, which provided a special break from grueling work schedules. Many of the residents work 12 hours a day, seven days a week, while bunking with eight or nine others in mobile homes.

Volunteers from St. Anne helped set up the special Mass, celebrated under the canopy of an enormous horse chestnut tree.

At the start of the Mass, migrant workers entered the ceremony space in a silent procession, with candidates in white. Their hands, which spend so many hours toiling in the fields, carried white Bibles, rosaries and candles.

Archbishop Sample, who was installed in the archdiocese in April, has been a fast study of the second-most predominant language in his new home. He celebrated the entire Mass in Spanish. He started his homily by saying, “I’m sorry, I don’t speak Spanish. Patience please,” but the faithful who gathered under the tents understood his message that the Holy Spirit and their faith would give them the strength they need, especially during hard times.

St. Anne’s parochial vicar, Father David Shaw, concelebrated the Mass with the archbishop and Father Gonzalez, and Deacon Jose Gonzalez assisted. Father Shaw said he has loved being a part of this important tradition while he has served at St. Anne.

Rocio Garcia said she felt honored to have Archbishop Sample come to the camp.

“It made me feel like I was in my little village (in Mexico) where we received the sacraments in the field,” she said. “We received the catechesis in an outdoor camp like here.” Garcia’s daughter Alexandra was an altar server during the ceremony.

Carreno, 18, said the once-in-a-lifetime celebration of his faith made him happy.

About his sponsor, he said: “She always gave me good advice, and she was there for me, making sure my life is good and my Catholic faith is strong.”

Carreno arrived at the migrant camp Feb. 17 by himself. His family remains in Oaxaca, Mexico, and despite workdays that start at 5 a.m. and end at 4 p.m., he often feels lonely.

“I came here to have a better life, but this is hard,” he said. “I know this work because I did it in Mexico. But it’s hard. I have a constant back pain because we have to be on our knees while we pick the berries.”

Santiago is a contract worker who is paid to pick by weight, 30 cents per pound of berries. In one day she can pick 200-300 pounds.

Santiago will leave at the end of the harvest season, and a new group will come next year. Carsner and the St. Anne’s team will be there to help strengthen their faith.

Rios is editor of El Centinela, the Spanish-language newspaper of the Portland Archdiocese.