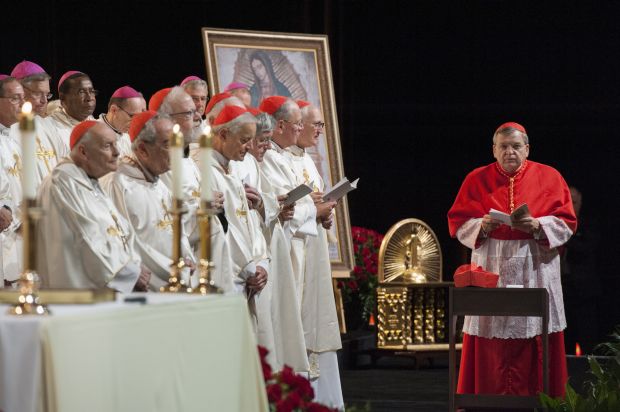 SAN ANTONIO (CNS) — Boston Cardinal Sean P. O’Malley highlighted the new evangelization in the pontificate of Pope Francis in an Aug. 6 keynote address to the Knights of Columbus supreme convention in San Antonio.

“Following Pope John Paul and Pope Benedict, Pope Francis is challenging us to embrace the new evangelization with new ardor, with new boldness and with great love for all those who God places in our path. He is calling on all of us to be missionaries in our own communities,” he said.

“In this new millennium, business as usual is not enough. We must be a team of missionaries, moving from a maintenance mode to a missionary one,” he added.

He told his listeners they must ask themselves, “What does it mean to live in a culture of unbelief; a culture which does not even know it does not believe because it still lives on the residue of Christian civilization?”

Cardinal O’Malley replied, “Pope Francis is ever warning against a self-referential church turned in on itself. He tells us to open the doors, to invite other in and so that we can go out and invite.”

The cardinal emphasized that being a faithful disciple of Jesus Christ in the Catholic Church “is much more than a head trip.” It is a way of life together; and the whole person is engaged in the process.

Education for the journey must therefore be experiential, personal, engaging and life-giving, he added. “We learn discipleship the way we learn a language, by being part of a community that speaks that language. The Boston archbishop stressed that young Catholics must be mentored in the faith by others, either peers or older Catholics who are walking the walk.

“In today’s world, we must promote the Catholic way of life, which is increasingly alien in the secular world, where our concern about unborn children or the sacredness of marriage makes us appear quaint and even nettlesome,” he explained. “We need mentors: parents, grandparents, godparents, teachers, youth ministers, neighbors, who are ready to pass on the faith.”

According to the cardinal, Pope Francis is calling on Catholics to embrace the vision of reality that is the church’s faith and that values each and every human being, and stresses responsibility to love and serve each other, especially the most vulnerable.

The word that Pope Francis repeats over and over, he said, is “tenerezza,” or tenderness.

In his inaugural Mass on the feast of St. Joseph, Cardinal O’Malley recalled, the pontiff spoke about protecting people, showing loving concern for each and every person, especially children, the elderly, those in need. The pope said, “We must not be afraid of goodness or tenderness.”

“He points to the heart of Joseph, his tenderness which is not the virtue of the weak but a sign of strength of spirit and a capacity for concern and compassion, for genuine openness to others, for love,” said the cardinal.

Noting that “some people think that the Holy Father should talk more about abortion,” Cardinal O’Malley said he thinks Pope Francis “speaks of love and mercy to give people the context for the church’s teaching on abortion. We oppose abortion, not because we are mean or old-fashioned, but because we love people. And that is what we must show the world.”

He continued, “We must be better people; we must love all people, even those who advocate abortion. It is only if we love them that we will be able to help them discover the sacredness of the life of an unborn child. Only love and mercy will open hearts that have been hardened by the individualism of our age.”

In reference to the United States as being an immigrant church, Cardinal O’Malley spoke of the significance of the Holy Father’s first trip as pope to the Italian island of Lampedusa to underscore his concern for the plight of immigrants.

“When the Holy Father went to the island of Lampedusa, he threw a wreath of flowers into the sea where thousands of refugees have perished in the modern day coffin ships that bring refugees from North Africa,” said the cardinal, noting that Pope Francis talked about the globalization of indifference — indifference to the suffering of others, to the fate of the unborn, the elderly, the handicapped, the mentally ill and the immigrants.

We must overcome this indifference and help people to see that the church’s teaching is about loving and caring for everyone, he explained, quoting the pope who told the Brazilian bishops at World Youth Day: “We need a church capable of rediscovering the maternal womb of mercy. Without mercy we have little chance nowadays of entering the world of wounded persons in need of understanding, forgiveness and love.”

Added Cardinal O’Malley, “The truth isn’t a wet rag that you throw in someone’s face, but a warm cape that you wrap around a person, to protect and strengthen them.”

The prelate cited the post-abortion ministry Project Rachel as being the kind of combination of mercy and truth that the church’s pro-life efforts need to be about.

“Our efforts to heal the wounds of society will depend on our capacity to love and to be faithful to our mission,” the cardinal insisted.