Some strides, but also shortcomings, seen by 1963 marchers 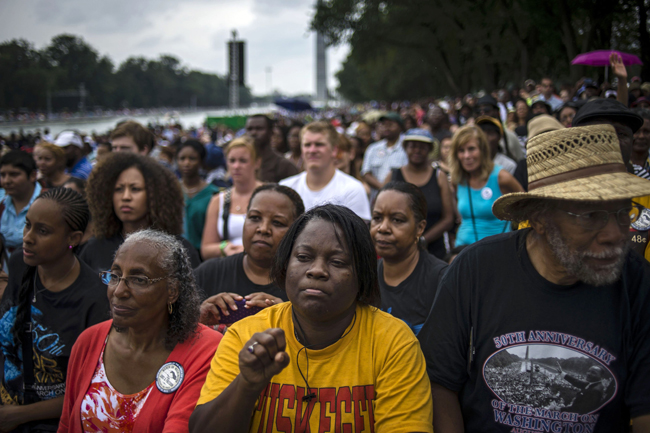 WASHINGTON (CNS) — Cordelia Coleman was just 12 when she went 50 years ago to the first March on Washington with her mother, father, sister and brother.

Fifty years later, Coleman was accompanied by her son Ronald to the second of two marches commemorating the original march in 1963. The Aug. 28 march capped a week of activities surrounding the march, cemented into history by the Rev. Martin Luther King Jr.’s “I Have a Dream” speech.

Coleman wore a Washington Interfaith Network T-shirt to the march; her parish was one of the network’s original members when it was formed in the mid-1990s. As a 1963 marcher, Coleman was eligible to wear a maroon sash marking her own status with an automatic invitation to march in the front. But so many 1963 marchers had ascended to the top step of the Georgetown University Law Center, the starting point for the march, that march organizers had run out.

Coleman also noted some societal shortcomings in the past half-century, among them the high school dropout rate and the college entry rate for blacks, and the way society deals with racial issues. “Subtle in a way, and sometimes not so subtle,” she said. “I think President (Barack) Obama’s been disrespected as well. A lot of that has to do with the fact that he’s African-American.”

Ronald Coleman acknowledged his mother’s role in “making me very aware that the issues are still with us today” that set the 1963 march into motion, among them voting rights and employment. He also credited his mother with instilling in him a sense of black history; he remembered being a substitute on the “Black Pursuit” team while a student at DeMatha Catholic High School in the Washington suburb of Hyattsville, Md., “and I seemed to know more than the guys on the team.”

The Aug. 28 march was considerably smaller than the Aug. 24 march, where people were invited to congregate close to the Lincoln Memorial. The weekday nature of the Aug. 28 march — Aug. 28, 1963, was a Saturday — and a periodic light rain may have kept people away.

But the Aug. 28 march, while not festive, had high spirits, as the route was punctuated with chants and songs from the civil rights era. Marchers paused in front of the Labor Department and Justice Department headquarters buildings for a moment of silence. The proceeded to the National Mall, where they were joined by thousands of others already gathered near the Lincoln Memorial to hear from a high-powered roster of speakers, including Obama, former Presidents Bill Clinton and Jimmy Carter, Oprah Winfrey, Caroline Kennedy, and Rep. John Lewis, D-Ga., the only surviving speaker from the 1963 march.

Even the seemingly interminable wait to go through security lines to get close to the Lincoln Memorial program did not deter the marchers.

“My mother was in the march in 1963,” said Daria Bermudez, who earned her master’s degree in social science at Fordham University and came in from New York City for the march. “Her generation passed the torch, and now it’s my turn to carry the torch.”

Bermudez added, “I wouldn’t have gotten the education I’ve gotten without my mother. I wouldn’t be the person I am today without her.”

She said she wanted to “carry a sense of attainment, a sense of knowing what needs to be done, fighting for fundamental change.”

George Smith, 21, of Houston, a senior English major at Georgetown University, said he wanted to take part in the march according to “the Catholic Jesuit values” he learned at Georgetown: “community in diversity, contemplation in action, and women and men for others.”

Another Georgetown senior, Marisa Tersy of West Orange, N.J., said she wanted her “takeaway” from this march — she was also at the Aug. 24 march — to be that “we need to keep fighting for social change. Justice has not truly been served. … The people who fought in ’63 kept on fighting, just like I want to.”

PREVIOUS: The summer of immigration groundwork: working toward passing a new law

NEXT: At interfaith service, calls made to continue search for justice