Against the tide: the pope rallies a counterculture 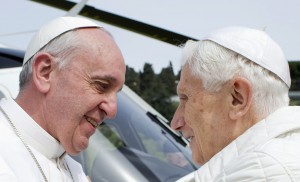 Pope Francis greets retired Pope Benedict XVI in late March at the papal summer residence in Castel Gandolfo, Italy. Both popes have called on Catholics to swim against the tide. (CNS photo/L’Osservatore Romano via Reuters)

VATICAN CITY (CNS) — At a weekly public audience earlier this year, the pope underscored one of his characteristic themes: the countercultural implications of membership in the church.

“Belief in God makes us bearers of values that often do not coincide with the fashion and opinion of the moment, and calls on us to adopt standards and behaviors that do not belong to the common way of thinking,” he said. “The Christian should not be afraid to swim against the tide to live his own faith, resisting the tendency to conform.”

More recently, the pope used similar language when urging young Catholics to commit to the sacrament of marriage.

“In a culture of relativism and the ephemeral, many preach the importance of enjoying the moment,” he said. “I ask you, instead, to be revolutionaries, I ask you to swim against the tide; yes, I am asking you to rebel against this culture that sees everything as temporary and that ultimately believes you are incapable of responsibility, that believes you are incapable of true love.”

The first quotation is from Pope Benedict XVI, at the Vatican in January; the second from Pope Francis, in Rio de Janeiro July 28. Of the many strands of continuity between the two men’s pontificates, none is clearer than their common conviction that Christian faith puts the believer at odds with the materialist “idols” of today’s secular society.

On that basis alone, one might have expected these avowed countercultural leaders to attract similar degrees of hostility, or at least disdain, from the dominant culture. But, in fact, their experiences in this regard have been starkly opposed.

Throughout Pope Benedict’s eight-year pontificate, secular media outlets routinely portrayed him as backward or bigoted for his defense of traditional Catholic teaching, particularly on moral questions.

By contrast, it is hard to imagine any pope today enjoying better press than Pope Francis, especially in normally unsympathetic quarters. Time magazine recently celebrated him on its cover as the “people’s pope,” and a blogger for Esquire, a fashion magazine dedicated to the sort of aspirational consumerism that the pope deplores, pronounced in a headline that “It’s Time to Admit: Pope Francis Is Kind of Awesome.”

This difference in reception is partly explicable as a matter of personal style. Retired Pope Benedict is a shy, introverted scholar, whose talks and writings, though never needlessly obscure, were formally composed and intellectually demanding, and made frequent and wide-ranging reference to the cultural heritage of the West.

Pope Francis, on the other hand, is gregarious and spontaneous, with a conversational style of preaching that draws heavily on proverbs and folk wisdom. Though he is not in any sense a media creation, his personality and manner are better suited to the age of social media, which tends to be suspicious of traditional authority and impatient with complex arguments.

Yet the strikingly different responses that the two popes have drawn from secular culture are not just a consequence of how they communicate, but also of what they have chosen to say.

Pope Benedict was most reviled when he spoke out on questions of sexual and medical ethics, invoking natural law and church teaching to deny what secular culture has come to assert as practically unlimited personal freedom.

In these areas, Pope Francis is hardly more in sync with prevailing values than his predecessor was. In 2010, then-Cardinal Jorge Mario Bergoglio called same-sex marriage an “anti-value and an anthropological regression,” and said the immorality of abortion should be clear on scientific evidence alone, even in the absence of religious faith.

But since he became pope, he has been notably reticent on these matters. In his homily at a Vatican Mass dedicated to pro-life causes in June, Pope Francis did not refer to abortion, euthanasia or any other specific threat to life.

During his visit to Brazil, July 22-28, he said nothing about the country’s recent legalization of same-sex marriage or moves to liberalize abortion, explaining to reporters on the plane back to Rome that the “church has already expressed itself perfectly on that.”

When, during the same in-flight press conference, the pope cited the Catechism of the Catholic Church to denounce the marginalization of gay people, he did not also cite the catechism’s statement on the immorality of homosexual acts.

Pope Francis has been more assertive and explicit when denouncing social injustice, as when he described the condition of textile workers in Bangladesh as “slave labor,” or condemned “ideologies which uphold the absolute autonomy of markets and financial speculation” — statements with discomfiting implications for the consumerism of rich western nations.

Yet, except for calls to greater austerity by bishops and priests, the pope has not focused his criticism on the personal lifestyles of his listeners. For instance, he has not repeated his words to an interviewer, a few months before his election, denouncing the billions wasted on cosmetics and “idolized” household pets in a world where children in underdeveloped countries starve to death.

It is hard to believe that Pope Francis, who has moved boldly and swiftly to reform the Vatican bureaucracy surrounding him, is avoiding certain topics in public merely out of fear of upsetting people. It is more plausible, and more consistent with his style of communication, that he is making overtures to those who have closed their minds and hearts to the church.

If the pope sees the church as a counterculture, then he sees it as one necessarily in dialogue with the cultures to which it is opposed, all of them part of what he calls a great “culture of encounter.” To reach out in this way follows naturally from his call that the church evangelize all those on its “existential peripheries.”

The extraordinary curiosity and good will Pope Francis has elicited in his first few months could now offer the church an unprecedented opening for such a process, which, like any honest dialogue, will inevitably entail the expression of hard as well as happy truths.