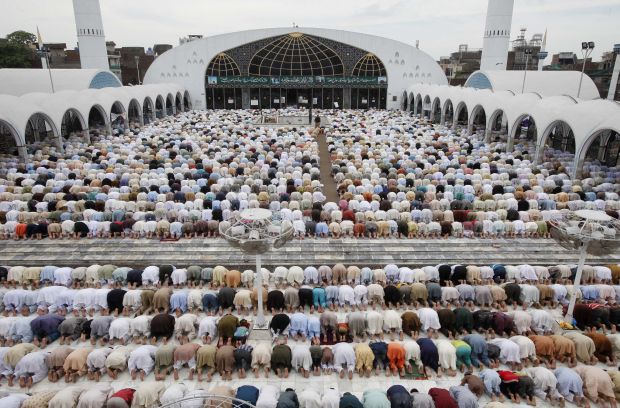 Muslim worshippers attend Friday prayers during the holy month of Ramadan at the Data Darbar mosque in Lahore, Pakistan, Aug. 2.

VATICAN CITY (CNS) — As a sign of his “esteem and friendship,” Pope Francis said he personally wanted to write this year’s Vatican message to Muslims about to celebrate the end of their monthlong Ramadan fast.

The pope’s message, released by the Vatican Aug. 2, focused on the need for Catholics and Muslims to promote respect for one another, especially through the way they educate their youth.

Catholics and Muslims must respect “the religion of the other, its teachings, its symbols, its values,” he said. “Particular respect is due to religious leaders and to places of worship. How painful are attacks on one or other of these!”

Most Muslims around the world will begin their Eid al-Fitr celebrations marking the end of their 30-day fast Aug. 7 or 8. Since 1973, the Vatican has sent formal greetings to Muslims to mark the feast and propose a theme for common reflection. The message is distributed by Vatican diplomats and by Catholic leaders taking part in Eid celebrations.

Usually the president and secretary of the Pontifical Council for Interreligious Dialogue sign the message, but in 1991, after the Gulf War, Pope John Paul II wrote the message himself, expressing condolences to all who lost loved ones in the war and calling for a new commitment to peace, dialogue and ensuring that “each one everywhere will be able to profess freely and authentically his or her own faith.”

In his message, Pope Francis said that “what we are called to respect in each person is first of all his life, his physical integrity, his dignity and the rights deriving from that dignity.”

Catholics and Muslims also must respect the reputation of the other, “his property, his ethnic and cultural identity, his ideas and his political choices,” he said.

Education is essential in helping Catholics and Muslims grow in knowledge of and respect for each other, he said, and “families, schools, religious teaching and all forms of media have a role to play in achieving this goal.”

Pope Francis said that in offering each other best wishes for major religious celebrations, people of different faiths do not have to worry that they may be seen as somehow accepting the faith tenets of others.

“When we show respect for the religion of our neighbors or when we offer them our good wishes on the occasion of a religious celebration, we simply seek to share their joy, without making reference to the content of their religious convictions,” he said. “I send you my prayerful good wishes, that your lives may glorify the Almighty and give joy to those around you.”

PREVIOUS: Slovenian archbishops resign because of ties to financial collapse

NEXT: Against the tide: the pope rallies a counterculture