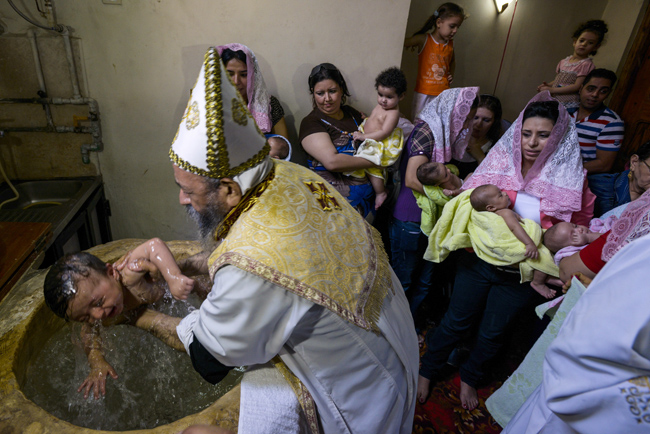 A priest baptizes a child at the Coptic Orthodox Church of the Virgin Mary in the Maadi suburb of Cairo, Egypt, Aug. 25. Christians make up between 10 and 15 percent of Egypt's 82.5 million people, who are predominantly Sunni Muslim. (CNS photo/Dana Smillie)

CAIRO (CNS) –The Coptic Orthodox Church of the Virgin Mary sits in a tiled courtyard a few miles outside Cairo, on the left bank of the Nile as the river bends south toward Upper Egypt.

The structure’s front doors overlook the famed river, which Egyptian Christians who pray and worship here are convinced transported Mary, Joseph and their small boy, Jesus, to safety from persecution back home.

“In those times, this was a dock area from where the boats took off for Upper Egypt. The Holy Family came here from Palestine and got on one,” explained one of the church’s five priests, from an office overlooking the water.

Like the priest, many Copts — the name for Egypt’s indigenous Christians — trace their religion all the way back to Jesus who, according to the Gospel of St. Matthew, sought refuge in their country from the wrath of Herod the Great 2,000 years ago.

Coptic tradition holds that Christ stayed in Egypt for three years and that later, around the year 42, St. Mark the Evangelist also came to evangelize in the Egyptian port city of Alexandria, before being martyred there.

Christianity continued to spread among the locals called “Copts,” a derivative from the Greek word for Egypt, and by the third century, Christianity was the country’s dominant religion. By the time the newer religion of Islam arrived in Egypt in the middle of the seventh century, Egyptian Christianity had already provided the church with some of the world’s major Christian saints and had introduced new forms of monastic life.

“The history of the Coptic Church is both glorious and tragic,” wrote Otto F.A. Meinardus in his authoritative book on Egyptian Christianity, “Christians in Egypt.” 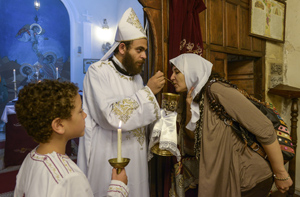 A priest gives Communion during Sunday liturgy at the Coptic Orthodox Church of the Virgin Mary in the Maadi suburb of Cairo Aug. 25. (CNS photo/Dana Smillie)

“Glorious,” he wrote “in the number of her illustrious sons, such as Sts. Athanasius, Cyril, Anthony, and Pachomius, to mention but a few; and tragic in the vast number of her children, who in the various persecutions suffered martyrdom for their adherence to the Christian faith.”

Today, Egypt’s Christians represent the largest Christian minority group of the Middle East and North Africa, and they number anywhere from 10-15 percent of Egypt’s 82.5 million people, who are predominantly Sunni Muslim.

The vast majority of Egypt’s Christians are Coptic Orthodox, but there are other local Christian groups, including Protestants and Catholics from various Eastern Catholic rites.

Egypt’s Coptic Catholic Church is the largest of the Catholic rites in the country and accounts for as many as 300,000 faithful.

Both Coptic Catholics as well as Coptic Orthodox refer to their respective leaders as “patriarch of Alexandria” and see themselves as the “original” Egyptians because of their ancient ties to the land.

“A Copt is an Egyptian par excellence. Add to this the fact that the Coptic Church … is essentially a national church, identified with Egypt,” said Catherine Mayeur-Jaouen, who has written extensively on Egypt, Islam and the Coptic churches.

The Copts’ deep roots in Egypt are reinforced all the more so because until today, they have been as present in the Egyptian countryside as they are in cities, as opposed to other Christians of the Middle East who are mostly urban, said Mayeur-Jaouen, who teaches Middle Eastern History at the National Institute for Oriental Languages and Civilizations in Paris.

“We are the original inhabitants on Egyptian soil, because we were here before anyone, and before Islam,” said the priest from the Orthodox church on the Nile, Father Tadros Youssef.

Tension between Egypt’s Copts and Muslims has long been a problem, but recently it has dangerously spiked, first since President Hosni Mubarak’s overthrow by popular revolt in 2011, and even more so since the military’s July 3 ouster of Islamist President Mohammed Morsi.

Morsi was aligned with the Muslim Brotherhood, whose members the Egyptian military is now pursuing.

Violence has surged even further since Aug. 14, when security forces raided two pro-Morsi protest camps in Cairo, which killed hundreds of people, most of them protestors.

Church leaders and independent human rights groups have recorded attacks on dozens of churches, schools, buildings, homes and other institutions belonging to Christians. Some non-Christian institutions have also come under attack in the violence, including government and security offices.

Egypt’s military and interim government have condemned all the attacks, calling them the “work of terrorists,” and blaming them on the Muslim Brotherhood and other pro-Morsi groups.

Coptic Orthodox Pope Tawadros II and Coptic Catholic Patriarch Ibrahim Isaac Sedrak have openly supported the military, which is part of reason their communities are being attacked, observers note.

Coptic Catholic Father Yuhanna Boulas, Arabic for John Paul, said that on the day the pro-Morsi camps were raided in Cairo, his parish in the town of Az-Zarabi in southern Egypt was threaten by an angry mob.

Still, he said many Copts had been trying to leave Egypt in a quest “for more security” abroad, especially since the 2012 election of now-disposed Morsi.

“And we are witnessing church burnings,” he said, surmising that even more Copts would consequently be tempted to immigrate.

Back at the Church of the Virgin Mary, the Sunday liturgy was full and incense filled the air. Men in robes chanted in ancient Coptic, long since defunct as Egypt’s vernacular but still used for Coptic liturgy. Young families arrived with newborns to baptize.

Off in a church annex, Samir Ebrahim, 65, prayed alone in front of a Bible, which was in a framed case on the wall, with an inscription above it.

“This Bible was found floating on the water, opened on the page that reads ‘Blessed be Egypt my people,'” Ebrahim told an inquisitive reporter.

“I hope Egypt will get better and better,” he said, and resumed praying. 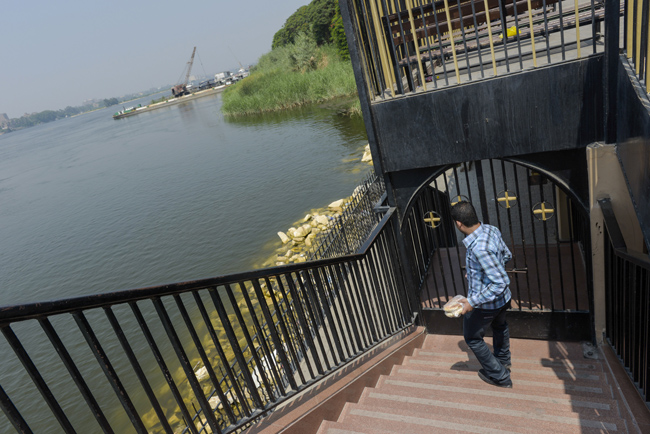 A man walks down step leading to the Nile at the Coptic Orthodox Church of the Virgin Mary in the Maadi suburb of Cairo, Egypt, Aug. 25. The church sits on the left bank of the river, which Egyptian Christians who pray and worship there are convinced transported Mary, Joseph and Jesus to safety from persecution back home. (CNS photo/Dana Smillie)

NEXT: Nations ponder what to do about chemical attack in Syria