Nations ponder what to do about chemical attack in Syria 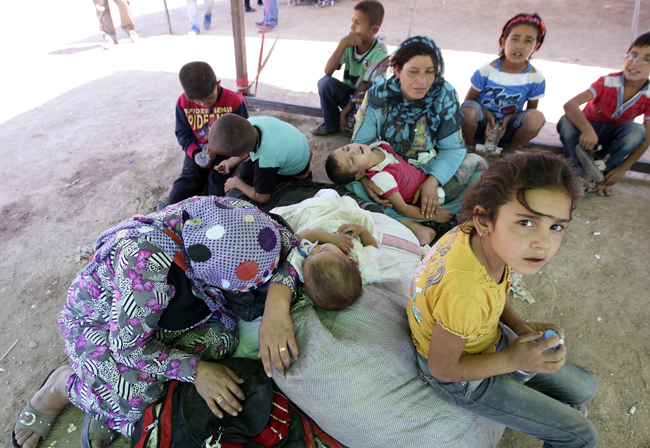 WASHINGTON (CNS) — President Barack Obama and Secretary of State John Kerry were consulting with other world leaders about how to respond to Syria’s apparent chemical weapons attack on civilians.

On Aug. 26, Kerry called the Aug. 21 attack an inexcusable and undeniable “indiscriminate slaughter of civilians, the killing of women and children and innocent bystanders, by chemical weapons,” and a “moral obscenity.” A full report from the administration on the evidence pointing to a chemical attack was expected to be released later in the week.

White House statements referenced Obama’s calls with the prime ministers of Canada and Australia, and Kerry said he had been speaking with foreign ministers around the world about the situation.

The most recent statement on the Syrian conflict from U.S. Catholic leaders came in June. Then, Bishop Richard E. Pates of Des Moines, Iowa, chairman of the U.S. bishops’ Committee on International Justice and Peace, and Bishop Gerald F. Kicanas of Tucson, Ariz., chairman of the board of Catholic Relief Services, called for the United States to seek a negotiated cease-fire in the civil war rather than arming combatants.

Citing Pope Francis’ Easter plea for peace in Syria, they said the suffering of civilians would be best addressed if fighting ended.

Meanwhile, British Prime Minister David Cameron was convening an emergency session of Parliament to consider a motion allowing a British military response to the chemical attack.

In the U.S., some members of Congress of both parties were urging Obama to consult with them before any military action against Syria. Both houses of Congress are in recess, however, and are scheduled to resume business Sept. 9. Kerry and White House chief of staff were reported to be talking with congressional leaders about how to proceed with a response to Syria.

Defense Secretary Chuck Hagel said Aug. 27 that the U.S. military stood ready to strike at Syria as soon as Obama gave the order. And U.N. weapons inspectors for a second day were unable to reach the area of the suspected chemical weapons attack because of the danger. Vehicles in which the were trying to reach the region on Aug. 26 were hit by sniper fire and they turned back.

In the Aug. 27 White House press briefing, White House spokesman Jay Carney said the use of chemical weapons is opposed by 188 nations, in addition to the U.S., which have signed a convention to that effect, and that those countries have a stake in making sure such norms are respected.

The actions followed an Aug. 21 attack on the town of Ghouta, not far from the capital Damascus, a stronghold for opponents of the government of Syrian President Bashar Assad. Hospitals reported treating thousands of people suffering with symptoms consistent with a poison gas attack. Videos and photos posted to the Internet showed children gasping for breath. The group Doctors Without Borders put the death toll at 355.

Assad denied using chemical weapons. But Kerry noted that despite the Syrian government’s offer of transparency to prove the attack claims were false, “instead, for five days, the Syrian regime refused to allow the U.N. investigators access to the site of the attack that would allegedly exonerate them. Instead, it attacked the area further, shelling it and systematically destroying evidence. That is not the behavior of a government that has nothing to hide. That is not the action of a regime eager to prove to the world that it had not used chemical weapons.”

Meanwhile, Catholic bishops in Syria weighed in with calls to cautious action.

Archbishop Mario Zenari, the Vatican nuncio to Syria, told Vatican Radio Aug. 25 that looking at the images of the alleged chemical attack, “I hear the cry of these children, these innocent victims.”

At the same time, he said he prayed that the leaders of both sides in the conflict as well as leaders in the international community “would be gifted with much wisdom and much prudence” as they decide how to move forward.

“We must do so in a way that these crimes, these massacres never happen again,” the archbishop said. “We must find the most appropriate and opportune means to react, ways that will not complicate the situation.”

Chaldean Catholic Bishop Antoine Audo of Aleppo told Vatican Radio Aug. 26 that Pope Francis was calling for a real commitment by the international community to encourage dialogue and negotiations in Syria.

“If there were a military intervention, I think this would lead to a world war,” the bishop said. “There is this risk.

“Let’s hope that the pope’s appeal will promote a real dialogue between the parties in conflict,” he said. The objective must not be more fighting, but acting so that “the people will be free to move around, travel, communicate (and) work.”

“This is what we hope for: an international effort that will help dialogue and not make war,” he said.