His Holiness, the soccer fan, asks players to be real role models 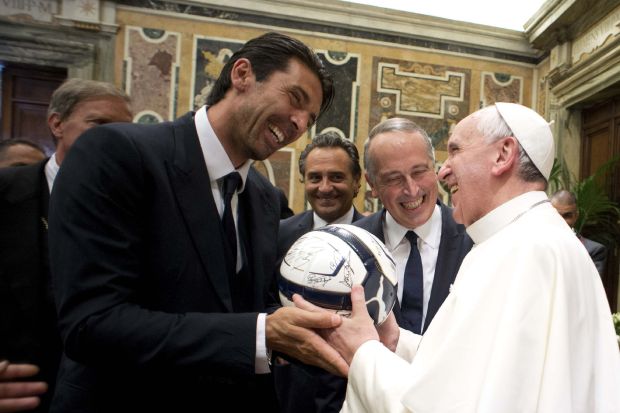 Pope Francis receives a soccer ball as gift from Italy's goalkeeper and captain, Gianluigi Buffon, during a private audience at the Vatican Aug. 13. (CNS photo/L'Osservatore Romano via Reuters)

VATICAN CITY (CNS) — With admiration and big smiles all around, the lifelong soccer fan Pope Francis met the star players and coaches of the Argentine and Italian national soccer teams hoping to compete for the World Cup in 2014.

The two teams were in Rome to play a “friendly” match in the pope’s honor Aug. 14; the game has no bearing on the process of qualifying for the World Cup tournament.

Pope Francis said he was relieved it was a friendly, but it would still be difficult to know for whom to cheer.

Claudio Cesare Prandelli, the Italian coach, said he was about to ask the pope if he would attend the match, but Pope Francis anticipated the question and told him that the Vatican security already considers him “undisciplined,” leaving the impression that it would be asking too much to have them arrange a trip to Rome’s Olympic Stadium.

In a brief speech to the players, coaches and referees, Pope Francis encouraged everyone involved with professional soccer to maintain the spirit and passion of it being a game, a team sport.

“Even if the team wins” the game, he said, without beauty, graciousness and team work, both the team and the fans lose.

“Before being champions, you are men, human beings with your talents and your defects, heart and ideas, aspirations and problems,” Pope Francis said. “Even if you are stars, remain men both in your sport and in your life.”

He asked the players to take responsibility for the fact that for millions of people, young and old, they are heroes and role models.

“Be aware of this and set an example of loyalty, respect and altruism,” he said. “I have confidence in all the good you can do among the young.”

The pope, who follows soccer, knows that in Europe the game has been plagued by incidents of players and fans making racist comments about players from Africa. He told the players they must be models of inclusion, working to “permanently eliminate the danger of discrimination.”

When teams are committed to good sportsmanship, he said, everyone in the stadium grows, “violence disappears” and “you’ll start seeing families in the stands again.” 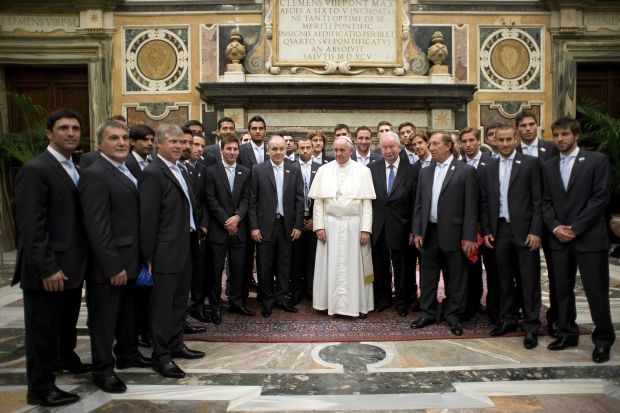 Pope Francis also asked the players to pray for him, “so that I too, on the ‘field’ where God has put me, can play an honest and courageous game for the good of all.”

Speaking to reporters after their audience with the pope, Messi — who will not play in the Italy-Argentina match because of an injury — said the best way for the players to respond to what the pope said was to give fans a clean and exciting game, and to live upright lives.

“Without a doubt, today was one of the most special days of my life,” he said. “We have to excel on and off the field.”

Buffon, who gave the pope a ball signed by all the Italian players, was asked if he thought meeting the pope might spur the miracle needed to ensure that Italy and Argentina make it to the World Cup finals.

“Our job is to work hard to make sure we’re in the finals,” he said. “If Pope Francis does miracles, I think they’d be for more important things.”

Buffon said the pope asking for the players’ prayers was another sign of his “humility and humanity.”

“With a pope like this, it’s easier to be better,” he said. “He shows us the way, he warms hearts, he moves people’s souls” in a way that all the good they’ve talked about doing they would actually start trying to live.

Julio Humberto Grondona, president of the Argentine soccer association, asked the pope to bless Argentine soccer “so that the stadiums would be like they were when you first experienced the emotion of being a fan.”

The matches, he said, should be a time for family enjoyment “in peace, with respect and fraternity.”

Grondona said the Argentine team is “legitimately proud” to be able to say that the ministry and example of faith, simplicity and love of the Lord they received from the pope is the same “you conveyed to us as Father Jorge and Archbishop Bergoglio” of Buenos Aires.

NEXT: Pope asks people to consider what they desire most