Pope asks people to consider what they desire most 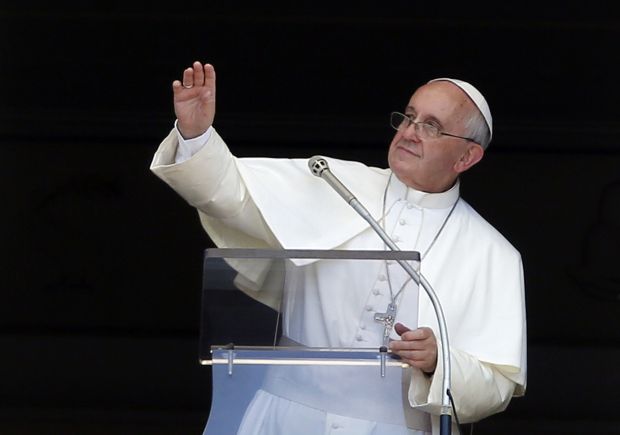 Pope Francis waves after leading the Angelus from the window of his studio overlooking St. Peter's Square at the Vatican Aug. 4. (CNS photo/Stefano Rellandini, Reuters)

VATICAN CITY (CNS) — Yearning and loving give people the strength to move forward and overcome obstacles, but Christians must ask themselves what really is their hearts’ desire, Pope Francis said.

“All of us have a desire,” the pope said Aug. 11 during his midday Angelus address. “Pity the person who doesn’t have a desire. Desire moves us forward, toward the horizon, and for us Christians that horizon is an encounter with Jesus, who is our life, our joy, our happiness.”

Addressing thousands of pilgrims in St. Peter’s Square, the pope asked them to think about what Jesus said to his disciples in the Gospel of Luke: “Where your treasure is, there also will your heart be.”

“Do you have a heart that desires or a closed heart, a sleeping heart, an anesthetized heart?” the pope asked. “And what, for you, is the most important, most precious thing, that which attracts your heart like a magnet?”

Many people would respond that their family is the most important thing, he said. That’s good, but “what is the force that holds your family together? It’s love, and the one who sows love in our hearts is God.”

Pope Francis told the crowd that God’s love gives meaning to all the daily tasks in a Christian’s life, and it is what helps people face trials.

“To move forward in life with love, with that love that the Lord has sown in our hearts, with the love of God — that is a true treasure,” he said.

After reciting the Angelus with those in the square, Pope Francis told them he also wanted to extend his greetings to “Muslims throughout the world, our brothers and sisters, who have just celebrated the end of the month of Ramadan, which is dedicated in a special way to fasting, prayer and almsgiving.”

Pope Francis had written a message to the world’s Muslims for their celebration of Eid al-Fitr Aug. 7-8, marking the end of the month of fasting.

Echoing the theme of the message, he told the crowd in St. Peter’s Square that he hoped “Christians and Muslims will work together to promote mutual respect,” especially through the way they educate the younger generation.

PREVIOUS: His Holiness, the soccer fan, asks players to be real role models