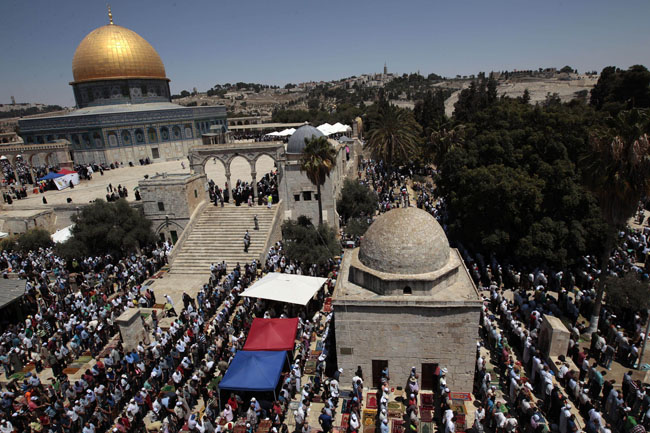 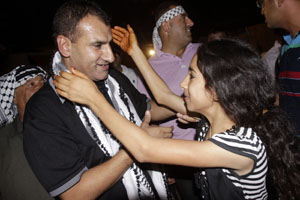 Freed Palestinian prisoner Hosni Sawalha is greeted by his niece upon his arrival in the West Bank village of Azmout near Nablus early Aug. 14. Later that day, Palestinians and Israelis held their first formal peace talks in the Mideast in nearly five years. (CNS photo/Abed Omar Qusini, Reuters)

JERUSALEM (CNS) — Coveted as a spiritual and political capital by both Israelis and Palestinians, the status of the city of Jerusalem has stood out as one of the pivotal topics in their ongoing peace negotiations.

Yet, because of its perceived sensitivity, the topic has always been left for the final status discussions and has yet to be broached directly in the negotiations, which resumed Aug. 14 in Jerusalem.

The sides met for the first time in almost three years at the end of July in Washington in a U.S.-mediated effort to resume the talks. Negotiators are also scheduled to meet in Jericho, West Bank.

“Jerusalem is very critical to the negotiations,” said Bernard Sabella, associate professor of sociology at Bethlehem University and a member of the Palestinian parliament. “U.N. resolutions and even the United States recognize East Jerusalem as occupied territory. We are going to have to find a solution set-up which is acceptable to both parties.

While neither Israelis nor Palestinians will give up on their claim to Jerusalem, he said, they will need to accept the others side’s claim to the city or risk forever being stuck in a no-win situation.

Just three days before the start of the Jerusalem talks Israel, announcing the release of 26 Palestinian political prisoners, also said it would back the construction of nearly 1,200 new apartments in East Jerusalem and the West Bank — almost 800 of them in East Jerusalem. Three years ago, the talks collapsed because of the settlement issue.

The Israel construction in East Jerusalem, which Israelis consider neighborhoods of Jerusalem but which Palestinians view as settlements, makes it impossible to have a clear-cut delineation of Israeli or Palestinian sovereignty in the city, Sabella said.

“We are in a symbiotic relationship,” said Sabella, a Catholic whose parents fled their home in what is now the Jewish West Jerusalem neighborhood of Katamon in 1948 when Israel was established. “We are stuck with each other.”

It is unrealistic, he said, for either side to believe that the other will disappear from the horizon.

Gershon Baskin, co-founder and former co-director of the Israel Palestine Center for Research and Information, a joint Israeli-Palestinian public policy think tank, acknowledged a solution to the Jerusalem issue is difficult. He cited the zigzagging of Israeli and Palestinian “areas” in East Jerusalem and the sacred connection each claims to the city and said reaching an agreement does not involve physical divisions but an agreed-upon intangible division of sovereignty.

“If we find a solution for Jerusalem, everything else will fall into place.”

Baskin noted that Europeans and Canadians have proposed several alternative models for the status of Jerusalem, and he specifically supports the notion of a “scattered sovereignty model.” Such a model divides sovereignty but without physical boundaries and has special parameters for the Old City. This will, he said, require security coordination and a joint fight against extremists and terrorists.

“We can come up with something,” he said, if people work intelligently and move away from the “mystic, historic connection” of who “owns” Jerusalem with the focus on the Old City. “The negotiators on both sides are aware that we need serious compromises. The exclusivity of each narrative makes it so difficult.”

In an ideal situation it should not be difficult to come up with such a model of two neighboring, independent states with a workable, shared sovereignty over Jerusalem, with neither’s claims over the city annulling the other’s claim, said Rabbi David Rosen, international director of interreligious affairs of the American Jewish Committee.

“There can be 100 different children from the same grandfather and still claim loyalty to (him),” he said. “The fact that each feels they have a stronger loyalty or connection doesn’t mean they can’t share it.”

Because the struggle over control of the city has more to do with style rather than substance, he said, it becomes critically important how things are said and that both sides learn how to “express respect for the attachments (to Jerusalem) of the other.”

“Then (they can begin) to negotiate on the practical details of how Palestinians and Israelis can live together in Jerusalem rather than getting hooked on sovereignty issues,” Rabbi Rosen said.

Sabella said one area that poses a problem is the area known as Haram al-Sharif by Muslims, where the al-Aqsa Mosque stands today. Jews call it the Temple Mount, where two biblical Jewish temples once stood.

Rabbi Rosen said that although there are some fringe Jewish extremists who want to exert control over the Temple Mount, the vast majority of rabbinical authorities continue to maintain that Jews are not in a position to rebuild the temple.

“What Jews want is recognition from the Muslim world that this is our holy site, too, and more than that, that it became their holy site because it was our holy site,” he said.

Though skeptical, Sabella said a solution could be found if there was willingness and a “wider vision” on both parts.

“We and Israel project so much holiness and so much history on Jerusalem and so much wanting to keep it (for ourselves) with such a possessive attitude,” he said. “Israel holds onto Jerusalem like a baby does a security blanket — as if it lets go, the whole idea of Israel is gone. And on the Palestinian side it is as if it lets go, it is letting go of one of the most sacred things of our identity. Both of us want Jerusalem to be our security blanket, and we have to figure out how to get these kids to release it and … share.”

Rather than leave the status of Jerusalem for the final status talks, Baskin is a proponent of tackling the issue at the start of negotiations, noting that Jerusalem is a microcosm of the whole conflict.

“If we find a solution for Jerusalem, everything else will fall into place,” he said.

The Vatican continues to believe that the special status of Jerusalem must be guaranteed and internationally recognized in order to ensure the protection of its historic and religious character.

It maintains its position that any agreement on the sovereignty of Jerusalem once reached should then also “ensure freedom of religion and of conscience for all; equality before the law of the three monotheistic religions and their institutions and faithful; respect for the identity and sacred character of the city, its universal religious significance and its cultural heritage; freedom of access to the shrines and worship within them; and respect for the Status Quo,” the long-standing agreement regulating the legal and financial status of key Christian sites and access to them.

NEXT: Text of Egypt’s Coptic Catholic patriarch on recent events in country