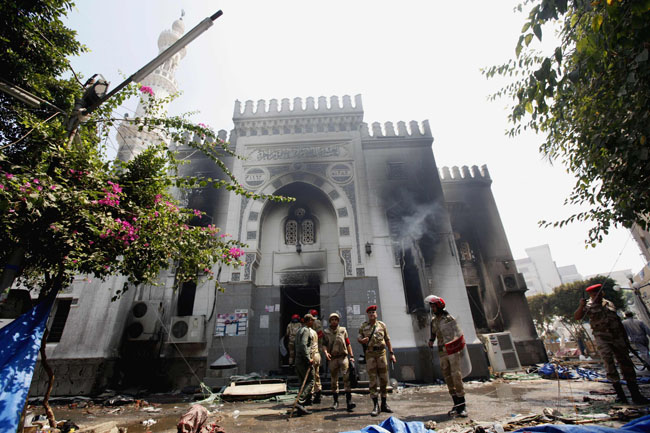 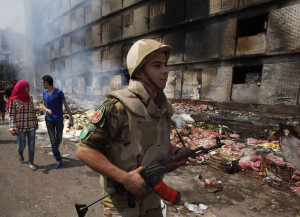 An Egyptian soldier and a couple move near a burned annex building of Rabaa Adawiya mosque after the clearing of a protest camp around the mosque in Cairo Aug. 15. (CNS photo/Amr Abdallah Dalsh, Reuters)

“The military tried to evacuate this sit-in by the Muslim Brotherhood, but they (Brotherhood members) went out and set fire to important sites, including many churches,” said Father Hani Bakhoum Kiroulos, a spokesman for the Catholic Coptic Church.

“This is a problem not just for Christians but also for moderate Muslims. We are facing a group of terrorists who seek to set the whole country ablaze, and we have to cooperate together against this,” he said.

Egypt’s Health Ministry confirmed Aug. 15 that more than 500 protesters and police were killed and more than 3,700 injured when security forces used bulldozers, tear gas and live ammunition to disperse protest camps in Cairo and other cities around the country.

In an Aug. 15 Catholic News Service interview, Father Kiroulos said Western media had falsified the situation in Egypt by portraying the conflict as political when it mostly concerned violent acts by a small minority of Egypt’s 82.5 million inhabitants.

“The security forces are doing their best, but the situation is uneasy. They don’t want to attack or kill fellow-Egyptians, but they have to stop people who come at them with arms,” he said.

As the official death toll rose from clashes Aug. 14 and as the damaged done to Christian churches was being assessed, Pope Francis invoked Mary to bring calm to the country.

In light of the “painful news” coming from Egypt Aug. 15, the feast of the Assumption of Mary, the pope said he was praying for “all the victims and their families, for the injured and those who are suffering.”

“Let us pray together for peace, dialogue and reconciliation in that dear land and throughout the world,” the pope told an estimated 12,000 people who joined him in Castel Gandolfo, south of Rome, for the feast day Mass and recitation of the Angelus prayer.

Pope Francis asked the crowds to join him in asking Mary, queen of peace, to hear his prayers for Egypt.

Coptic Catholic Bishop Kyrillos William of Assiut told Vatican Radio Aug. 15 that the government action and the reaction of the Muslim Brotherhood were not unexpected “because Egypt won’t accept an Islamic state.” The majority, he said, “wants to separate religion from the state.”

Morsi supporters were “shouting slogans against the government, against the police and against the Christians because they are persuaded that all three are the cause of the fall of Morsi’s regime.”

The demonstrators “burned various churches, including one of ours, the one belonging to the Franciscan convent in Assiut,” he said. They climbed the wall and entered the compound, burning the cars that were in the courtyard, setting on fire a souvenir stand, and then setting afire the church “after having profaned it by throwing the tabernacle on the ground.”

They also burned an Orthodox church and a Seventh-day Adventist church in the city, the bishop said.

In el-Qusiya, Bishop William said, the demonstrators started going toward a convent of nuns, “but then some wise people, including Muslims — said to them, ‘What have they done wrong? They’ve been doing good here for 70 years.’ And they chased them off.”

Christian sources said seven Catholic churches were attacked by Muslim extremist mobs in Upper Egypt. They said 25 places of worship belonging to the Coptic Orthodox and Protestant churches, and at least 100 Christian homes and shops, a school and convent were burned.

Father Kiroulos said the church was telling people “to stay calm, avoid violent reactions and wait for this moment to pass.”

He said church leaders hoped to form a joint commission to defend Christian sites and said he had been in touch with police and army officials to explain Catholic needs.

“It’s normal in any country with problems for minorities to suffer,” said the priest. “The attackers want Christians to pay the price for supporting democracy and to play up tensions between Christians and Muslims, calculating we will then go into the streets and do the same to Muslims. But this isn’t our intention.”

“The church did not support a military coup — on the contrary, the military supported the desire of the people, and the church is part of the people,” said the priest, who is secretary to Coptic Catholic Patriarch Ibrahim Isaac Sedrak.

“As Egyptian Coptic Catholics, we aren’t asking for help or protection from outside the country, only from our own government and military. This is our right — and it’s the duty of the authorities, who are doing their best.”