Pope, Jordanian king say dialogue is only hope for peace in Syria 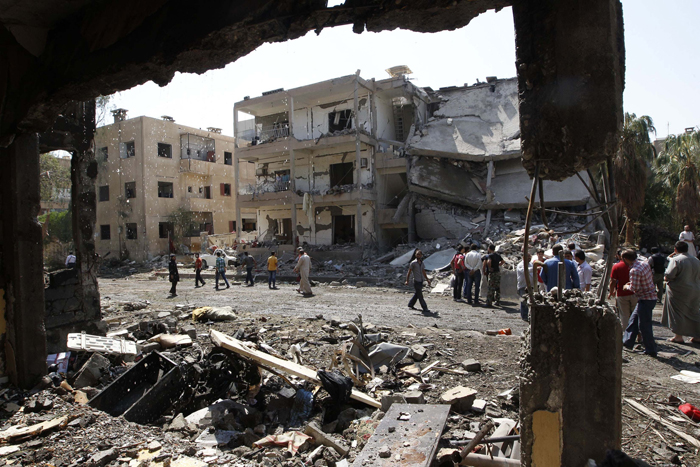 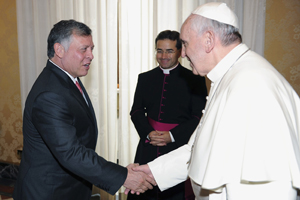 VATICAN CITY (CNS) — Dialogue and negotiations are “the only option for putting an end to the conflict and violence” in Syria, said Pope Francis and Jordan’s King Abdullah II.

As Western leaders expressed strong convictions that the Syrian government carried out a chemical weapons attack against its own citizens and vowed to take action, Pope Francis met at the Vatican Aug. 29 with King Abdullah and Queen Rania.

Jordan borders Syria and hosts hundreds of thousands of Syrian refugees who have fled the fighting that began in March 2011 in an attempt to oust President Bashar Assad.

The king and queen’s meeting with Pope Francis, who technically was still on vacation, was arranged hastily after tensions grew in the Middle East over the reported atrocities in Syria and the unrest in Egypt.

In a statement issued after the meeting, the Vatican said that the pope and king “reaffirmed that the path of dialogue and negotiation is the only option for putting an end to the conflict and violence that each day cause the loss of many human lives, especially among the unarmed population.”

Pope Francis, with an interpreter, spent 20 minutes speaking alone with King Abdullah and Queen Rania before meeting the seven members of the Jordanian delegation. The king and three aides then held a working meeting with Cardinal Tarcisio Bertone, Vatican secretary of state, and Archbishop Dominique Mamberti, secretary for relations with states.

When the king arrived, Pope Francis greeted him in English, saying, “Welcome, Your Majesty.”

While reporters were present before the private meeting began, King Abdullah told the pope, “I have tremendous respect for what you are doing and for what the Catholic Church does.”

The Vatican statement said that during the meetings with the pope and with officials of the Vatican Secretariat of State, the two sides also discussed the problem of stability throughout the Middle East, Israeli-Palestinian relations and the question of the status of Jerusalem, a city sacred to Christians, Muslims and Jews.

The Vatican, the statement said, also expressed appreciation for the king’s commitment to promoting interreligious dialogue and his decision to convoke a conference in September about the challenges facing Christians in the Middle East.

Although the statement indicated a broad range of topics were touched upon, the meeting drew international attention because of the situation in Syria.

Speaking Aug. 28 on the PBS “NewsHour” program, U.S. President Barack Obama said he was convinced the Syrian government carried out chemical weapons attacks in late August; the government had blamed rebels, but Obama said, “We do not believe that, given the delivery systems — using rockets — that the opposition could have carried out these attacks.”

If Assad’s government is responsible, he said, “then there needs to be international consequences.”

The British government asked the U.N. Security Council Aug. 28 to consider authorizing military action against the Syrian government, but Russia objected and no resolution was passed. A team of U.N. weapons inspectors is still investigating the site of the alleged chemical weapons attack.

Archbishop Maroun Lahham, patriarchal vicar for Jordan in the Latin Patriarchate of Jerusalem, told Vatican Radio Aug. 29 the meeting of Pope Francis and King Abdullah was an opportunity for both of them to discuss ways to encourage peace in Syria “in the midst of all these threats we are hearing. With what is happening, Jordan — although it is a small country — can play an important role for peace in Syria.”

“We hope the world’s ‘bigs’ make peace instead of war and find a peaceful solution,” the archbishop said.

Archbishop Lahham said it would be difficult to find anyone in the Middle East who would believe that the United States and members of the European Union would use military force to defend the weak.

“No one believes that!” he said. “Everyone looks after their own political and economic interests.”

“We don’t want this desire for war applied in Syria,” he said. “We hope that the voice of reason — and for us, the voice of faith — prevails and that a political solution to the Syrian crisis will be found.”

In a statement published Aug. 29 on the patriarchate’s website, Latin Patriarch Fouad Twal pleaded with the United States and its allies to be cautious and think again before taking any military action.

“Our friends in the West and the United States have not been attacked by Syria,” he said. “With what legitimacy do they dare attack a country? Who appointed them as ‘policemen of democracy’ in the Middle East?”

“Why declare war when U.N. experts have not yet delivered the definitive findings on the chemical nature of the attack and the formal identity of its agents?” the patriarch asked. “We witness here a logic reminiscent of the Iraq war preparation in 2003. Do not repeat the ‘comedy’ of weapons of mass destruction in Iraq when there were none.”

NEXT: Reverting to tradition, pope names veteran diplomat as Vatican’s No. 2