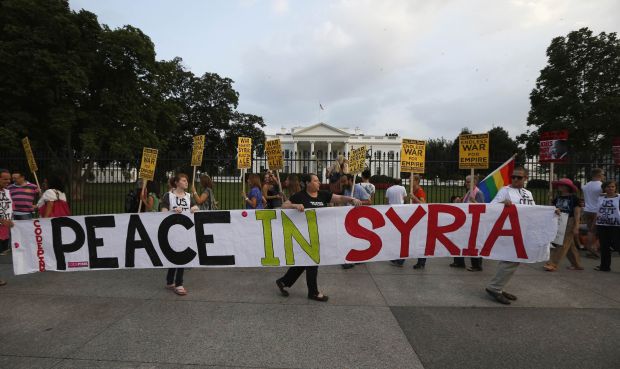 Protesters carry a banner during a rally outside the White House in Washington Aug. 29. (CNS photo/Jason Reed)

WASHINGTON (CNS) — As speculation mounted about Western air strikes on Syria, a committee of U.S. bishops called for a political solution, and Catholic leaders in Europe warned military intervention could lead to an escalation of hostilities.

In a letter to U.S. Secretary of State John Kerry, the chairman of the bishops’ Committee on International Justice and Peace reiterated what Pope Francis and Jordan’s King Abdullah II said Aug. 29, that “the path of dialogue and negotiation between all components of Syrian society, with the support of the international community, is the only option” to end the conflict in Syria.

(See related story on the meeting of the pope with King Abdullah.)

The committee reiterated its long-standing position that “the Syrian people urgently need a political solution that ends the fighting and creates a future … that respects religious rights and religious freedom.”

The letter, signed by the committee chairman, Bishop Richard E. Pates of Des Moines, Iowa, called on the U.S. to work with other governments to pursue negotiations and a cease-fire.

In a column in Austria’s Heute daily, Vienna Cardinal Christoph Schonborn said that “taking up arms can only be a last resort.”

“Were previous weapons programs successful in this region, and did the wars in Iraq and Afghanistan bring peace? What good can bombs do in a country already bleeding from a thousand wounds?” he asked.

The president of the German bishops’ conference also criticized plans for the strikes and said the U.N.-backed International Criminal Court should be allowed to investigate an Aug. 21 chemical weapons attack in Damascus, Syria. 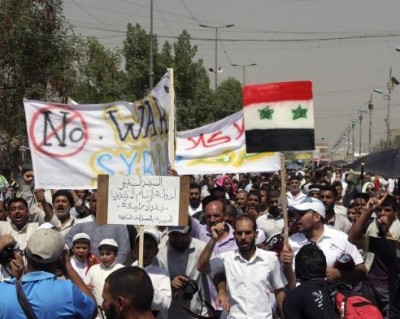 Iraqis in Baghdad demonstrate Aug. 30 against the possibility of a U.S. military strike against the Syrian government. (CNS photo/Kareem Raheem, Reuters)

The head of the German bishops’ commission for international church affairs, Archbishop Ludwig Schick of Bamberg, told the Catholic news agency KNA Aug. 28 an armed intervention could not be justified in Catholic teaching, which required “total certainty of the confirmed damage,” as well as “serious chance of success” and a capacity to avoid “worse damage than that to be eliminated.”

U.S. President Barack Obama said he was convinced the Syrian government carried out the attack, but Syrian President Bashar Assad’s government blamed rebels who have been fighting the government since 2011. U.N. weapons inspectors were supposed to report on the situation to U.N. Secretary-General Ban Ki-moon Aug. 31.

“These are weapons of mass destruction, whose use is outlawed by international law — if the crime by Damascus remains unanswered, then an important component of international law will come under pressure, with potentially devastating consequences for international security,” Archbishop Robert Zollitsch, German bishops’ president, said Aug. 28.

He added that “the goal of military action must be defined, and it has to be asked whether a military strike might not lead to an unintended escalation of hostilities.”

The British Parliament voted against involvement in strikes Aug. 29.

However, French President Francois Hollande said the vote had not altered his country’s resolve to take action, while U.S. Defense Secretary Chuck Hagel said Washington would continue seeking a coalition for possible strikes. 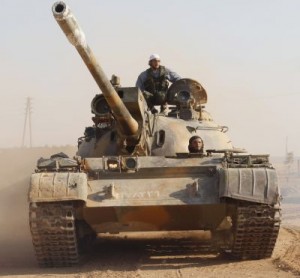 Meanwhile, Metropolitan Hilarion of Volokolamsk, head of ecumenical relations for the Russian Orthodox Church, said, more victims would be “sacrificed on the altar of an imagined democracy” if strikes took place and Syria’s Christians would suffer from “radical extremist forces taking power with U.S. help.”

Poised to act without United Nations approval, he said, the United States “wishes to decide the fate of a whole country with millions of inhabitants.”

Russia is an ally of Assad and has been vigorously opposing outside intervention in the Syria conflict.

By Aug. 30, Catholic bishops’ conferences in France and Britain had not issued statements on the projected intervention.

However, the head of the Anglican Communion, Archbishop Justin Welby of Canterbury, spoke against strikes in the Parliament debate. Earlier, he told the London-based Daily Telegraph he believed there was a “range of options between passivity and total regime change” in Syria.

The Conference of European Churches, which represents more than a hundred non-Catholic churches, said Aug. 28 the use of chemical weapons was a “severe and alarming escalation.”

“We pray that any decision taken will primarily consider the good of the Syrian people and not the exigencies of politics,” it said.

More than 100,000 people are estimated to have died in Syria’s civil war, and 1.7 million have been made homeless.

Contributing to this story was Jonathan Luxmoore in Warsaw, Poland.

PREVIOUS: Many of Egypt’s Christians think U.S. has aligned with the wrong side

NEXT: Pope, Jordanian king say dialogue is only hope for peace in Syria