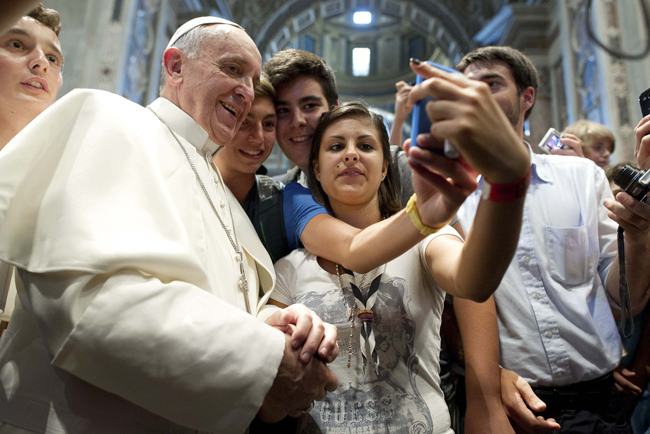 “In life, there will always be people who will make you offers to slow or impede you on your way. Please, go against the current. Be courageous,” he said.

He also asked for prayers for his ministry “because this work is unhealthy, it’s not good for you,” he said with a laugh.

The pope made his comments during a meeting in St. Peter’s Basilica Aug. 28 with some 500 young people from the northern Italian diocese of Piacenza-Bobbio. They were in Rome as part of a Year of Faith pilgrimage with their bishop.

In unscripted remarks, the pope said he loved being with young people because they always carry and share the joy and hope in their hearts.

However, if a young person shows similar pessimism, “I send him to a psychiatrist” because it’s incomprehensible when a young person doesn’t want to conquer the world, “do something great and bet on big, great ideals for the future.”

“You are the makers, the craftsmen of the future,” he said.

Young people need to follow and build on the desire they carry in their hearts: their love of and quest for beauty, goodness and truth, he said.

Pope Francis cautioned them against being too lazy or sad and melancholy.

“This is the challenge, your challenge,” because a sad or lazy young person “is an awful thing,” he said, and it will distort or take away the beauty, goodness and truth that person should be looking for.

He urged his audience to go out and “make noise” because “where there are young people there must be noise.”

Be courageous, he said, and when people say “‘have a little alcohol, take a bit of drugs.’ No. Go against this civilization that is causing us so much harm.”

Going against the current, he said, means making noise with the virtues of beauty, goodness and truth.

PREVIOUS: Romanian priest who died in communist prison to be beatified