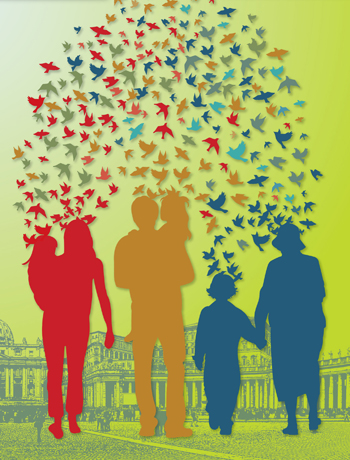 This is a graphic promoting the Year of Faith international pilgrimage of families Oct. 26-27. (CNS)

VATICAN CITY (CNS) — As part of the Year of Faith, the Vatican wants to celebrate bonds that last a lifetime.

The international pilgrimage of families Oct. 26-27 is being planned as a celebration and not a protest against any policy or trend, said Archbishop Vincenzo Paglia, president of the Pontifical Council for the Family.

“The time has come to set aside conflicts,” he said, and “hit the streets” simply with the joy and happiness of being part of a loving family.

The Vatican is not pretending that the institution of marriage and the family aren’t under attack in many societies, he said, but “it’s time not for condemnation, but to extend a hand. It’s time for a warm friendship to help the sad, raise up the weak and console those who are hurting.”

The archbishop and his staff are hoping the pilgrimage will be “a beautiful celebration of parents and children, grandchildren and grandparents and families with other families,” he said.

The central message will be that “happiness does not lie in going it alone,” the archbishop said.

In the run-up to the event, the Pontifical Council for the Family is seeking help from the younger generation: It is collecting children’s drawings of their families as a gift to the pope; encouraging teenagers to post photographs illustrating “living life to the fullest” on the council’s Facebook page; and accepting audition tapes or videos from young adults 18-32 who want to sing or dance at the pilgrimage gathering spot in Rome Oct. 26.

The rules and instructions for submissions from all three age groups are found on the council’s website: www.family.va.

For the 68-year-old Archbishop Paglia, the presence of grandparents at the pilgrimage will be particularly important because, as Pope Francis has emphasized on several occasions recently, modern culture seems to see some human lives — particularly the lives of the elderly and the unborn — as “disposable.”

“I want to help people rediscover the positive force of bonds that last from one generation to the next,” the archbishop said. “It’s not an accident that Pope Francis continues to emphasize the importance of keeping intact the bonds between the beginning of life and the end of life. After all, a tree without roots is a tree without leaves and without fruit; it’s just a trunk and that’s sad to see.”

Highlighting the central role of the family in the life of an individual and of society by promoting a lifelong bond between one man and one woman and insisting on the importance of strengthening relations among generations are, he said, responses to “a deep wound” many people carry, the wound of “a the lack of love.”

“Despite the fact that one sees a growing desire to love and be loved, in reality it is increasingly rare. This is a wound that cuts deep and marks not just individual lives, but societal life as well,” he said.

For Archbishop Paglia, long involved in the Sant’Egidio Community’s efforts to promote peace and solidarity, the lack of love and of commitment to the good of others is at the root of wars, abortion, infanticide and the abandonment of the elderly and the weak.

At a time when there seems to be a “mad dash toward individualism and satisfying oneself,” he said, “it is necessary to demonstrate that the ‘we’ of a family is not only possible, but beautiful.”

Archbishop Paglia said he hopes tens of thousands of families show up — grandparents and parents with kids. All of them are equally welcome and show “the extraordinary ordinariness of Catholic family life.”

Holding the pilgrimage as part of the Year of Faith is not an attempt by the Vatican to claim that only Catholics have real families, Archbishop Paglia said, “but I see a special responsibility on the part of Christians to live well the grace of marriage and family life in order to help everyone in the world recognize how beautiful it is.”

The archbishop hopes many families feel like he does and come to Rome to show it; “I don’t want to be one of those who stands on the sidelines mourning the destruction of the family and the fracturing of society. As a Christian, I will continue to stand up and proclaim the beauty of being a community, starting with the family.”

NEXT: Many of Egypt’s Christians think U.S. has aligned with the wrong side