Pope, with fellow Jesuits, prays for ‘grace of shame,’ humility 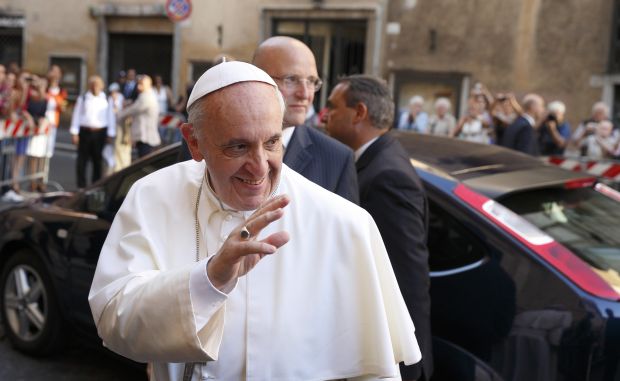 Pope Francis greets the crowd as he arrives to celebrate a private Mass at the Church of the Gesu in Rome July 31. (CNS photo/Paul Haring)

ROME (CNS) — Celebrating the feast of St. Ignatius with more than 200 of his Jesuit confreres, Pope Francis prayed that he and all of them would receive “the grace of shame” for their failures and the humility to recognize that whatever good they accomplish is really done by the Lord.

Jesus told his disciples never to be ashamed of following him, but Jesuits are taught to look upon the crucifix and “feel that very human and very noble sentiment which is shame for not measuring up,” the pope said July 31 during his homily at the Mass in Rome’s Church of the Gesu, where St. Ignatius is buried.

In his spirituality and spiritual tradition, he said, the pope sees himself as a “son of St. Ignatius” and feels “very close to the Society of Jesus.”

For the Jesuits, Father Lombardi said, the pope is a confrere, but “we know the pope is the pope.”

In his homily, Pope Francis prayed that Mary would “help us experience shame for our inadequacy before the treasure that has been entrusted to us, so that we would live with humility before God.”

The pope also prayed for “our brother in Syria,” an obvious reference to Jesuit Father Paolo Dall’Oglio, who was expelled from Syria in June 2012 after intensifying his public calls for democratic change in the country. He reportedly returned to Syria occasionally.

Jesuit and other church officials and friends of Father Dall’Oglio said they had been unable to reach him by phone, and the Reuters news agency reported that militants with links to al-Qaida kidnapped the priest July 29 while he was walking in the northern Syrian city of al-Raqqah. As of July 31, the Vatican and the Italian foreign ministry said they could not confirm that he had been kidnapped.

The pope’s homily was filled with references to the Spiritual Exercises of St. Ignatius, meditations and instructions for a 30-day retreat that form the basis of Ignatian spirituality.

The exercises, he said, are designed to remind Jesuits that Christ and the church must be at the center of all they do; that they must allow themselves to be conquered by Christ in order to serve; and that they must feel shame in order to be humble before God and other people.

Every Christian and every Jesuit, Pope Francis said, should ask himself regularly “‘Is Christ the center of my life?’ because there is always the temptation to place ourselves at the center.”

And, he said, one cannot serve Christ without being in harmony with and serving the church. “There are no parallel or isolated paths.”

“To serve Christ is to love this concrete church and to serve it with generosity and obedience,” he said.

But most of the pope’s homily focused on humility and recognizing one’s limits, so as to be mindful always of greatness of God’s mercy.

“We look at the wisdom of Christ and our ignorance, at his omnipotence and our weakness, at his justice and our inequity and at his goodness and our badness,” the pope said.

The sense of shame leads to the virtue of humility, he said, and a recognition that each Christian “carries a great treasure in fragile, inadequate, insufficient earthen vessels.”

The 76-year-old pope said he thinks often of what the “twilight of the Jesuit” should be as he faces the end of his life. He described as “two icons of this twilight” St. Francis Xavier, the great Jesuit missionary who died in 1552 awaiting a chance to get to mainland China, and Father Arrupe, who in 1981 suffered a massive stroke, “which began his long and exemplary twilight” that lasted almost 10 years and included seeing Pope John Paul appoint an interim superior of the Jesuits, a move seen by many as a lack of trust in the ability of the Jesuits to govern themselves.

NEXT: Slovenian archbishops resign because of ties to financial collapse