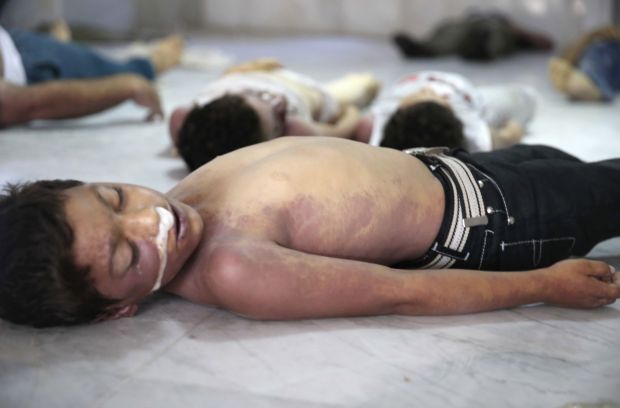 Bodies of children, whom anti-government activists say were killed by a gas attack, are pictured in the eastern suburbs of Damascus, Syria, Aug. 21. (CNS photo/Reuters)

VATICAN CITY (CNS) — The Vatican ambassador to Syria said the international community must help find a political solution to the “serious crisis” continuing in the country.

Speaking to Vatican Radio Aug. 21 after reports of chemical attacks outside Damascus, Archbishop Mario Zenari described the images circulating on the Internet and television “truly shocking.”

The images, which could not be immediately verified, triggered calls for an independent investigation. Syrian opposition forces said more than 1,000 people died in the attacks; other activists put the number in the hundreds. If confirmed, it would be the worst reported use of chemical arms in the civil war that started in March 2011.

Syrian state television denied government forces had used poison gas and said the accusations were intended to distract a team of U.N. chemical weapons experts in Syria. The United Nations scheduled a special meeting that afternoon to discuss the incident.

“People here are fed up” with the war, Archbishop Zenari told Vatican Radio. “They are crying out to the international community to say, ‘Help us so that this war would end immediately. We have had enough; we can’t take it anymore. We can’t continue like this.'”

In late July, U.S. Secretary-General Ban Ki-moon said more than 100,000 people had been killed in the Syrian civil war. More than 1.7 million have fled to neighboring countries.

Within a week in mid-August, authorities said more than 30,000 Syrians crossed the border into northern Iraq.

PREVIOUS: Christian leaders in Jerusalem pray for end of violence in Egypt