As Navy Yard shooting details are sorted out, leaders ask for prayers 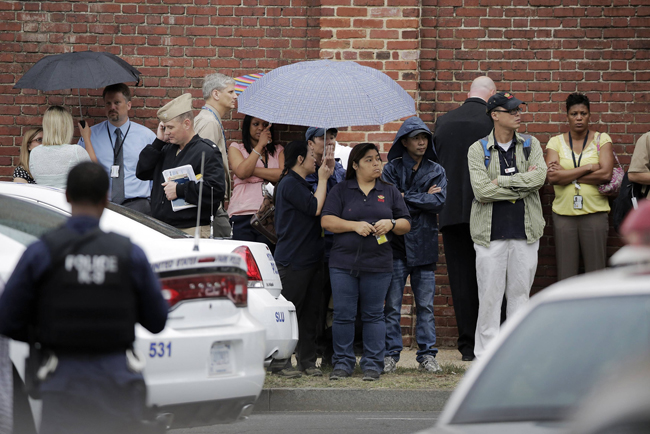 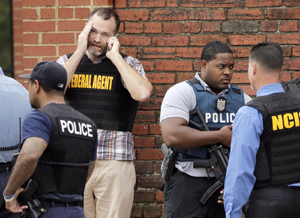 Law enforcement officers gather at scene of a shooting at the Washington Navy Yard after a gunman opened fire inside the base Sept. 16. (CNS photo/Jason Reed, Reuters)

WASHINGTON (CNS) — As military, police and federal investigators searched for a second suspect in the Sept. 16 shootings at the Washington Navy Yard that left at least 12 dead, religious leaders and public officials offered prayers for the victims and their families.

Washington Cardinal Donald W. Wuerl and Archbishop Timothy P. Broglio, who heads the Washington-based Archdiocese for the Military Services, both issued brief statements offering prayers for the victims and their families.

Archbishop Broglio said the “terrible loss of life” shocked and saddened him, particularly as it occurred at a familiar place where he has often visited and celebrated the Eucharist.

“Somehow we must restore the notion of respect for life into the fabric of the nation,” he said in a statement. “When the uniqueness of the human person created in the image and likeness of God is universally recognized, the possibility of a mass shooting is more remote.”

Washington’s police chief and mayor and others in law enforcement told reporters for various news organizations that 12 people were dead, including one man believed to be one of perhaps two shooters in the attack that unfolded shortly before 8:30 a.m. (Eastern time) in one of several large buildings at the Navy facility.

The Associated Press said law enforcement officers identified the dead shooter as Aaron Alexis, a 34-year-old from Texas. It wasn’t clear how Alexis died. Late in the afternoon, the search was continuing for a second man thought to have been involved.

At least three other people were injured, including a police officer. Some witnesses told of encountering a gunman in a hallway; others described someone shooting from an upper-level overlook area into a cafeteria below.

Cardinal Wuerl in his statement offered his prayers for the victims, their families and friends, as well as for the emergency responders on the scene.

He noted that “while many facts are still unknown, our most powerful tool right now is prayer,” adding that the church always calls people to prayer, particularly at times of crisis. “It is what we do best because it is what the Lord asks us to do.”

As he opened a news conference on recovery from the banking crisis, President Barack Obama also extended his prayers and observed that the attack targeted military and civilian personnel at a military installation.

“These are men and women who were going to work, doing their job, protecting all of us,” he said. “They’re patriots, and they know the dangers of serving abroad — but today, they faced unimaginable violence that they wouldn’t have expected here at home.”

He particularly offered his gratitude to the Navy and law enforcement authorities and to the doctors who responded “with skill and bravery.”

“As this investigation moves forward, we will do everything in our power to make sure whoever carried out this cowardly act is held responsible,” Obama said.

Among the religious entities offering prayers, the Washington National Cathedral, administered by the Episcopal Church, announced that its noon Eucharist service and the choral evensong service would include special prayers for victims, responders and the Navy community.

The cathedral’s dean, the Rev. Gary Hall, in a statement offered the cathedral’s space and its ministries “to all who seek consolation and refuge from this loss.”

NEXT: Retired archbishop is in critical but stable condition after stroke