Retired archbishop is in critical but stable condition after stroke 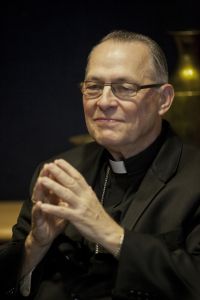 Retired Seattle Archbishop Alex J. Brunett suffered a stroke Sept. 12 and is in critical but stable condition in the intensive care unit at Overlake Hospital in Bellevue, Wash. He is pictured in a 2010 photo. (CNS photo/Mike Penney)

Archdiocesan spokesman Greg Magnoni said Sept. 16 that following his stroke, surgeons successfully operated on the archbishop to remove a blood clot and stop some bleeding on the brain. Following surgery, he was able to respond to voice commands, Magnoni said.

Seattle Archbishop J. Peter Sartain, who succeeded Archbishop Brunett as the spiritual leader of nearly 1 million Catholics in western Washington, was on hand prior to the surgery and administered the anointing of the sick.

Magnoni said the archbishop was expected to remain in intensive care for several days and was not yet able to receive visitors, but the prognosis for a full recovery was good.

Archbishop Brunett headed the Seattle Archdiocese from 1997 until he retired in 2010 at age 76. Archbishop Sartain was installed in December 2010.

A Detroit native, Archbishop Brunett studied at Sacred Heart Seminary in Detroit, the Pontifical Gregorian University in Rome, the University of Detroit and Marquette University in Milwaukee. He was ordained a priest for the Detroit Archdiocese in 1958.

When he was appointed the archbishop of Seattle, he had headed the Diocese of Helena, Mont., since 1994.

In September 2012, Pope Benedict XVI named the retired prelate to be apostolic administrator of the Diocese of Oakland, Calif. He served in that role from October 2012 until May of this year, when Bishop Michael C. Barber was ordained and installed to head the diocese, succeeding Archbishop Salvatore J. Cordileone, now head of the San Francisco Archdiocese.

PREVIOUS: As Navy Yard shooting details are sorted out, leaders ask for prayers

NEXT: Bishop tells House any cut in food aid has ‘human, moral consequences’