Dominican official to investigate claims of sexual abuse against nuncio 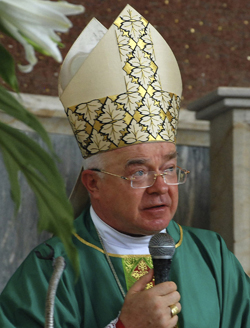 Archbishop Jozef Wesolowski, Vatican ambassador to the Dominican Republic from 2008 until Aug. 21, is pictured celebrating Mass in Santo Domingo in 2009. The Dominican Republic’s top prosecutor said Sept. 4 that he plans to investigate claims of sexual abuse allegedly committed by the archbishop. (CNS photo/Luis Gomez, Diario Libre via Reuters)

Archbishop Jozef Wesolowski, appointed as nuncio in 2008, was removed from the post Aug. 21. A Dominican bishop confirmed in early September that the dismissal was due to the sexual abuse scandal unfolding in the Caribbean country.

In early September, Dominican church leaders distanced themselves from Archbishop Wesolowski, with the cardinal and secretaries general urging the justice system to investigate.

Days after Archbishop Wesolowski’s removal, a television news program aired allegations that he had paid for sex with minors and was connected to a Polish priest accused of sexually assaulting at least 14 underage boys.

The program, Nuria, claimed Archbishop Wesolowski regularly visited Santo Domingo’s historic center, where he allegedly drank alcohol and paid for sex with underage boys in an abandoned monument nearby.

Attorney General Francisco Dominguez Brito said he plans to open an investigation, although it was unclear if he had legal jurisdiction over the case since it involves a diplomatic representative.

These are “serious allegations which involve children and adolescents who appear to have been abused, violating both their physical and psychological integrity,” Dominguez said in a statement. “I can ensure that the prosecution is not going to cease.”

Dominguez said prosecutors are already investigating the priest, Father Alberto Gil Nojache, and have interviewed two of the alleged victims. Father Gil was suspended from active ministry in May.

Neither Archbishop Wesolowski nor Father Gil could be reached for comment.

Dominguez’s announcement followed news that the Vatican had previously opened its own investigation into the matter.

Archbishop Wesolowski arrived in the country in January 2008 and also served as apostolic delegate to neighboring Puerto Rico. He drew praise from Cardinal Nicolas Lopez Rodriguez of Santo Domingo, who called him a “great friend and promoter of peace” as recently as Aug. 27.

Cardinal Lopez released a statement Sept. 5 in which he asked for forgiveness from the victims and their families.

“With humility, we recognize that we, the sons and daughters of the Catholic Church, are in the midst of a situation that concerns and embarrasses us,” he said.

Cardinal Lopez called for the Dominican justice system to act “firmly and clearly. … Anyone who has done wrong has to face the consequences of their actions.”

His statement echoed the call for an investigation made by Msgr. Agripino Nunez Collado, rector of Mother and Teacher Pontifical Catholic University in Santiago.

“When there are these types of situations, justice must be done,” Msgr. Nunez told members of the press. “A person can have his weaknesses … but these abuses, with minors, with boys, this is unforgiveable.”