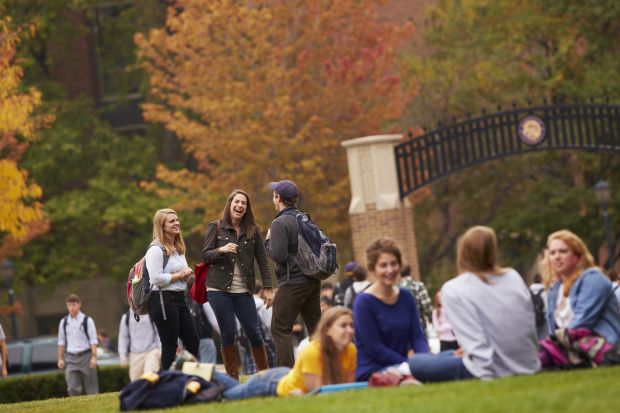 Students chat on the campus of Jesuit-run Marquette University in 2012 in Milwaukee. A plan to reduce student debt, announced by President Barack Obama Aug. 22, aims to rank colleges by access, affordability, graduation rates and earnings and link student aid to these ratings. (CNS photo/courtesy Marquette University)

WASHINGTON (CNS) — This summer — when college campuses were virtually empty — the subject of out-of-control college loans was a hot topic.

Now that students are back in school, the price tag on their loans — set to greet many of them when they graduate — looms larger than their dorm room bunk beds and is getting close scrutiny by students, parents, college leaders and government officials.

In an attempt to reel this in, members of Congress went back and forth on the issue this summer. In early July, lawmakers failed to prevent interest rates on federally subsidized Stafford student loans from doubling to a 6.8 percent interest rate, but then weeks later they turned around and brought the rate back to 3.86 percent.

This agreement — the Bipartisan Student Loan Certainty Act of 2013 — ties the interest rate on student loans to the 10-year U.S. Treasury note and locks in individual rates for the life of each loan. President Barack Obama signed the legislation in early August and then ran further with it announcing a major White House plan to trim college loans.

The plan, announced Aug. 22, aims to rank colleges by access, affordability, graduation rates and earnings and then link student aid to these ratings. Under the plan, students attending higher-ranked colleges or universities could obtain larger Pell Grants and more affordable loans.

The White House calls the proposal a “pay for performance” plan but doesn’t provide the fine print on how it will be carried out. A fact sheet on the proposal says the new ratings — to be available by 2015 and linked to student aid by 2018 — will offer students and their families a “datapalooza” of information that would ultimately pressure colleges to keep costs down.

Much of this information is already available, but the White House aims to put it all in one place and make it easily accessible.

Although the plan was well received in editorial pages, many leaders in the higher education community, Catholic college leaders included, are a bit wary of it and looking at it cautiously.

Michael Galligan-Stierle, president of the Association of Catholic Colleges and Universities, said, in an Aug. 28 statement that the president’s proposals “are complex and require serious study, but we welcome the opportunity to discuss college affordability with the administration.”

Jesuit Father Michael Sheeran, president of the Association of Jesuit Colleges and Universities, said the plan’s goal — to improve quality and cut costs — is laudable, but he hopes the Obama administration consults with higher education leaders in working out the details.

He said he is concerned about the plan’s emphasis on school rankings — a process that he said is often criticized and “still full of holes” — but will now be used to measure or punish schools with aid distribution.

The graduate earnings’ ranking doesn’t sit well with Jesuit schools, said Father Sheeran, noting that these graduates often pursue careers in public service and “know from the beginning that their salaries will be lower.”

He said this ranking will make these lower salaries a “negative discriminator” going against what these schools are about. By simply linking future salaries to student aid, he said the administration “could change the goal of college education without even trying to” because it would put more emphasis on skills training than liberal arts study or public service.

Patricia McGuire, president of Trinity Washington University, and a longtime advocate for lowering college costs and interest rates on college loans, says the White House proposal is not the answer.

She said it will “not help consumers” because the rankings will involve more regulations that will cost colleges money and the costs will be passed on to students.

She also does not believe that a ranking system will put colleges to shame and force them to lower costs. “Big institutions are motivated by markets, not regulations. They pay more attention to attention to Moody’s (credit ratings) than the Department of Education,” she told Catholic News Service.

McGuire similarly takes issue with ranking colleges by graduate earnings, saying the idea “is just wrong” because it “goes against the value of service and justice and undercuts the self-satisfaction and esteem students get from being in college.”

She said the issue of spiraling student loans — those higher than the $26,000 average — are a problem for middle class families who really need to choose colleges they can afford. She said paying for the average student loan — in a 10-year period — is reasonable, especially if the student has a degree.

Instead of relying on government rankings to solve the debt problem, McGuire said colleges should take a close look at their own operating costs.

At Trinity, for example, she said employee salaries are modest and they “don’t have a lot of perks” or big travel budgets. With every expense the university faces, she said school officials determine if it’s really necessary.

And that goes right down to the cookies at faculty meetings.

When professors ask about them, she says if having food trays at meetings means that some student had to pay more tuition, then they just aren’t worth it.

McGuire wishes the bigger schools “would go on diet that way” — trimming their own costs to save students money.

NEXT: Just war in attacking Syria? Some see cloudy, some see clear answers