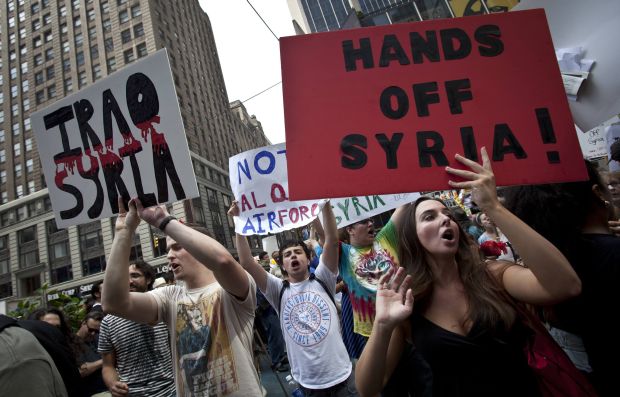 WASHINGTON (CNS) — Even with just war theory as a guide, the answers remain murky to moral and ethical questions about whether a military strike is the appropriate response to what U.S. officials believe was a chemical attack against Syrian civilians, analysts said.

While President Barack Obama, Congress and other world leaders weigh how to respond to the reported chemical weapons attack Aug. 21 that killed as many as 1,400 civilians, the church’s just war teachings on when a military response is appropriate were being raised as a guide to decision-making.

Two Catholic priests, Jesuit Father Richard Ryscavage of Fairfield University in Connecticut, and Father Bryan Massingale, of Marquette University in Wisconsin, each suggested that the just war criteria for military action may well be met in this case, though perhaps not without other approaches being tried before resorting to an attack.

Three other academics who specialize in ethics and international law in dispute resolution each found less to support a military strike by the United States.

“There’s a very strong theory of justice,” that defines the just war teachings, he said. Sometimes the pacifist approach of “‘go for peace,’ is just not possible.”

The relatively recent concept of “responsibility to protect,” which Pope Benedict XVI endorsed in a 2008 address to the U.N. General Assembly, is viewed in Catholic teaching as “a natural extension of the principle of solidarity, the teaching that we are all part of the same human family,” Father Ryscavage said. It means that when failed governments are unable to protect their own people, or the government itself launches large-scale attacks on its population, especially civilians, “the nations of the world have a moral responsibility to intervene to protect the innocent,” he said.

Nevertheless, Father Ryscavage added, the strategy of the Obama administration and others who support a military strike “is not at all clear.” Have diplomatic efforts been exhausted? he asked. Is the goal to prevent future chemical attacks? Or is the idea to symbolically show that “we did something” in response to a chemical attack?

Pope Francis, Christian leaders in Syria, the president of the U.S. Conference of Catholic Bishops and the heads of an assortment of organizations representing religious orders have called for a peaceful solution through dialogue and negotiation. They have argued that military intervention would only further inflame the situation.

Father Massingale, a theology professor whose doctorate is in moral theology, said that first, “we’re asking the wrong questions” in using the just war criteria “as a checklist.” The principles, as outlined in the “Catechism of the Catholic Church,” include:

— Is the damage inflicted by the aggressor lasting, grave and certain?

— Are all other means to ending the aggression impractical or ineffective?

— How likely is success?

— Will the use of military force be proportionate to the actions it aims to address?

Father Massingale said he believes the situation in Syria meets some of the just war conditions, but that instead of using them as a checklist to justify an action, they should be “criteria for discernment.”

He explained that while he has questions about considerations such as the probability of success of a military strike, he also is concerned about “the isolationist movement in the United States; the idea that ‘it’s not our problem’ is a dereliction of moral responsibility.”

Given the gravity of the chemical weapons attack as well as previously documented conventional weapons attacks on civilian populations by the Syrian government, Father Massingale said he would probably come down, “in an ideal world,” on the side of making finely tuned military strikes to “significantly degrade Syria’s possession and use of this kind of weapon.”

But he acknowledged, “there is no risk-free option, no clean-hands solution” to the dilemma facing President Obama and other world leaders.

Mary Ellen O’Connell, a lawyer who is research professor of international dispute resolution at the University of Notre Dame’s Kroc Institute for International Peace Studies, said that as a legal matter, the U.S. has no standing to attack Syria under international law. Lacking the approval of the U.N. Security Council, retaliation or punishment is “not a legitimate military objective,” she said.

She said the recent example of international intervention in a civil war in Libya might on the surface have some similarities, but the U.N. Security Council authorized the Libyan involvement under the argument that outside force could help save civilian lives that were in imminent danger. No such risk has been clearly substantiated in Syria, she said.

Debra Erickson, visiting assistant professor of religious studies at Siena College in New York, agreed that several of the just war criteria seem to be met by the Syria situation, but she said the question of whether there is an international responsibility to protect the Syrian population lacks a clear answer.

“This is not Rwanda, where there was a clear intention, a planned attack to exterminate a people,” she said, adding that in Syria, “both sides are killing civilians.”

Erickson said political questions also complicate the situation, such as what is to be gained for the countries that support the Syrian government, including Russia and Iran, as well what repercussions there might be in the region and why some believe there should be intervention now.

“Saddam Hussein was gassing the Kurds for years” without international involvement, she observed. As horrendous as the chemical attack in Syria was, it involves a much smaller population than did those attacks in Iraq, she said, “so there are some suspect motivations here.”

David Perry, director of the Vann Center for Ethics at Davidson University in North Carolina, has taught courses on ethics and warfare at the U.S. Army War College as well as at Santa Clara University in California and Seattle University, both Jesuit institutions.

He told Catholic News Service that “just cause” exists to intervene militarily in Syria to stop atrocities, but that it’s not clear that anything short of sending in troops will accomplish that.

While the prospect of diplomacy resolving Syria’s problems seems weak, Perry said the possibilities haven’t been exhausted. The U.S. has maintained that Syrian President Bashar Assad must step down, and Assad has made clear he has no intention of doing so.

Perry suggested a path for diplomacy might be to accept that in a negotiated settlement, Assad will be allowed to remain in power of some sort. That might be the opening that enables diplomacy to end the worst of the fighting and put Syria on a path toward peace, he said.

He also questioned whether an attack on Syria would be legal under international law. But he cited a potential precedent for going after Syria in the finding by an independent commission in 1999 that intervention in Kosovo’s civil war by NATO forces was “illegal but legitimate” in protecting Kosovars from the threat of ethnic cleansing.

“Nobody will do this if we don’t,” Perry observed.