Many flood victims have lost all, but ‘still have the Lord,’ says woman 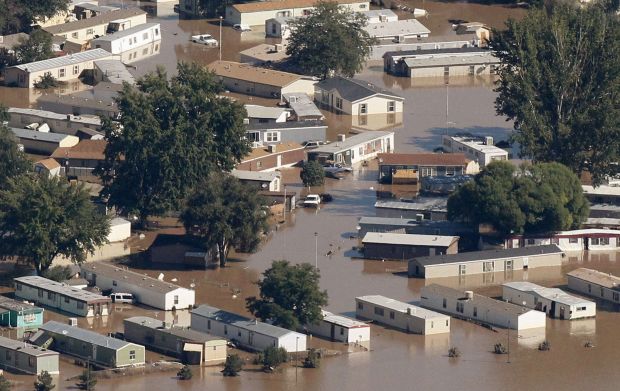 WASHINGTON (CNS) — Mary Jurgensmeier, a member of St. Peter Catholic Church in Greeley, Colo., said she knows people in her community who have lost everything.

“We still have the Lord,” said Jurgensmeier, who was evacuated from her home Sept. 13. “We will never lose him.”

Jurgensmeier is one of thousands of Colorado residents who have been displaced from their homes in the flooding caused by several days of torrential rains that began Sept. 11. She said she and her husband returned to their farm, which is located about three miles east of Greeley.

Jurgensmeier said there was no flood damage to their home, which is located on a knoll.

“We are one of the lucky ones,” she told Catholic News Service in a telephone interview.

Jurgensmeier, however, said there has been damage to agricultural property on their land. She said floodwater is still covering their pasture.

“Our horses can’t get to clean water,” she said. “They’ve been drinking floodwater.”

Jurgensmeier said St. Peter has been working to aid families since the onset of flooding in Colorado. She said her church has gathered clothing for victims.

“They loaned a freezer to a family who lost everything,” Jurgensmeier said. “They have been reaching out on a personal level.”

Father Matthew Hartley of St. Peter said the church is trying to help as many families in the area as they can. He said St. Peter has opened up its food bank. 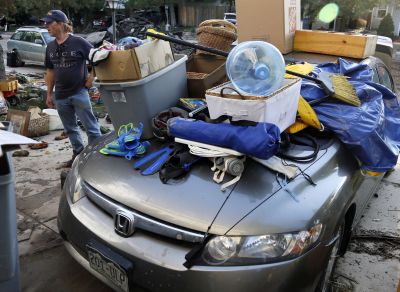 Chris Roberson stands next to his car where possessions were placed on the hood to dry out in Longmont, Colo., Sept. 16. (CNS photo/Rick Wilking, Reuters)

“The big thing is meeting immediate needs,” he said.

Father Hartley said four families at St. Peter have lost their homes because of the flooding. “It’s a very difficult time,” he said.

The priest said many organizations have worked to help victims, including Catholic Charities of Weld County, which is in the Denver Archdiocese.

“The city of Greeley has rallied together as well,” he said. “People have been extremely generous.”

“We’re trying to do tangible things,” Kearns-Hout said. “This will not be resolved in a short time and we will be here for the long run to provide support and show Christ’s love and compassion to those who lost so much.”

Kearns-Hout said one will see devastating sights around Weld County. She said many families have lost everything.

“One individual had just made his last payment on his family’s home the morning of Sept. 13,” Kearns-Hout said. “The flood took his home that afternoon.”

Kearns-Hout said many homes in Weld County have been tagged as uninhabitable because of flood damage. “The greatest need is for families to find a place to rent,” she said. 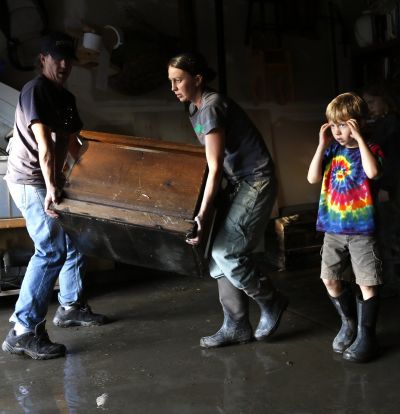 Chris and Shanda Roberson in Longmont, Colo., carry a flood-soaked antique trunk from their garage Sept. 16 as their son, Rowen, looks on. (CNS photo/Rick Wilking, Reuters)

Kearns-Hout said Catholic Charities is a go-to center for those of any faith.

“One of the blessings is that we have collaborative partners,” she said.

Dennis Hughes, operations section chief of the Second Responders Program, said the availability of basic care for flood victims is the top priority. Hughes said the needs of displaced victims include food, shelter and a clean place to live.

Hughes said the Knights’ Second Responders serves a 50-mile area. He said the program was contacted by the Red Cross to help provide food for victims.

Hughes said he and the team cooked hot dogs and set up a continental breakfast at a high school in Commerce City. He said Second Responders initially fed a group of 100-120 people, however they prepared food for 250.

“Other brother Knights from Wyoming and Kansas have come in to assist with mass care and feeding,” Hughes said.

Sullivan, who lives in the Denver metropolitan area, said the flooding was not confined to any one area.

“It’s a dynamic and evolving disaster,” he said.

Sullivan and his district director Jason Godinez said their homes were not damaged by the flooding. Sullivan said Godinez has been working 18 hours a day since the onset of the floods to care for residents of his district.

Sullivan said he also has not slept much in the past few days.

According to a statement issued Sept. 17 by the American Red Cross, thousands of people in Colorado have been forced to evacuate their homes because of flash flooding. The Red Cross was working with the Colorado National Guard and local emergency management chapters to ensure that all in need were being helped. More than 20 response vehicles and six trucks with relief supplies for victims were launched.

NEXT: Military archbishop guides chaplains on ministering to same-sex couples