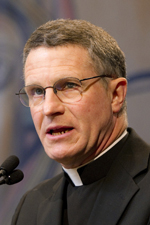 WASHINGTON (CNS) — Archbishop Timothy P. Broglio of the Archdiocese for the Military Services has issued guidelines on ministering to same-sex couples for military chaplains and other priests and deacons who serve Catholics in the military, U.S. Foreign Service personnel and those at Veterans Affairs facilities.

The document, “Renewed Fidelity in Favor of Evangelization,” highlights the need to “reiterate with clarity the teaching of the Catholic Church regarding homosexuality” but also points out that, as St. Paul reminds believers, “it must never be forgotten that the human condition occasions many failings.”

In the statement, released Sept. 18, Archbishop Broglio said he felt obligated to emphasize Catholic teaching in light of “recent changes in interpretations of the laws of the federal government.” He also said he was pleased that Congress renewed conscience-protection language, specifically for chaplains in the Armed Forces.

He said a priest who is asked to counsel non-Catholic couples in a same-sex relationship should direct the couple to a chaplain who is able to assist them. Catholic same-sex couples, he noted, will be “encouraged by the priest to strive to live by the teaching of the Gospel.”

The archbishop said that Catholic chaplains and other priests may participate in retirements, changes of command, and promotion ceremonies of someone in a same-sex relationship, as long as the chaplain is “not required to acknowledge or approve of a ‘spouse’ of the same gender.”

He also pointed out that a priest should not be “placed in a situation where his assistance at a funeral for a Catholic would give the impression that the church approves of same-sex ‘marital’ relationships.”

Archbishop Broglio noted that “anyone who is known to be in a sinful relationship is excluded from ministries in the Catholic community” such as lectors, extraordinary ministers of communion, altar servers, catechists and Catholic council members.

He also pointed out that the Catholic Church must “minister to all regardless of their sexual inclination” but he also stressed the “invitation to conversion cannot be diluted” and “the door to the mercy of Christ” must remain open. Priests and deacons should be guided by the principles of the Catechism of the Catholic Church, he said, and “never forget that it is the sin that is hated and never the sinner.”

The catechism teaches that homosexual people “must be accepted with respect, compassion and sensitivity” and that “every sign of unjust discrimination in their regard should be avoided.” The church upholds the sanctity of traditional marriage, between one man and one woman, and also teaches that any sexual activity outside of marriage is sinful.

The archbishop also said that same-sex couples represent less than half of 1 percent of those in the Armed Forces. “While every individual is important, such a small group cannot be allowed to mandate policy for all,” he added.

He said Catholics who exercise command positions in the military face additional dilemmas as they fulfill their responsibilities to those above and below them in the chain of command.

To address such situations, Archbishop Broglio cited a statement he said the National Catholic Bioethics Center had issued in response to a query from the archdiocese on the matter.

U.S. military commanders, the center said, would “not be engaging in morally illicit cooperation, but rather tolerable remote mediate material cooperation with evil by implementing federal employee benefits” for same-sex couples who are married as per the June 26 Supreme Court ruling in U.S. v. Windsor.

Determining factors include situations where commanders cannot avoid such cooperation without jeopardizing job security for themselves and their family; if there is no “mechanism” to have someone more senior in the chain of command carry out the policies in question; and whether they have made known their objections to being required to participate, as well as attempted “through legal channels to accomplish changes in policy” upholding traditional marriage and family “as based on natural moral law.”

PREVIOUS: Many flood victims have lost all, but ‘still have the Lord,’ says woman

NEXT: Sitcom writer’s road to Catholic Church no laughing matter