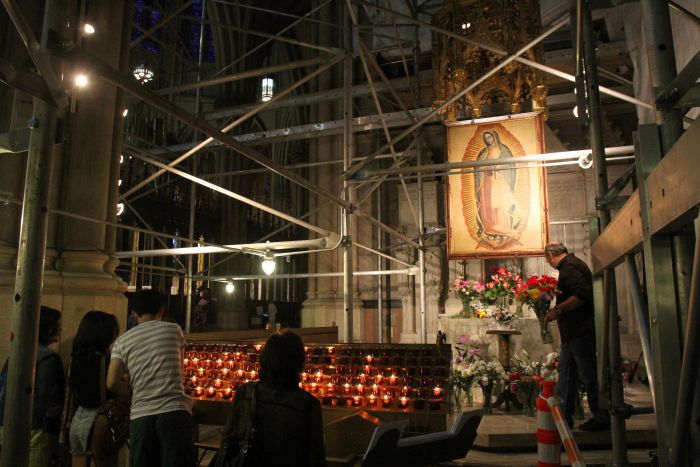 Scaffolding is positioned near an image of Our Lady of Guadalupe inside St. Patrick's Cathedral in New York Aug. 14. (CNS photo/Gregory A. Shemitz)

NEW YORK (CNS) — Tall metal scaffolding not only fills but surrounds New York’s famed St. Patrick’s Cathedral. What looks to the uninitiated like a zealous cleaning job is actually a painstaking $177 million restoration.

If all goes according to plan, worshippers should appreciate how magnificent the iconic church looks when the work is finished without identifying anything that is truly different or out of place.

“By and large, we’re fixing things that most people won’t notice,” said Jeffrey Murphy, a partner in Murphy Burnham and Buttrick Architects, the firm in charge of the restoration. The trustees of St. Patrick’s opted for a conservative approach, where the stone, plaster and glass are cleaned and repaired, not changed and replaced, he told Catholic News Service.

The “very high level” of the work includes thorough research into original materials and drawings to ensure that the outcome reflects both the iconic stature of the building and the not-unlimited budget, Murphy said. “The trustees are sensitive to doing the essential things and not superfluous things,” he said.

But even a gentle approach unnerves some visitors to the 134-year-old landmark.

Msgr. Robert T. Ritchie, cathedral rector, said worshippers initially were upset that tradespeople worked throughout the day, even during Mass. 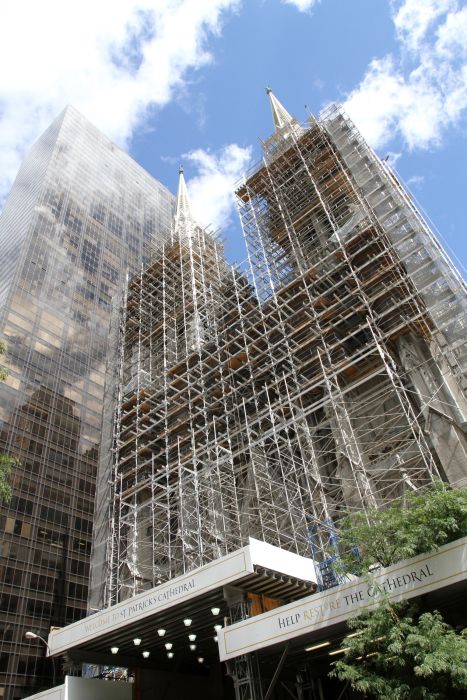 Scaffolding covers the exterior of St. Patrick’s Cathedral in New York Aug. 14. The cathedral is undergoing a $177-million restoration. (CNS photo/Gregory A. Shemitz)

“I had to explain union rules and hours. To stop for all the Masses would have boosted the labor costs 20 percent. We move Masses to the Lady Chapel during work time. People are more amenable now. They still don’t like it, but they understand,” he said.

The essential tasks include cleaning and repointing the marble exterior, which was damaged by the acidic atmosphere of the city and exacerbated by earlier repairs. “Cleaning stops the process of the acid eating into the stone,” Msgr. Ritchie said.

The stained-glass windows were in better shape than the restorers expected. They removed a protective glaze that had oxidized and become opaque. The uncovered windows were dirty but robust. The cleaning will let more natural light into the cathedral, Murphy said.

“The owner of the stained-glass company told me they are doing things here exactly the same way as in the 13th century, except with electricity,” Msgr. Ritchie said.

The renovation will use environmentally sustainable technology to reduce heating and cooling costs by 30 percent, Murphy added. A compact geothermal plant with 10 wells drilled into the Manhattan bedrock is the centerpiece of the “green” effort.

Msgr. Ritchie said the New York City Landmarks Preservation Commission, a powerful municipal body that oversees changes to historic properties, worked closely with the restoration team. The two groups collaborated on plans for the geothermal system during an eight-year period in which the technology improved and the price dropped.

“This is one of the most iconic buildings in the city. The landmarks commission was looking for the best decisions for New York City and for us,” Msgr. Ritchie said. 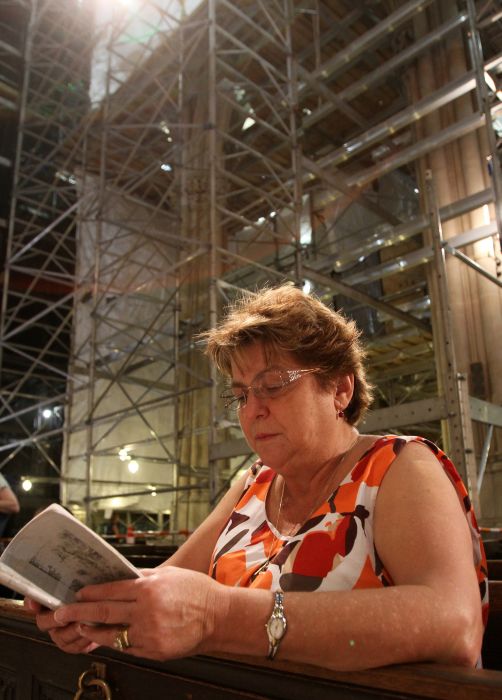 The renovation reached a milestone Aug. 13 and 14, when the two massive bronze front doors of the cathedral were put back into place. Each door weighs more than 9,000 pounds and Msgr. Richie said opening them once required strategic placement of a strong shoulder. Now, they seem to glide.

Gabriel Popian, vice president of G & L Popian Inc., the company commissioned to restore the doors, told CNS his son used a tiny camera “the diameter of a chopstick” connected to nine feet of tubing to perform an endoscopic examination of the doors to check for cracks in the welded internal frame.

Popian said he “restored the doors practically from the inside out” and replaced the hinges and mounting elements with stainless steel so they move with ease.

The panel doors are embellished with statues of saints and Catholic New Yorkers recognized for their holiness. They get a lot of attention and even abuse, Popian said. “They were vandalized with graffiti and painted over with a Benjamin Moore brown faux finish, but we brought them back to their former glory,” he said

Popian’s effort included research to identify, re-sculpt and cast the missing head of the staff held by the statue of St. Patrick himself.

The campaign to fund the restoration has raised more than $70 million, reported Kate Monahan, assistant communications director for the Archdiocese of New York. When he announced the restoration on St. Patrick’s Day 2012, Cardinal Timothy M. Dolan of New York said $45 million had been raised.

Murphy said the first two major phases of the project will be completed by June 2014. Two more phases are envisioned, but will depend on the success of fundraising, Monahan said.