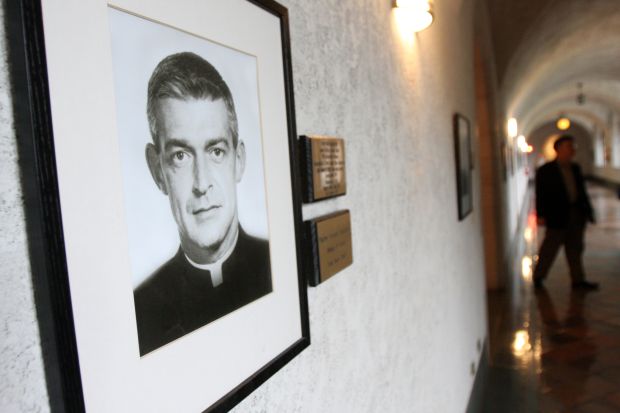 A portrait of Maryknoll Father Vincent R. Capodanno is displayed in the Hall of Martyrs at the Maryknoll Mission Center in Maryknoll, N.Y., April 12. (CNS photo/Gregory A. Shemitz)

WASHINGTON (CNS) — As the sainthood cause for a Vietnam War chaplain gathers momentum, the priest was remembered at a Sept. 4 memorial Mass as a man “completely dedicated to the spiritual care of his Marines.”

Father Vincent Capodanno, who died in Vietnam Sept. 4,1967, was one of the “great priest chaplains,” said Archbishop Timothy P. Broglio of the Archdiocese for the Military Services in his homily at the Mass, celebrated at the Basilica of the National Shrine of the Immaculate Conception in Washington.

“This annual gathering is to pray for him and to recall his pastoral service as a model for chaplains and priests in general,” Archbishop Broglio said. “The cause for his canonization is not for him, but for us. Others should know of his dedication and his desire to serve others. His was a response filled with faith to the Master who laid down his life for the sheep.”

Father Capodanno, a Maryknoll priest and Navy chaplain, died in Operation Swift in the Thang Binh district of the Que Son Valley. He went among the wounded and dying, giving last rites. Wounded in the face and hand, he went to help a wounded corpsman only yards from an enemy machine gun and was killed.

“One way or another, directly or indirectly, we have been touched by the life and ministry of the ‘servant of God,’ Vincent Capodanno,” Archbishop Broglio said.

In his homily, he challenged all given pastoral responsibilities. “That is the constant tension in pastoral ministry: Where do I best use my time and talents, what furthers the mission? It is the mission that is central and not merely my career, or promotion, or whatever,” he said. 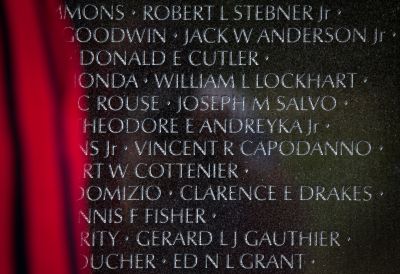 The name of Maryknoll Father Vincent R. Capodanno, a Navy chaplain who was killed while serving with the Marines in Vietnam, is seen on the Vietnam Veterans Memorial in Washington June 26. (CNS photo/Nancy Phelan Wiechec)

“To receive the Lord Jesus means to open my heart with generous love. Anyone, young or old, who meets Jesus is inevitably destined to change and to be led to the service of others.”

To the Marine veterans gathered at the Mass, the archbishop said, “Is that not why you, fellow Marines of Father Capodanno, have joined us tonight? Some of you have journeyed to be here. You cannot forget the shepherd who was there for you.” After the final blessing at Mass, a lone trumpet played “Taps.”

In the book “The Grunt Padre” — Father Capodanno’s nickname — Marine Cpl. Keith Rounseville said Father Capodanno “was jumping over my (fox) hole, all the while exposing himself to enemy machine gun fire to try and give aid to a wounded Marine. Chaplain Capodanno looked and acted cool and calm, as if there wasn’t an enemy in sight. As he reached the wounded Marine, Chaplain Capodanno lay down beside him and gave him aid and verbal encouragement and telling him medical help was on the way.”

Marine Cpl. Ray Harton also remembered how he lay wounded and bleeding from a gunshot wound to his left arm. “As I closed my eyes, someone touched me,” he recounted for the book. “When I opened my eyes, he looked directly at me. It was Father Capodanno. Everything got still: no noise, no firing, no screaming. A peace came over me that is unexplainable to this day. In a quiet, calm voice, he cupped the back of my head and said, ‘Stay quiet, Marine. You will be OK. Someone will be here to help you soon. God is with us all this day.'”

In 2002, Father Capodanno’s canonization cause was officially opened. In 2004, the initial documentation for the cause was submitted to the Vatican’s Congregation for Saints’ Causes. In 2006, a public decree of “servant of God” for Father Capodanno, a native of Staten Island, N.Y., was issued by the military archdiocese.

Recently, the archdiocese established the Capodanno Guild to raise funds and support for the sainthood cause. On Oct. 1, Archbishop Broglio said, there will be a formal opening of the cause to meet the canonical requirements.

PREVIOUS: USCCB weighs in on Syria with letters to Obama, Congress

NEXT: St. Patrick’s Cathedral in midst of meticulous $177 million restoration