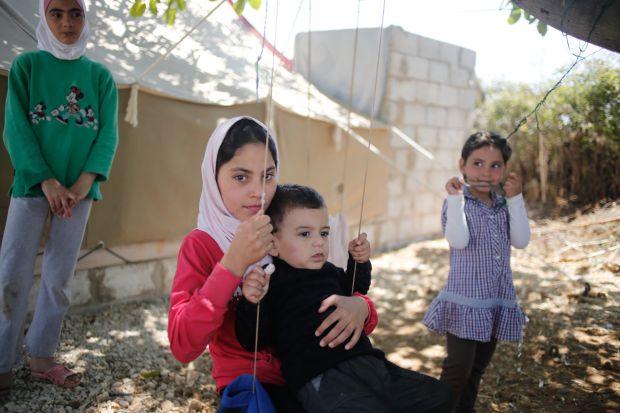 Rou'a, 10, from Daraya, plays on a swing with her cousin Abdullah, 2, at an informal refugee settlement in Talabaya in Lebanon's Bekaa Valley. The camp is home to some 55 families who fled to Lebanon from their homes in Syria. (CNS photo/Sam Tarling, Catholic Relief Services)

WASHINGTON (CNS) — Governments and nongovernmental agencies are struggling to keep up with the needs and pressures created by the displacement of nearly a third of Syria’s population because of the country’s civil war.

Assistance to the refugees and displaced people is coming from around the world, although resources are thinly stretched.

Representatives of several Catholic agencies that are involved at various levels told Catholic News Service that their programs include helping make sure children can go to school and get help dealing with psychological trauma, as well as providing the basics for survival, such as food, water, housing and medicines.

Resettlement agencies, including Migration and Refugee Services of the U.S. Conference of Catholic Bishops, meanwhile, are preparing for the possible need for new permanent homes in other countries for thousands — or maybe hundreds of thousands — of Syrians who may decide they can’t go home.

Witnesses from the State Department and the U.S. Agency for International Development told a House hearing Sept. 19 that almost one-third of Syria’s 22 million people have been displaced by the civil war, including an estimated 2 million who have fled the country — typically referred to as refugees — and about 5 million who have been forced from their homes but remain in Syria — generally called “internally displaced.”

That makes the Syrian displaced population the largest in the world, and it has grown at a dramatic pace, said Anne C. Richard, assistant secretary of state in the Bureau of Population, Refugees and Migration.

She said the number of refugees from Syria climbed from 230,000 a year ago to more than 2 million now. Most have poured across Syria’s borders to Lebanon, Jordan, Turkey and Iraq, which are struggling to provide basic services such as food, water and housing to transient populations that in some towns exceed the number of permanent residents, she said.

For perspective, Richard said, “more people have fled their homes in Syria than fled the genocide and its aftermath in Rwanda or the ethnic cleansing in Bosnia.”

She quoted U.N. High Commissioner for Refugees Antonio Guterres as saying earlier in September that “Syria has become the great tragedy of this century — a disgraceful humanitarian calamity with suffering and displacement unparalleled in recent history.” 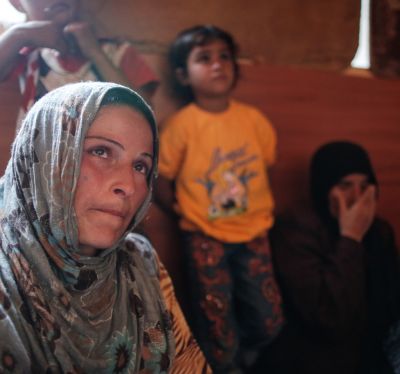 Ferian, 35, from Babr Amr, in Homs, Syria, who fled to Lebanon to escape the conflict which claimed the lives of her three brothers, is pictured in 2012 at an informal refugee camp in Al Four at the foot of the mountains on Lebanon’s eastern border with Syria. (CNS photo/Sam Tarling, Catholic Relief services)

Nancy E. Lindborg, assistant administrator for the Bureau for Democracy, Conflict and Humanitarian Assistance at USAID, told the hearing of the House Foreign Affairs Subcommittee on the Middle East and North Africa that the number of people inside Syria who need some kind of humanitarian help is around 6.8 million, or about the equivalent of the combined populations of Vermont, New Hampshire, Maine, and Connecticut.

The Syrians she encountered mostly fled their homes on a moment’s notice, so they need “everything you and I have used so far this morning,” such as beds, toiletries, hair brushes, food, towels and clothing, Brennan said.

The House hearing witnesses said about 70 percent of the people who fled Syria are not living in formal refugee camps. Instead they crowd into existing towns, taxing infrastructure such as water, sewer and electrical services.

Brennan said she met families where two or three women and their children were crowded into an apartment, “bursting at the seams.” Their husbands were not with them, some having been killed in the war, others having remained behind to protect property.

The border regions “were a sea of women and children,” Brennan said. That image isn’t seen around the world however, because the people living in these communities aren’t comfortable being photographed, whether for cultural reasons or for fear of being identified and that causing problems back home, said Brennan.

She told of one woman who wanted to be sure Brennan understood just how unfamiliar she was with the role of the refugee, dependent upon others for everything. “She told me ‘I don’t want you to think I’m illiterate. I was a professor in Aleppo,” Brennan said.

In the region, CRS, the U.S. church’s overseas relief and development agency, partners with Caritas, the international Catholic aid agency. Given the high level of education of many of the refugees, Brennan said it’s been relatively easy for Caritas to find people among the refugees to teach in the schools they set up, and to run the various programs such as counseling.

Children are the first target for counseling, said Brennan, telling of kids who, when asked to draw pictures of “springtime,” illustrated the skies over blooming flowers with drawings of bombs, for instance.

Mitzi Schroeder, policy director for Jesuit Refugee Service, told CNS that in addition to the same type of work CRS is supporting among refugees, the Jesuit organization is working within Syria, helping get aid to about 355,000 displaced people.

Food distribution, cooking equipment and health supplies are among the materials JRS is helping distribute through local networks. Some of that comes through USAID’s disaster assistance program, she said, and is going “all over the place,” including the major cities. Both Brennan and Schroeder were intentionally vague about where their agencies support programs because they said it poses a danger to the workers.

Lindborg told the House committee that relief workers are targeted for attack throughout Syria. She said one medical partner agency alone had 37 medical staffers killed, 21 injured and 13 arrested or who were missing. Lindborg said a health center near Aleppo had been bombed the week before, killing 11 workers and patients.

Just delivering aid can be a long, complex process. Lindborg said a trip between Damascus and Aleppo that used to take three hours by car, now is a three-day slog through the 50 or so checkpoints along the road.

Meanwhile, other organizations are preparing for the possibility that perhaps hundreds of thousands of Syrians will decide that they cannot return home anytime soon and need new permanent homes in other countries.

Jeff Cox, associate director for processing operations for Migration and Refugee Services, said the U.N. refugee resettlement program is gearing up to help find new homes for Syrians. Cox said U.S. refugee agencies have been advised by the State Department to expect 1,000 to 1,500 Syrian refugees in 2014.

In the past decade, vetting of refugees for resettlement in the United States has become much more careful, Cox noted, so the process is slow. But MRS has begun gathering information about where in the U.S. there already are communities of Syrians who would be willing to welcome refugees from their home country.

Saying that it is essential for all nations to step forward to provide help to displaced Syrians, Lindborg cited a recent U.N. report estimating that the war’s damage to Syria’s infrastructure and other things included in its “development indices” has set the country back 35 years. She added that it would take a decade or more to bring the country back to contemporary development standards.

Brennan said the people she met recognize the work to be done to rebuild their country and all she talked to said they are willing to go home, to live in tents or whatever it takes to start over again.

But given conditions in Syria and the dim hopes that the fighting will be over anytime soon, he said, “I think the UNHCR is gearing up for a large refugee resettlement.”

NEXT: Pope: Church must show what unity looks like, avoid divisions, gossip