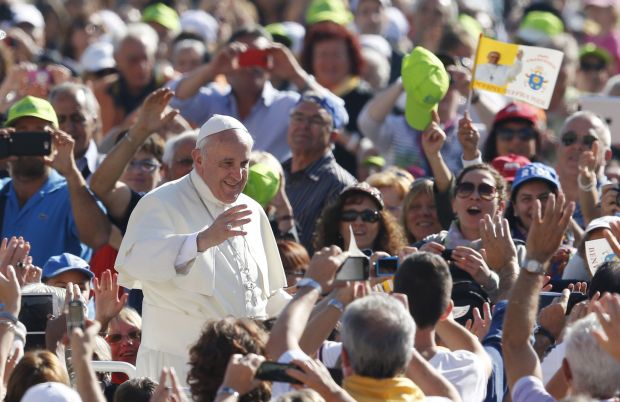 Pope Francis greets the crowd as he arrives to lead his general audience in St. Peter's Square at the Vatican Sept. 25. (CNS photo/Paul Haring)

Unity is a gift from God, “but often we struggle to live it out,” he said. “We are the ones who create lacerations.”

The pope also asked people to pray for persecuted Christians in the world and to be genuinely concerned about their plight, just as one would be for a family member in distress.

At his weekly general audience in St. Peter’s Square Sept. 25, Pope Francis continued his series of audience talks about the creed — looking at what Catholics believe about the church — and focused on the Catholic belief in “one, holy, catholic and apostolic church.”

Catholics of every culture, language and part of the world are united in their common baptism and in sharing the church’s one faith and sacramental life, the pope said.

This unity in faith, hope, the sacraments and ministry “are like columns that support and hold together the one great edifice of the church,” he said. And it also helps Catholics feel like members of one family, “united no matter the distance” between them.

But the pope asked people to reflect upon whether they live out this unity or are they uninterested — preferring to be closed off from others, isolated within their own community, group of friends or nation.

“It’s sad to see a ‘privatized’ church because of egoism and this lack of faith,” he said.

It’s especially sad when there are so many fellow Christians in the world who are suffering or being persecuted because of their faith, he said.

“Am I indifferent or is it like someone in the family is suffering?” he asked.

He asked everyone to be honest with themselves and respond in their hearts: “How many of you pray for Christians who are persecuted” and for those who are in difficulty for professing and defending the faith?

“It’s important to look beyond one’s own fence, to feel oneself as church, one family of God,” he said.

But throughout history and even today, people within the church have not always lived this unity, he said.

“Sometimes misunderstandings, conflicts, tensions and divisions crop up that harm (unity), and so the church doesn’t have the face we would want, it doesn’t demonstrate love and what God wants.”

“And if we look at the divisions that still exist among Christians, Catholics, Orthodox and Protestants, we feel the hard work (needed) to make this unity fully visible.”

The world today needs unity, he said: “We need reconciliation, communion, and the church is the home of communion.”

Building unity starts with oneself and starts at home, the pope said.

“Everyone ask yourselves: Do I build unity in my family, parish and community or am I a gossiper? Am I the reason for division and difficulty?”

The pope said talking badly about others hurts everyone, including the church and communities.

“Christians must bite their tongues before gossiping,” he said. “That will do us good because that way the tongue swells up, and you can’t talk” badly about others, he said to laughter and applause from the crowd.

He asked people to have the humility to repair the divisions in one’s life “with patience and sacrifice” and follow the Prayer of St. Francis to be instruments of God’s peace.

“Humility, gentleness, magnanimity and love for preserving unity are the real pathways of the church,” he said.

Because the Holy Spirit is the real “engine” behind the life and renewal of the church, prayer is important. Unity in diversity comes from the Holy Spirit, which everyone received with baptism and confirmation, he added.

The true richness of the church “is what unites us, not what divides us,” he said.

NEXT: Philippine bishops call for release of hostages as gunfights rage