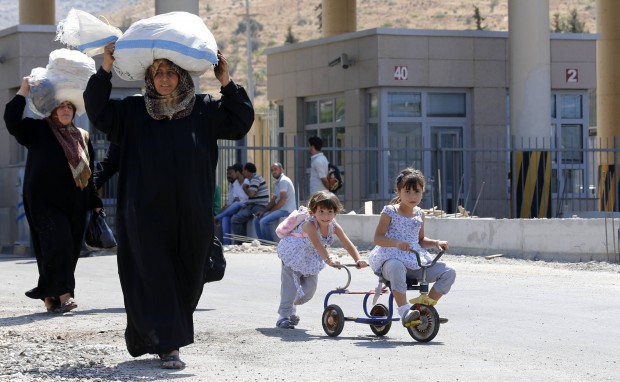 ISTANBUL (CNS) — Tanil Kahiaian, a refugee from the Syrian city of Aleppo, said he is doing what he can for the others fleeing his country. He, his wife and two children escaped the Syrian war almost a year ago, and since he has watched “tens of thousands” pour into neighboring Turkey as he did.

“It is so difficult for me to see this, their poverty. I am donating clothes from my work,” Kahiaian told Catholic News Service Sept. 8 from near his home in Istanbul’s Kumkapi district.

Kahiaian said he considered himself among the fortunate refugees here, because he came with money, was being lodged by Istanbul’s Armenian Orthodox community, and was able to quickly get a job with an Armenian clothing firm in Turkey because of his numerous languages.

“I speak Turkish and I am doing for them a lot of business in Turkish clothes with Arabic countries. But the people on the border have nothing,” he said. “If there are (air) strikes on Syria, their numbers will be more.”

Turkey’s government is providing basic needs and some education to an estimated 200,000 Syrians in 20 different humanitarian camps along its 560-mile border with Syria. But as many as 260,000 other Syrians are living in other areas in Turkey, including Istanbul, where they often depend mostly on help from private aid groups, according to the U.N.

“We are getting more and more (Syrians) by the day,” said a Christian aid group official in Istanbul, who requested anonymity due to Turkish laws that officially forbid — but tolerate — religious institutions from performing humanitarian work in the country.

The official and others involved in refugee aid efforts in Turkey and elsewhere worried that any increase in the violence in Syria, including possible U.S.-led air strikes on the regime of Syrian President Bashar Assad, would send even more people fleeing.

“We can’t even cope with the amount of (Syrian) refugees here already,” said Bishop Louis Pelatre, apostolic vicar of Istanbul, who is familiar with Catholic aid efforts in Turkey.

In Jordan, where the UNHCR says 515,000 Syrians have sought shelter, Omar Abawi of the Catholic charity Caritas said that in the northern region of Mafraq alone, as many as 180 Syrian refugees were registering daily for aid.

He said that did not necessarily mean these were new arrivals but people who are afraid of what might happen in the coming days, who wanted to register for Caritas assistance.

“Many are pregnant or lactating women. In addition to helping with rent money, we are providing milk, diapers, fresh food, and water heaters needed for hot water to bathe the children. We will also provide heavy clothes for the winterization program,” said Abawi, who heads the Catholic charity group’s emergency response unit for Syrian refugees in Jordan.

U.S. President Barack Obama is pushing for military strikes against the government of Syrian President Bashar Assad, as punishment for the alleged use of chemical weapons in the ongoing civil war there.

Several countries, including France and Turkey, have said they would support such strikes.

In the Holy Land, Kairos Palestine, a Christian Palestinian group working for an end to Israeli occupation and toward a peaceful resolution of the Israeli-Palestinian conflict, said in early September that although its members were “horrified and concerned” by the use of chemical weapons in Syria, a military response would “escalate the situation and increase civilian disaster.”

The statement noted that the Iraqi war that overthrew Saddam Hussein resulted in the injuring and displacement of millions of Iraqis, including more than a million Iraqi Christians who were forced to flee their homes.

Recent history has proven that “surgical strike” that Obama is calling for is an “impossible concept” leading to ever spiraling tragedies, said the statement.

“We fear the repercussions that will affect the whole region and even further,” it said.

At a Christian-led center for refugee aid in Istanbul, three Syrian women in head scarves agreed to talk to a reporter, then got nervous when a center interpreter advised it would be better if they did not.

“My mother is sick and it was dangerous in Syria,” said one of the women before heeding the interpreter’s advice.

At another nearby Catholic charity, which asked not to be mentioned, two volunteers were busy stockpiling used jeans and other clothing for the anticipated arrival of new refugees.

“We get these as donations and give them for free,” along with some medical and legal help, said one of the volunteers, on condition of anonymity.

“We think a lot of Syrians will be coming,” if there are air strikes on Syria, she said, adding that, as of now, “we get more or less two families per week, mostly Muslims.”

Contributing to this story were Dale Gavlak in Amman, Jordan, and Judith Sudilovsky in Jerusalem.

PREVIOUS: Thousands flock to Rome armed with power of prayer in fight for peace