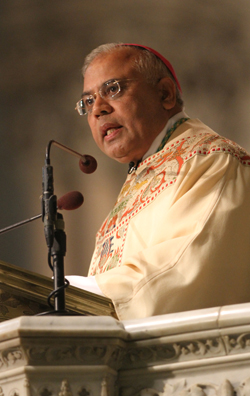 Archbishop Francis A. Chullikatt, Vatican nuncio to the United Nations, delivers his homily during a Mass for peace in Syria at St. Patrick’s Cathedral in New York Sept. 7. (CNS photo/Gregory A. Shemitz)

NEW YORK (CNS) — Military strikes on Syria are unjustified and will create a far larger humanitarian disaster for people already suffering from hunger, displacement and critical lack of medical care, said the Vatican nuncio to the United Nations.

Archbishop Francis A. Chullikatt urged, instead, that world leaders work toward a “cessation of violence, not an escalation of violence” in Syria during a Mass Sept. 7 at St. Patrick’s Cathedral in New York.

The Mass was celebrated in conjunction with Pope Francis’ request for a worldwide day of prayer and fasting for world peace, and particularly for a peaceful resolution to Syria’s civil war.

“A cease-fire, even if only partial, would permit humanitarian assistance to reach at least the hardest hit areas of the country,” Archbishop Chullikatt told those who attended the liturgy. “Helping Syria means finding political and humanitarian solutions through dialogue and reconciliation, not intrusionary military tactics.

“As winds of war howl around Syria in this moment, we urge building and restoring peace through all options and alternatives, not yet exhausted. How can we think of military strikes as the only alternative? The end cannot justify the means,” he said.

“How could we possibly remain indifferent to the humanitarian disaster that strikes would leave in their aftermath? Who could take the responsibility for such a calamity? Who will shelter the refugees and displaced, those orphaned and widowed? No less than a third of Syria’s population is already displaced.”

Archbishop Chullikatt said escalating the violence could double the number of Syrians displaced by violence. He suggested that as much as half of the population of Syria will need assistance by the end of 2013.

He said the Catholic Church is tasked with announcing God’s peace “and this is why we gather at this critical moment in prayer and fasting.”

“The failure to place the human being at the center of our concerns, including in instances of humanitarian intervention dehumanizes us and is profoundly counterproductive. Would that we could invest our resources and efforts in people as willingly as we do in the weapons of war. Only a culture of peace, rooted in the hearts and minds of people and in each one of us, especially our leaders, can truly bring lasting peace. Peace is the only path for the survival of mankind. There is no other,” he said.

The archbishop called upon worshipers to “urge our leaders, like the king in this Sunday’s parable (Luke 14:25-33), to sit down and consider the consequences of resorting yet again to war, repeating past mistakes. Wars to end wars too easily turn out to be stimuli to further wars.”

Archbishop Chullikatt said Pope Francis understands the “horrific complexities of the situation in Syria,” including the suffering, devastation and pain, especially among civilians.

“As pastor of the universal church, Pope Francis admonishes us to be peacemakers, to instill hope, the desire for peace in the hearts of all. With solicitude for the whole world, the Pope exhorts us to stop and to think … before we wound peace any more than it already has been lacerated.”

Archbishop Chullikatt said the pope’s plea serves as a challenge to those at the United Nations and an invitation to the task of peacemaking.

“The time to make a difference is now,” he added. “This is the moment for us to demonstrate ourselves true humanitarians, the opportunity to do something that truly helps the people of Syria find peace has arrived.”

NEXT: Vatican’s new top diplomat ready to ramp up network for peace