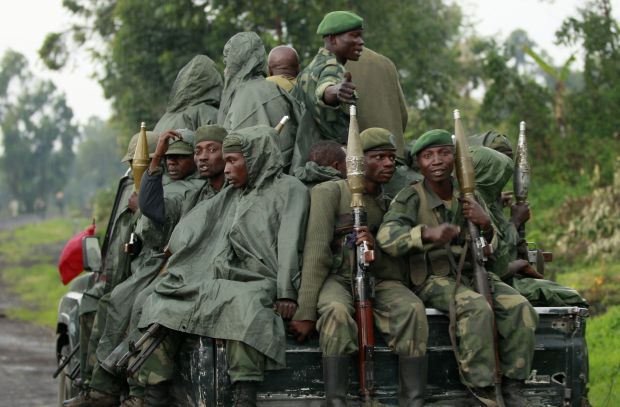 Congolese soldiers ride on their pick-up truck as they advance to a new position while battling M23 rebels in Goma Sept. 2. (CNS photo/Thomas Mukoya, Reuters)

NAIROBI, Kenya (CNS) — A bishop from eastern Congo said people in the area continue to suffer from an ongoing government-rebel conflict, and he hoped pressure from the international community would help relieve the situation.

Bishop Willy Ngumbi Ngengele of Kindu, Congo, told Catholic News Service in Nairobi that people in and around North Kivu and Goma were the worst hit.

“People there suffer from lack of food, shelter and clothes.” he said. He said the church’s aid agency, Caritas Internationalis, was helping victims, “and we thank God for this.”

Bishop Ngumbi spoke to CNS before members of the International Conference on the Great Lakes Region met with U.N. officials in Kampala, Uganda, Sept. 5, to discuss the situation in Congo. In late August, Congolese troops, backed by a special U.N. force, launched a fresh assault against the M23 movement in North Kivu.

After the meeting, rebel representatives agreed to meet with government leaders in Uganda.

In the past, conflict in eastern Congo — known for fertile lands and valuable minerals — has dragged regional powers into the fighting, with both Rwanda and Uganda accused of backing the M23, claims they deny. Angola, Namibia and Zimbabwe have backed the government.

According to the United Nations, in the past year, fighting has displaced more than 100,000 people, bringing the total of internally displaced Congolese to 2.6 million. The U.N. said 6.4 million need food and emergency aid.