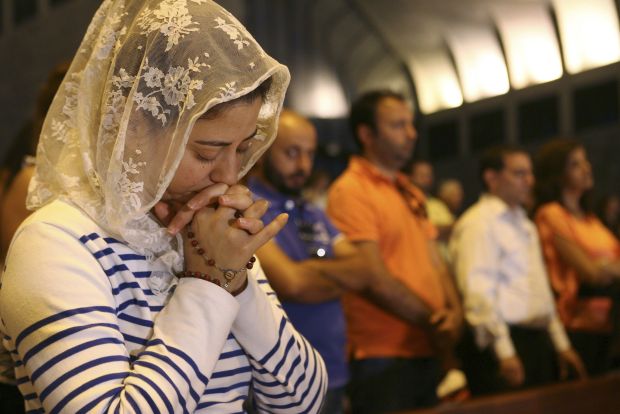 Lebanese and Syrian Christian Maronites pray for peace in Syria at the Basilica of Our Lady of Lebanon in Harissa Sept. 7. (CNS photo/Hasan Shaaban, Reuters)

JERUSALEM (CNS) — At the Church of All Nations at the Garden of Gethsemane, the stone that traditionally has represented Jesus’ agony was scattered with notes in different languages — all asking for peace in Syria.

Christian leaders of the Holy Land gathered there Sept. 7, as Christians and Muslims all over the world prayed with Pope Francis for Syria.

In the West Bank and in Turkey, in Canada and the United States people gathered, responding to the papal call for prayer and fasting.

“We prayed for peace for Syria and for Egypt,” said Yusef Daher, executive secretary of the Jerusalem Inter-Church Center. “We were resisting the other call for war with a call to stop the (possible U.S. air) strike and save Syria and Egypt. Everybody was really praying.”

“There is no fear of retaliation. All the attention is focused on (the Syrian people),” he told Catholic News Service.

Following the prayers, the courtyard of the church was lit by hundreds of candles as the worshippers joined in a small candlelight procession. In front of one of the ancient olive trees, the word “peace” was spelled out with stones.

Halfway around the world, in New Orleans, people were gathered at the National Shrine of Our Lady of Prompt Succor.

“We are far, far away from Rome yet we are connected to our Holy Father and his pleas for peace,” said New Orleans Archbishop Gregory M. Aymond.

“Jesus said things can only be driven out, some evils can be stopped only by prayer and fasting, and that’s what we do today,” he said.

In Ottawa, Ontario, Archbishop Terrence Prendergast led a prayer vigil at St. Patrick’s Basilica that began at 1 p.m. to coincide with the pope’s vigil in St. Peter’s Square. By the 4:30 p.m. Mass, more than 1,000 people packed the basilica; others came and went throughout the day.

In his homily, Archbishop Prendergast said all involved — the Syrian regime, those fighting it and “those in the West who are intent on redressing the horrific and shameful use of poisonous gas on innocent civilians” — should pursue peace rather than “risk disgrace by starting something” they cannot finish or “risking being completely overwhelmed by war.”

Canadian church leaders renewed their call for a second day of fasting and prayer, previously set for Sept. 14.

In Istanbul, Mahmut Kurtoglu, a Muslim preacher, was asked to read parts of the Quran during a two-hour service at Santa Maria Draperis Church.

“The message is if you haven’t got a prayer, you have nothing, so God says ‘Pray, and I will answer you,'” Kurtoglu told CNS afterward.

“This evening we have no weapons other than fasting and prayer,” he said from beside the 18th-century church’s altar.

Nearly 800 miles to the southeast, in Ramallah, West Bank, about 300 Christians and Muslims gathered at Annunciation Melkite Catholic Church. Following prayers, they processed by candlelight to the nearby Islamic Club.

“The idea was for all to pray together,” said Father Raed Abusahlia of Holy Family Catholic Church. “We are all very concerned about the situation in Syria and are against violence and any U.S. attack against Syria. We are not with Assad or the rebels, because no one understands what is going on there.”

Contributing to this story were Christine Bordelon in New Orleans, Deborah Gyapong in Ottawa and James Martone in Istanbul.