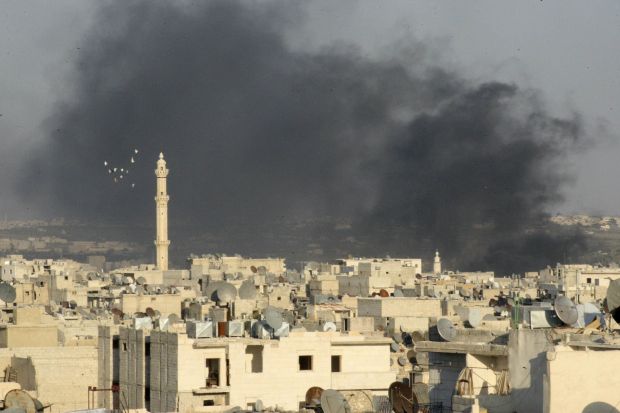 WEST PALM BEACH, Fla. (CNS) — The president of the Franciscan Foundation for the Holy Land said his Christian counterparts in the region worry that U.S. strikes in Syria would further inflame a situation where many nations ply for influence.

“The concern is that if the U.S. does start military operations in Syria, then Iran will try to do something in Israel and set off a bloody chain of events that it could be a powder keg,” Franciscan Father Peter Vasko said.

The American-born priest spoke with The Florida Catholic, Miami’s archdiocesan newspaper, Sept. 5 at the start of a 13-city tour of the U.S. In his presentations, he planned to discuss challenges for Palestinian and other Christians living in the Holy Land and the foundation’s efforts to support humanitarian projects and provide scholarships for Christian students.

Father Vasko echoed the concern of Pope Francis, who called Catholics and others to a day of prayer and fasting Sept. 7 for peace in Syria and areas of the world experiencing armed conflict.

“If somebody has to speak out who better than the pontiff. My worry is that the previous appeals for peace from the pontiffs sometimes fall on deaf ears, but it is our moral obligation to join him in prayer that this (situation regarding Syria) doesn’t spin out of control.”

Twice a year, Father Vasko travels to the U.S. to meet with foundation supporters and to seek support for Christian young people especially to live meaningful and productive lives in their places of birth and not to emigrate. 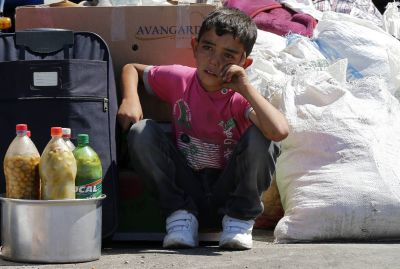 A Syrian boy sits beside his family’s belongings as they wait for a vehicle to pick them up after entering Turkey from the Turkish Cilvegozu border gate Sept. 6. (CNS photo/Umit Bektas, Reuters)

Having spent 27 years in Jerusalem, Father Vasko said he is aware of the struggles that the Holy Land Christians experience. Christians in places such as Egypt, Syria, Iraq and elsewhere have paid a heavy price amidst Muslim sectarian conflicts, political upheaval and incidents of terrorism, he said.

Christian families have frequently sided with either government or opposition forces and therefore made no friends and were sometimes killed, he explained. Because they live in deep fear, Christians keep a low profile and shy away from taking one side over another, he said.

“In many cases, they flee,” Father Vasko said.

“Our monastery in the Suez was blown up (in August) and luckily there were no friars there at the time.”

The message he said he is hearing from leadership of Catholic and Christian communities in the Middle East is to stand firm and not to depart.

“Our friars in Syria are always in danger and don’t know what will happen, but they are fearless,” Father Vasko said. “They are there for the people and other denominations say the same thing: they have to be there in peaceful times and in times of war, to remain and persevere and say ‘we are here to suffer and die with you, if need be.'”

“That takes some courage from religious denominations throughout the Middle East,” he said.

Father Vasco planned to speak with supporters in New York; Columbus, Ohio; San Antonio; Washington and several locations in Florida during his visit.

The priest said he has found that more and more of the Catholic population is becoming familiar with the work of stemming the Christian exodus in the Holy Land, although he conceded that he does not expect the trend to reverse itself any time soon.

A popular priest guide for visitors to the Holy Land, Father Vasko keeps a keen sense of humor about the challenges he faces and said he plans to help identify and train a successor in the coming years as he looks toward retirement.

He added that U.S. pilgrimages to Israel have been strong this year but that the prospect of a U.S. strike in Syria may give travelers concerns about the safety and security in the region.

Father Vasko expressed hope that the prayers for peace sought by Pope Francis from Christians around the world will result in a peaceful outcome to Syria’s civil war.

“It is important for all of us to get together in prayer on this and it is needed, is refreshing and uplifting,” he said. “The pope is saying, ‘Let’s do something,’ really actively engaging our people and for me that is who this pontiff is, and with prayer all things are possible.

“We are a people of hope and divine providence; we have to wait and see what the results are.”

PREVIOUS: For the pope, making peace is now part of the job