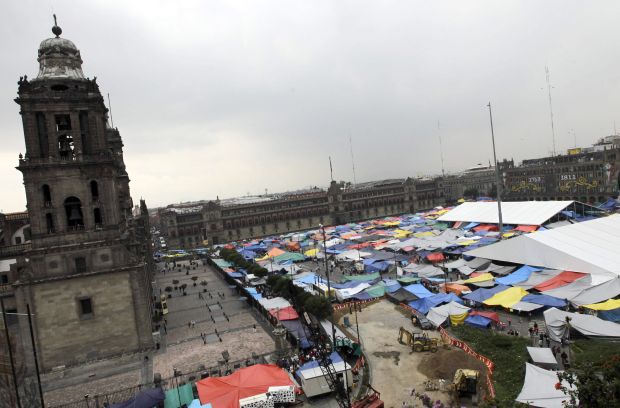 Teachers from southern Mexico camp in Mexico City's Zocalo Square Aug. 26 as they take part in a protest against the educational reform proposed by the federal government. (CNS photo/Henry Romero, Reuters)

MEXICO CITY (CNS) — They come and go, running riot in the Mexican capital, but they always return to a tent city in the central Zocalo Square — right in front of the Metropolitan Cathedral, which Catholic officials say has been negatively affected by the presence of so many protesting teachers.

“It’s not very easy to access for the faithful or visitors,” said Father Hugo Valdemar Romero, spokesman for the Archdiocese of Mexico City.

Father Valdemar acknowledged a sharp drop in attendance, which the newspaper Reforma put at 80 percent for Sunday Masses. The protest camp also forced Cardinal Norberto Rivera Carrera to stay away from the cathedral.

Cardinal Rivera was just one of many Mexicans inconvenienced by the teacher protests, which started in mid-August with the arrival of thousands of unhappy educators from Oaxaca state.

They came to the capital to protest an education reform approved Sept. 3 in a heavily secured Senate session. The protests since collapsed traffic, forced the Congress and the president to move major events and blocked access to the international airport.

The protests have put local church officials in a difficult place. Father Valdemar said the archdiocese preferred not to give an opinion, partly out of concern that the comments could negatively impact the cathedral.

His concerns underscore the sensitivity of the matter as the local and federal governments attempt to defuse protests that threaten governability and the ability of the federal government to approve future reforms in areas such as energy and taxation, both of which promise to bring protesters into the streets. 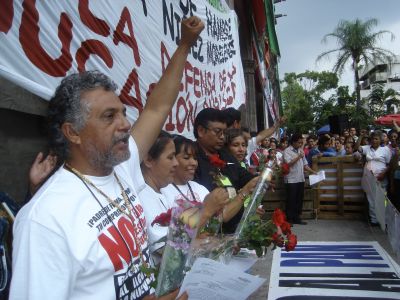 Interior Minister Miguel Angel Osorio Chong warned the teachers that patience has its limits, but neither the federal nor local governments have moved against the educators.

Political observers say past repressions by the authorities against students, such as a 1968 massacre shortly before the Olympics, have made the use of force untenable.

“There’s the right to protest there, but citizens also have the right to move freely,” Cardinal Francisco Robles Ortega of Guadalajara, president of the Mexican bishops’ conference, said Aug. 25. “I believe that it’s best to dialogue and not resort to violence.”

President Enrique Pena Nieto promised to push ahead with his reform agenda — which his party thwarted until regaining power in December — in spite of the protests. The teachers, and two-time presidential candidate Andres Manuel Lopez Obrador, planned a march for Sept. 8 to protest both the education reform and a proposed overhaul of the state-run oil industry that would bring in outside investment.

The new reforms establish an autonomous institute to evaluate teachers. Teachers who fail multiple times can be fired. The reform also eliminates teachers’ ability to sell their jobs and the union controlling the hiring and firing process.

The teachers, who belong to dissident sections of the 1.4 million-member national teachers’ union, describe the reforms as more of an attempt to remove their labor rights and find ways to fire them as opposed to improving education in Mexico, whose students score poorly on international standardized exams.

“The exam is a filter to get rid of teachers,” said teacher Roxana Gutierrez, who said many protesters feared they would be fired.

The dissident sections of the teachers’ union have developed reputations for putting politics ahead of education — charges the protesters reject — and in Oaxaca have struck annually for more than 30 years, Reforma reported.

NEXT: Pope calls for ‘war against evil,’ including illegal arms trade