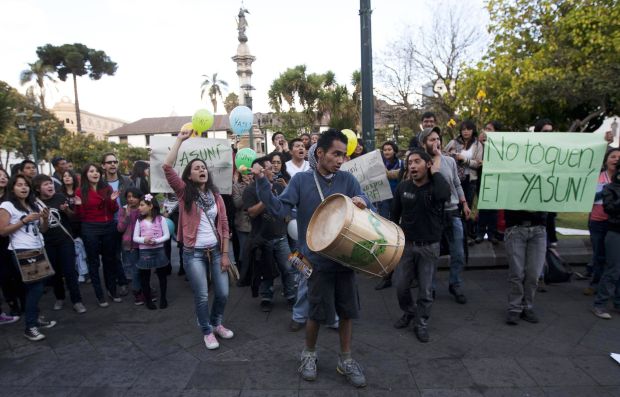 Demonstrators shout slogans during a rally calling for the government to keep the Yasuni initiative in place, outside Carondelet Palace in Quito, Ecuador, Aug. 15. (CNS photo/Josue Leon, Reuters)

LIMA, Peru (CNS) — The gas, oil, minerals and timber that have spurred economic growth in Latin America over the past decade are becoming a matter of life and death in remote communities, church workers say.

“For people who are defending their natural resources and territory in the face of mining, the dangers are great,” Jesuit Father Ismael Moreno, director of Radio Progreso in Honduras, told Catholic News Service Sept. 5. “Last week, there were three murders in some Tolupan Indian communities in the northeastern part of the country, because they organized a protest against a Canadian company’s mining project.”

Those deaths came on top of other killings and threats against community leaders and church workers who accompany them, as mining companies and other industries move into areas traditionally occupied by small farmers, many of whom are indigenous.

Latin America’s economies have grown significantly over the past decade, with much of that growth spurred by so-called “extractive industries,” such as mining, timber, and oil and gas production. In most cases, the countries export the raw materials, losing out on potential revenue from processing and manufacturing.

That makes them vulnerable to “boom-and-bust” cycles, when drops in commodity prices leave countries with less revenue.

But while governments insist that attracting foreign extractive industries is crucial to generate the revenue they need for social programs, roads, communication systems and other infrastructure, people living near the projects — who are often poor, indigenous farmers — fear that they will be left with environmental problems, such as polluted water, long after the companies close up shop and move on.

Protests over mines have resulted in violent crackdowns by police in countries such as Peru and Ecuador, as well as Honduras and Guatemala.

Last year In Peru, workers from a church human rights office investigating protest-related violence were detained at a national police station located inside a mining company’s property. Until then, even local government officials in the Sicuani area said they were not aware that the national police had an office on the mine site.

Mining-related violence is one reason why the Jesuits in the United States are sending a delegation to Honduras in September to look into the problems, said Shaina Aber, policy director for the Jesuit Conference’s Social and International Ministries Office in Washington.

Aber said her office is alarmed “because of the level of violence. There comes a point where you can hire someone for the equivalent of $15 to kill someone.” Another concern, she said, is “the use of police and mercenaries and hit men to (enforce) the interests of powerful parties.”

Later in September, Jesuits from throughout Central America plan to gather with church workers, community leaders, academics and representatives of nongovernmental groups to look at how extractive industries are affecting communities throughout that region. That will be followed early next year by a Latin America-wide meeting in Brazil, Father Moreno said.

Church workers in the various countries are addressing problems such as deforestation, contamination from oil drilling, pollution and violence related to wildcat gold mining and displacement of people because of dam construction, said Archbishop Pedro Barreto Jimeno of Huancayo, Peru, who heads the justice and solidarity department of the Latin American bishops’ council, CELAM.

Ecuador has a network of church workers in its Amazonian regions, and Brazil has an Amazonian ministry, which includes a mobile team, Archbishop Barreto said. But ministry in the Amazonian region — which is complicated by distances, the difficulty of traveling in a region with few roads and multiple cultures and languages, and sometimes the threat of violence — often consists of isolated efforts.

With the network, “We hope there will be more synergy and we will have a greater impact on our governments and on the societies of our countries,” Archbishop Barreto told CNS.

The Amazonian environmental network will focus on both “human and physical ecology,” he said, noting that problems such as deforestation and pollution particularly affect indigenous people who live in the forest.

Some observers are particularly concerned about impacts on nomadic tribes that shun contact with the outside world.

In Ecuador, President Rafael Correa decided in August to allow drilling in a controversial oil lease overlapping Yasuni National Park. The area is also inhabited by Tagaeri and Taromenane people, who generally avoid contact with outsiders, and Huaorani people, who lived in isolation until several decades ago.

In March, a conflict between the nomadic and settled groups ended with the deaths of two Huaorani people and a retaliatory attack in which a group of Huaorani captured two young girls from the nomadic tribe. Some observers worry that the disturbances caused by oil drilling in the area could increase the likelihood of such confrontations.

Some observers also fear conflicts in southeastern Peru, where the consortium of companies that operates the Camisea natural gas lease is expanding into a reserve for nomadic groups. In the past two years, some of those people have approached settlers or park guards, asking for food or clothing.

Some government officials have denied that nomadic people exist or have taken their gestures as a sign that they, too, want to settle into communities, although other observers say they are being squeezed into smaller and smaller areas by illegal loggers, deforestation for agriculture and oil and gas operations.

“There may not be many of them, but they do exist,” said Adda Chueca, director of Lima’s Amazon Center for Anthropology and Practical Application, which assists the country’s bishops on Amazonian and indigenous issues. “These are people who move around, and they need protection. Going in with machinery for exploration puts them at serious risk. Mere contact could kill them” because they lack resistance to diseases that are common in the rest of the population.

The plan for an Amazonian church network is also supported by the Canadian and U.S. bishops, Archbishop Barreto said.

Father Moreno of Honduras urged Catholics in the United States to learn about the ways in which extractive industries affect communities, especially in remote regions of Latin America.

“It would be good for the U.S. church to be connected with the church in countries where it is working with affected communities,” he said. “It is important for people in the United States, and especially in the church, to get information about what is happening and communicate the concerns to Congress and the U.S. government. That’s how mindsets change.”

NEXT: Pope: Sanctity of marriage rooted in Christ’s union with church