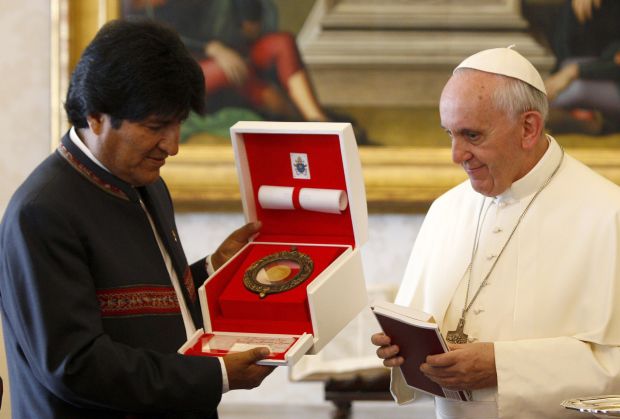 VATICAN CITY (CNS) — The problems of poverty, discrimination and conflict in the Middle East took center stage in private talks between Pope Francis and Bolivian President Evo Morales at the Vatican.

During the 32-minute meeting in the pope’s library Sept. 6, the two leaders held “cordial talks” concerning Bolivia’s “social-economic and religious situation” as well as “the promotion of peace in Syria and the Middle East,” said a written statement released by the Vatican.

The Vatican said discussions focused on “the fight against social inequality and poverty,” and the important contributions the church makes in the fields of education and health care, as well as in supporting families, children and the elderly.

It said the two leaders also stressed “the importance of good relations between the church community and the state.”

The church in Bolivia has had a rocky relationship with the government since Morales took office in 2006.

The bishops and Morales have clashed over multiple issues, including freedom of religion, federal drug policy and autonomy for Bolivia’s eastern provinces. Morales has sparred verbally with local church leaders, accusing them of opposing his government, and has blamed some members of the Latin American church hierarchy of being “the best tool of the (U.S.) empire to keep people from becoming free.”

Upon meeting the one woman in the six-person presidential delegation, the pope joked that she must have been part of the female hiring quota.

During an exchange of gifts, the pope gave the president a copy of the final document from 2007 meeting of Latin American bishops in Aparecida, Brazil, and showed him some of its contents. Morales gave the pope a volume concerning landlocked Bolivia’s quest for legal access to the ocean.

In their parting greetings, the two men embraced warmly, and the pope told Morales, “say ‘hello’ to friends and Dilma” Rousseff, the president of Brazil, which hosted World Youth Day 2013.

NEXT: Latin America’s growth industries can be matter of life and death