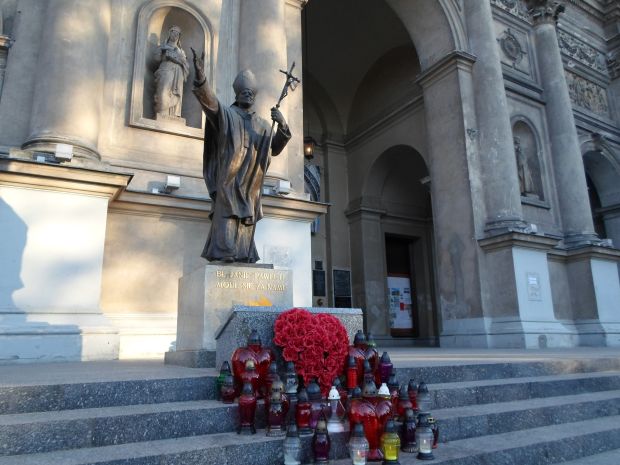 A statue of Blessed John Paul II is seen outside All Saints Church in Warsaw, Poland, in late July. Poles welcome their native son's sainthood, saying he is a "national hero" who set an example for the faithful. (CNS photo/James Martone)

WARSAW, Poland (CNS) — A larger-than-life model of Blessed John Paul II as a younger man reaches out from the top of the exterior steps that ascend to All Saints Church, Warsaw’s largest church.

At the statue’s feet one recent summer afternoon sat a bouquet of plastic red roses, and candles lit in red heart-shaped vases.

Two-year-old Stanislaw played with the roses, and then banged on the statue’s large metal feet, as his father, Lukasz Dzieciotowski, stared at the familiar smiling face and outstretched hand.

“If he becomes a saint, it is nice to know that there is a person that I actually knew and have seen,” Dzieciotowski, an unemployed archaeologist, contemplated out loud.

“I’ve got a father and mother and have known other people, but I didn’t ever know a saint,” he said.

News that Blessed John Paul soon will be a saint evoked varied reactions in the capital of his native Poland.

For Dzieciotowski, 35, who was raised Catholic and has always gone to Sunday Mass, the reaction was one of almost sudden realization that someone he had actually encountered, albeit from a distance and as a child, was now set to be exalted to the highest echelons of the church.

“With my parents when I was young we went to see him crossing the street,” when the former pontiff returned on one of several occasions to Poland, Dzieciotowski recalled.

“It is not that I have read every word of John Paul (but) as I started my life as a person, as a Catholic, he was the only pope I knew,” he said.

Pope Francis signed a decree clearing the way for the canonization of Blessed John Paul II July 5. The decree followed a vote two days earlier to recognize as a miracle the healing of Floribeth Mora Diaz, a Costa Rican who was suffering from a brain aneurysm and recovered through Blessed John Paul’s intercession.

For Magdalena Boniukiewicz, a 40-year-old freelance translator and mother of two, Blessed John Paul’s canonization had been just a matter of time.

“We knew he would be canonized, so it is not like we counted the moments. If he wasn’t … that would be the scandal,” she said while on break from a stint interpreting for a visiting World Bank consultant.

“We were very proud to have someone so high up from Poland,” explained Boniukiewicz, who said both her parents had been confirmed by Blessed John Paul in the southern Polish city of Krakow, where she was from. The former pope, then named Karol Josef Wojtyla, was ordained to the priesthood in 1946 in Krakow. He ministered there as priest, bishop and cardinal until becoming pope in 1978.

She said the former pope’s long devotion to Krakow and to Poland made Blessed John Paul a “national hero.” She credited him for spurring the country’s Solidarity movement in 1980, which she said brought “freedom” and the eventual demise of the Soviet Union.

Blessed John Paul “was like Churchill to the British, like Roosevelt to the Americans, and Ataturk to the Turks,” she said, adding that, though only a small girl at the time, she remembered “on his first visit to Poland (as pope in June 1979), everyone went crazy, surrounding him.”

“‘May the Holy Spirit descend and change the face of the earth,'” she remembered Blessed John Paul saying. “He was very smart. He never gave in, he never attacked” and he taught Poles to “stay your ground, but be calm,” Boniukiewicz said.

Boniukiewicz said she had heard stories of people in Poland being cured through prayers to Blessed John Paul, so she would have been surprised if the Vatican had not approved at least one miracle.

Kamil Kosowski, a 24-year-old cab driver, said it didn’t matter if the former pope had performed miracles or not.

“He was a good man. He was a loving human being … and you could see that,” Kosowski said from behind the steering wheel of his taxi caught in downtown Warsaw’s rush hour traffic.

Blessed John Paul “certainly deserves” to be a saint because “he became pope as a young man” and he was “a sweet person,” he said.

NEXT: Pope says church should face wayward members like a merciful mother