Pope assures Rome priests that ‘sanctity is stronger than scandals’ 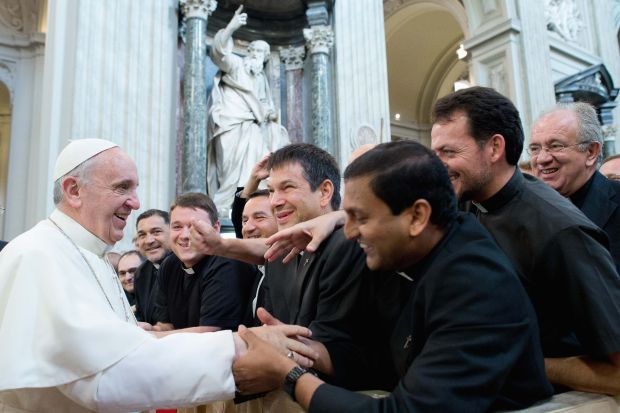 Pope Francis is greeted by priests of the Diocese of Rome during his visit to the Basilica of St. John Lateran in Rome Sept. 16. (CNS photo/L'Osservatore Romano via Reuters)

ROME (CNS) — Acting in his capacity as bishop of Rome, Pope Francis offered words of encouragement to his diocesan priests, assuring them that recent and current scandals cannot overcome the church’s holiness and urging them to keep their vocations alive through love of God.

The pope made his remarks Sept. 16 at a meeting with diocesan clergy in the Basilica of St. John Lateran, the cathedral of Rome.

Pope Francis devoted the first part of the meeting, which lasted more than two hours, to answering a letter he had received a few days earlier from an elderly parish priest, writing of his struggles as a pastor.

“The letter is beautiful, I was moved,” the pope said, speaking without a text. “The letter is simple. The priest is mature and he shared with me one of his feelings: fatigue.”

While voicing sympathy, the pope said that such an experience is an inevitable part of priestly life.

The pope then took questions from five of the priests in the audience, who asked him about specific pastoral challenges.

As he has done on other occasions, Pope Francis urged priests to make their churches more welcoming, suggesting, among other ideas, that marriage courses for engaged couples be scheduled at more convenient times.

The pope offered success stories from his native Argentina, including one about a counterintuitive technique of fundraising that appealed to natural generosity.

“One priest — not from my diocese, from another — once told me: ‘But I don’t make them pay anything, not even for Mass intentions. I have a box there, and they leave what they want. But, Father, I get almost twice what I got before!'”

According to the Vatican newspaper L’Osservatore Romano, the pope urged the priests to keep alive the memory of the beginning of their vocations, born in the love of Jesus, as an antidote to what he called “spiritual worldliness.”

In an 11-page document that he assigned the priests to read before the meeting, Pope Francis defined spiritual worldliness as an “anthropocentric attitude” which aims at human spiritual perfection “instead of the glory of God.” This temptation, then-Cardinal Jorge Mario Bergoglio wrote in 2008, is “infinitely more devastating” to the church than “simply moral worldliness,” such as that exemplified by libertine popes in the past.

The pope reassured the priests that the church continued to produce saints, some of them widely recognized, such as Blessed Teresa of Kolkata, and many others unheralded. He pointed to the example of an Argentine woman who had recently written him a letter on a paper napkin, recounting her efforts to support a drug-addicted son with her job as a cleaner in the Buenos Aires airport.

“I dare to say that the church has never been so well as it is today,” he said, in spite of scandals such as that over clergy sex abuse. “The church will not collapse, I am sure, I am sure.

“Sanctity is stronger than scandals,” he said.

PREVIOUS: Bishops urge all Cubans to live in hope for a better future