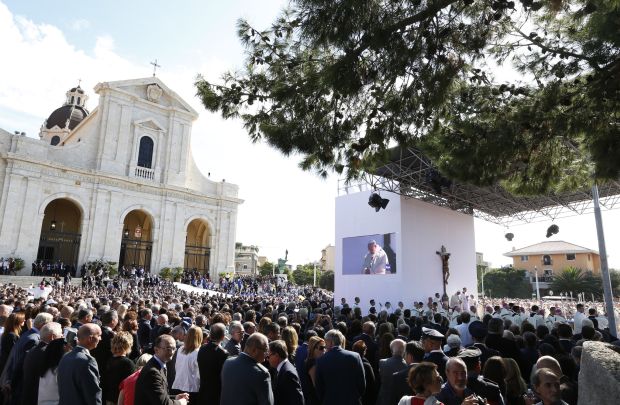 Pope Francis celebrates Mass at the Sanctuary of Our Lady of Bonaria in Cagliari, Sardinia, Sept. 22. (CNS photo/Paul Haring)

VATICAN CITY (CNS) — Visiting an Italian region especially hard hit by the European economic crisis, Pope Francis blamed high unemployment on globalization driven by greed and said those who give charitable aid to the poor must treat their beneficiaries with dignity.

“We want a just system, a system that lets all of us get ahead,” the pope said Sept. 22, in his first address during a full day on the Italian island of Sardinia. “We don’t want this globalized economic system that does us so much harm. At its center there should be man and woman, as God wants, and not money.”

(See a photo gallery of Pope Francis in Sardinia.)

Sardinia has an overall unemployment rate of nearly 20 percent, rising to nearly 50 percent among young adults.

Before speaking to a crowd of about 20,000 near the Cagliari city port, Pope Francis heard a series of speeches in greeting, including one from an unemployed father of three, who spoke of how joblessness “wears you out to the depths of your soul.”

In response, the pope discarded his prepared remarks and told his audience what he said “comes to me in my heart seeing you in this moment.”

Pope Francis recalled the struggles of his immigrant Italian father in 1930s Argentina.

“They lost everything. There was no work,” he said. “I was not born yet, but I heard them speak about this suffering at home. I know this well. But I must tell you: courage.”

The pope said he knew that his preaching alone would mean little to those in difficulty.

“I must do everything I can so that this word ‘courage’ is not a pretty fleeting word, not only the smile of (a) cordial church employee,” he said. “I want this courage to come out from inside and push me to do all I can as a pastor, as a man. We must all face this historic challenge with solidarity and intelligence.”

In his undelivered remarks, which the pope said should be considered “as if they had been spoken,” he thanked those entrepreneurs who, “in spite of everything, have not ceased to commit themselves, to invest and take risks to guarantee employment.”

The pope emphasized the need for “dignified work,” lamenting that that crisis had led to an increase in “inhumane work, slave labor, work without fitting security or without respect for creation.”

Pope Francis said that a commitment to the natural environment could actually stimulate job creation in fields such as energy, environmental protection and forestry.

The pope celebrated Sunday Mass in a square outside the Sanctuary of Our Lady of Bonaria, the namesake of his native city of Buenos Aires. Pope Francis originally announced his trip to Sardinia to venerate the statue of Mary there.

Calling for solidarity with the neediest in society, the pope concluded his homily by urging his listeners to “see our brothers and sisters with the gaze of the Madonna, she who invites us to be true brothers.”

He prayed to Mary to “give us your gaze, may no one hide it from us. May our childlike heart defend it from so many windbags who promise illusions, from those who avidly look for an easy life, from promises that cannot be fulfilled.”

At an afternoon gathering with poor people and prisoners who had been taken to the Cagliari cathedral, Pope Francis had strong words for those who practice charity in the wrong spirit.

“Charity is not simply welfare, much less welfare to soothe one’s conscience,” he said. “That’s not love, right? It’s business, a transaction. Love is free.

“Sometimes one finds arrogance, too, in those who serve the poor,” the pope said. “Some make themselves pretty, they fill their mouths with the poor; some exploit the poor in their own interests or those of their group.

“This is a grave sin, because it means using the needy, those in need, who are the flesh of Jesus, for my vanity,” the pope said. “It would be better for these people to stay home.”