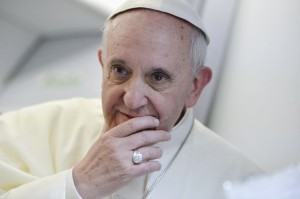 VATICAN CITY (CNS) — In a lengthy and wide-ranging interview with one of his Jesuit confreres, Pope Francis spoke with characteristic frankness about overemphasizing Catholic teaching on sexual and medical ethics; the reasons for his deliberate and consultative governing style; and his highest priority for the church today.

The pope’s remarks appeared in an interview with Jesuit Father Antonio Spadaro, editor of the Italian journal La Civilta Cattolica. The interview, conducted in August, was the basis for a 12,000-word article published Sept. 19 in the U.S. magazine America, and simultaneously in other Jesuit publications in other languages.

According to the editor of America, Jesuit Father Matt Malone, Pope Francis personally reviewed the article and approved its publication.

“We cannot insist only on issues related to abortion, gay marriage and the use of contraceptive methods,” the pope said in the interview, noting that he had been “reprimanded” for failing to speak often about those topics. “It is not necessary to talk about these issues all the time.

“The dogmatic and moral teachings of the church are not all equivalent,” the pope added. “The church’s pastoral ministry cannot be obsessed with the transmission of a disjointed multitude of doctrines to be imposed insistently.

“Proclamation in a missionary style focuses on the essentials, on the necessary things,” he said. “We have to find a new balance; otherwise even the moral edifice of the church is likely to fall like a house of cards, losing the freshness and fragrance of the Gospel.

“The proposal of the Gospel must be more simple, profound, radiant. It is from this proposition that the moral consequences then flow.”

The pope reaffirmed one of his major themes: the need for mercy rather than judgment when approaching sin.

“The church sometimes has locked itself up in small things, in small-minded rules. The most important thing is the first proclamation: Jesus Christ has saved you,” the pope said.

“The thing the church needs most today is the ability to heal wounds and to warm the hearts of the faithful. It needs nearness, proximity,” he said.

“The church sometimes has locked itself up in small things, in small-minded rules. The most important thing is the first proclamation: Jesus Christ has saved you,” the pope said.

“The confessional is not a torture chamber,” he said, “but the place in which the Lord’s mercy motivates us to do better.

“Those who today always look for disciplinarian solutions, those who long for an exaggerated doctrinal ‘security,’ those who stubbornly try to recover a past that no longer exists — they have a static and inward-directed view of things,” Pope Francis said. “In this way, faith becomes an ideology among other ideologies.”

“Many think that changes and reforms can take place in a short time,” the pope said. “I believe that we always need time to lay the foundations for real, effective change. And this is the time of discernment.

“Sometimes discernment instead urges us to do precisely what you had at first thought you would do later. And that is what happened to me in recent months,” he added, though without specifying the action in question.

The pope described the evolution of his governing style, starting with his appointment at age 36 as superior of the Argentine province of the Jesuits.

Later, as archbishop of Buenos Aires, he adopted another approach, meeting often with his auxiliary bishops.

“I believe that consultation is very important,” the pope said, noting his establishment as pope of the so-called Group of Eight advisory panel of cardinals. “I want to see that this is a real, not ceremonial consultation.”

With respect to the Vatican bureaucracy, whose reform he has made a clear priority of his six-month old pontificate, Pope Francis pointed to the need to devolve more authority to local churches.

Some Vatican offices “run the risk of becoming institutions of censorship,” he said. “It is amazing to see the denunciations for lack of orthodoxy that come to Rome. I think the cases should be investigated by the local bishops’ conferences, which can get valuable assistance from Rome. These cases, in fact, are much better dealt with locally. The Roman congregations are mediators; they are not middlemen or managers.”

In matters of belief rather than governance, Pope Francis said that the pope and bishops share authority with the laity.

“The church is the people of God on the journey through history,” he said. “Thinking with the church, therefore, is my way of being a part of this people. And all the faithful, considered as a whole, are infallible in matters of belief.”

The pope quickly added that “we must be very careful not to think that this ‘infallibilitas’ of all the faithful I am talking about in the light of Vatican II is a form of populism. No; it is the experience of ‘holy mother the hierarchical church,’ as St. Ignatius called it, the church as the people of God, pastors and people together.”

Among the other topics the pope addressed in the interview was the challenge of finding a more visible role for women in a church with an all-male priesthood.

“I am wary of a solution that can be reduced to a kind of ‘female machismo,’ because a woman has a different makeup than a man,” he said. “The church cannot be herself without the woman and her role. The woman is essential for the church. Mary, a woman, is more important than the bishops. I say this because we must not confuse the function with the dignity.”

Pope Francis, whose simple way of celebrating Mass has attracted criticism from traditionalist Catholics, also took up the controversial subject of liturgy.

Pope Benedict XVI’s 2007 decision to lift most restrictions on celebrating the Tridentine Mass was “was prudent and motivated by the desire to help people who have this sensitivity,” Pope Francis said. “What is worrying, though, is the risk of the ideologization of the (old Mass), it’s exploitation.”

The pope also said that the liturgical reform that followed in the wake of the 1962-65 Second Vatican Council is “absolutely irreversible.”