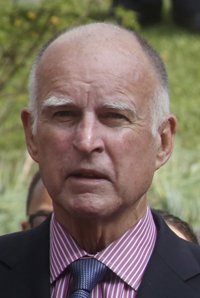 SACRAMENTO, Calif. (CNS) — The president of the California Catholic Conference hailed Gov. Jerry Brown’s veto of a bill that would have reopened the statute of limitations against private employers for child sex abuse cases for a one-year period — but also would have banned lawsuits against public schools and other government agencies, as well as against those found guilty of perpetrating the abuse.

“It was unfair to the vast majority of victims and unfair to all private and nonprofit organizations,” said an Oct. 11 statement by Auxiliary Bishop Gerald E. Wilkerson of Los Angeles.

California lawmakers in 2002 — when the U.S. clergy sex abuse scandal reached its peak –passed a similar law removing the statute of limitations for one year and added as a new subcategory of defendant employers who either knew, or should have known, of the abuse yet failed to take action. But in 2007, the California Supreme Court ruled that public employers were not subject to its provisions.

A 2008 law enacted in California subjected public employers to some, but not all, of the provisions of the 2002 law.

Bishop Wilkerson said the discrimination of victims in S.B. 131 “clearly played a major role” in the veto but he said he hoped that the way Catholic leaders in California have “responded over the last 10 years” to the abuse scandal and have “walked the walk” in the protection of young people and the reporting of allegations to police also “helped play a role” in Brown’s action.

“The church’s reaction has gone way beyond settling more than 1,000 cases and paying $1.2 billion in settlements. It’s changed how we operate as a church,” Auxiliary Bishop Gerald E. Wilkerson of Los Angeles said in a statement.

“The church’s reaction has gone way beyond settling more than 1,000 cases and paying $1.2 billion in settlements. It’s changed how we operate as a church,” Bishop Wilkerson continued.

“Millions of children and tens of thousands of church workers have received ‘Safe Environment’ training to learn how to keep children safe and spot potential abuse. Hundreds of thousands of workers and volunteers have been fingerprinted and background checked to screen them for red flags in their background,” he added.

“We continue to provide counseling to anyone who comes forward and we actively work with law enforcement to report allegations immediately and suspend anybody, clergy or otherwise, suspected of abuse.”

The bill Brown vetoed — known as S.B. 131 — would have allowed some claims of long-past abuse to be brought forward during the one-year window.

In an Oct. 12 message explaining his veto a day earlier to members of the state Senate, Brown lashed out at the disparate treatment of private and public employers in the measure.

“I can’t believe the Legislature decided that victims of abuse by a public entity are somehow less deserving than those who suffered abuse by a private entity,” Brown said.

“The children assaulted by Jerry Sandusky at Penn State or the teachers at Miramonte Elementary School in Los Angeles are no less worthy because of the nature of the institution they attended.”

The bill, Brown said, “does not change the significant inequity that exists between private and public entities.”

He added, “What this bill does do is go back to the only group, i.e. private institutions, that have already been subjected to the unusual ‘one-year revival period’ and makes them, and them alone, subject to suit indefinitely. This extraordinary extension of the statute of limitations, which legislators chose not to apply to public institutions, is simply too open-ended and unfair.”

The reason for a statute of limitations, which Brown said reaches back into Roman Empire times, “is one of fairness,” he noted. “There comes a time when an individual or organization should be secure in the reasonable expectation that past acts are indeed in the past and not subject to further lawsuits.”

PREVIOUS: Daughters of Charity to withdraw from Nashville, eight other dioceses