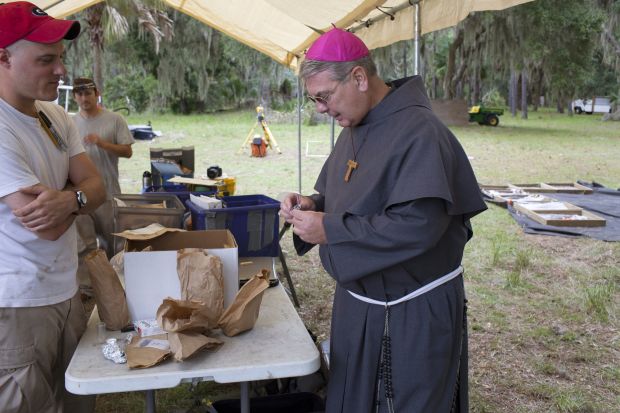 ST. CATHERINES ISLAND, Ga. (CNS) — Savannah Bishop Gregory J. Hartmayer spent Columbus Day visiting the oldest church in the diocese for the first time since he was ordained to head the diocese two years ago.

“This (St. Catherines) is one of the most important Spanish colonial sites in the U.S. It needs to be preserved. Our position is that it goes far beyond St. Catherines. It’s a Georgia thing, and a U.S. thing and I think a Catholic Church thing –something needs to be done,” said Thomas.

In the late 1500s, Franciscan missionaries, followers of St. Francis, like Bishop Hartmayer, who is a Conventual Franciscan, came from Spain by way of Cuba to introduce Christianity to American Indians.

It was only in 1981 that Thomas, curator with the American Museum of Natural History in New York, discovered the mission site after five years of excavations. The first call he made was to then-Savannah Bishop Raymond W. Lessard, saying, “I think I found something that belongs to you.”

The connection between the archaeologist and the bishop led to a reconsecration service conducted by Bishop Lessard in 1984 when the skeletons of two Indians were reburied at the mission site. Eventually the remains of 432 American Indians that had been excavated and studied in laboratories around the U.S. were returned to the site and reinterred.

On Oct. 14, Bishop Hartmayer paid a visit to the island, accompanied by three Missionary Franciscans of the Immaculate Conception — Sisters Julie Franchi, Pauline O’Brien and Georgette Cunniff — and other diocesan staff. He celebrated Mass at the mission site, now a grassy berm outlined by palm trees.

Thomas, currently overseeing another excavation on the island, told the group that after the original discovery excavations continued for 15 years into the 1990s until he decided to walk away from the island and preserve the site for future research. 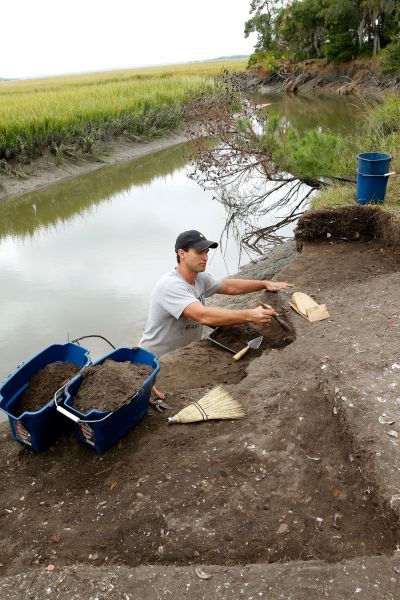 Nature, however, has compelled him and his students to begin digging again in recent years. Erosion at the mission site is proceeding at a rapid rate. The prediction is that the site will disappear in the next century, taking with it valuable clues to history.

At the same time, the St. Catherines Island Foundation, which owns the island, is trying to determine how best to stop the erosion.

For Bishop Hartmayer, the trip had a twofold purpose. He wanted to see the mission site where fellow Franciscans first brought Christianity to the New World. As bishop of Savannah, he is now in charge of advancing the sainthood cause of the Georgia martyrs, five Spanish friars who were murdered by American Indians in 1597. Two of them met their deaths on St. Catherines, two near present-day Darien and a fifth on St. Simons Island.

In March 2007, Conventual Franciscan Father Conrad Harkins, then vice postulator of the martyrs’ cause, took 500 pages of documents supporting the case for their canonization to the Vatican.

“Basically there was an alliance between the church and the Indians that preserved the Indian culture,” he said. Instead of forcing religion on the American Indians, the Franciscans brokered an agreement with them that kept the Indians’ way of life while incorporating the teachings of Christianity.

“There is no way that two barefoot friars could have stood up to 300 armed warriors,” had the Franciscans chosen a confrontational approach, Thomas told the Southern Cross, Savannah’s diocesan newspaper.

The narrative about the killing of the priests, first written in 1619, has maintained that the friars were slain because they protested the fact that an Indian leader wanted to take more than one wife.

Thomas believes there was more to the story and that the five Franciscans were victims of a conflict between warring Indian factions fighting for power.

While the excavations continue to piece together more of the history, the race to try to stem erosion goes on.

“We have to see what our options are, what the Corps of Engineers and conservation groups will allow,” Thomas said.

The relationship between the archaeologist and the Catholic Church, begun in the 1980s, also will continue. Thomas explained that because there are no living descendants of the Guale Indians — they became extinct in the 1760s — the Catholic Church is the cultural descendant of the mission.

During his homily at Mass, Bishop Hartmayer said, “I am sure in the encounter between the friars and the Native Americans they learned from each other.”

He linked the evangelization that the Georgia martyrs pursued with the “new evangelization” that Popes Benedict and Francis have called Catholics to embrace today. “For those who feel emptiness in their lives, they will find they are fulfilled in Christ. They find a deeper meaning beyond the here and now,” he said.

King is communications director for the Diocese of Savannah, Ga.

NEXT: CRS, University of Dayton to work together to combat labor trafficking