Catholic college mourns death of alumna slain at her school 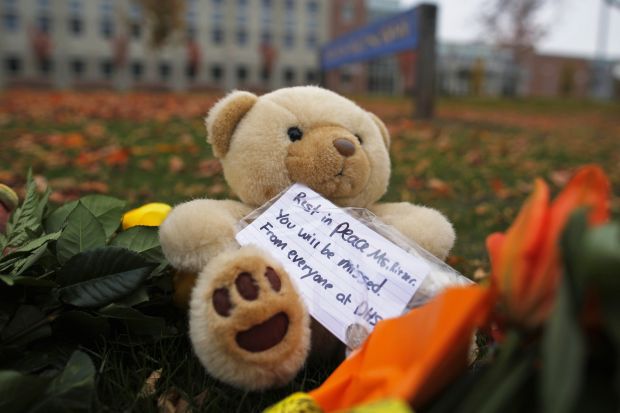 A message is left on a teddy bear outside Danvers High School in Massachusetts Oct. 23 in memory of slain teacher Colleen Ritzer. (CNS photo/Brian Snyder, Reuters)

Assumptionist Father Dennis Gallagher, the college’s vice president for mission, said the time of quiet, prayerful reflection also would be an occasion to pray for her family and the alleged killer, Philip Chism, a 14-year-old student at Danvers High School, about 25 miles north of Boston, where Ritzer taught math.

Ritzer’s body was found in the woods behind the high school. Philip was charged as an adult and arraigned Oct. 23 in nearby Salem on a murder charge and ordered held without bail. Prosecutors said he beat Ritzer to death. Police said Oct. 24 Philip used a box cutter in the slaying.

Authorities said the teen knew the 24-year-old teacher from school, but they provided few details about the killing or a possible motive, according to a Boston Globe report. The newspaper said the cause of death had not been conclusively established.

People quoted by Associated Press or the Boston Globe spoke of Ritzer as well-liked and respected, a mentor to students, passionate about her job, close to family members. Philip was described as a quiet, pleasant top scorer on the school’s junior varsity soccer team, who recently moved to Massachusetts from Tennessee. 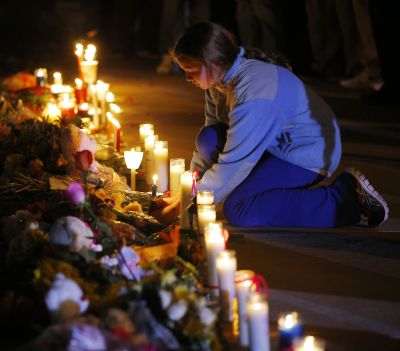 A young woman lights a candle Oct. 23 at a makeshift memorial for Colleen Ritzer outside the high school where she taught in Danvers, Mass. (CNS photo/Brian Snyder, Reuters)

The community of Assumption College, which is in the Worcester Diocese, “will keep Colleen’s family members in its thoughts and prayers during this time of great sorrow and loss,” said Cesareo. “We pray that God will give them strength and comfort during these difficult days and commend Colleen to God’s loving presence.”

Ritzer was reported missing when she didn’t return home from work Oct. 22, and blood found in school bathroom helped lead investigators to her body, AP reported.

Philip, who had not attended his soccer team’s dinner Oct. 22, was found walking along U.S. Route 1 at about 12:30 a.m. the following morning. He was arrested based on statements he made and corroborating evidence at several scenes.

The judge denied the request of Philip’s attorney, Denise Regan, to have the proceedings closed and her client allowed to stay hidden because of his age, according to AP. The teen’s next court appearance was scheduled for Nov. 22.

“The Department of Mathematics and Computer Science deeply regrets the untimely passing of Colleen Ritzer,” Assumption professor Joseph Alfano, a former head of the department told AP. “She was a talented student in math and education, a cheerful presence in and out of class, and a promising young alumna of Assumption College. We will miss her.”

NEXT: First U.S. edition of missal in Spanish may be on the horizon