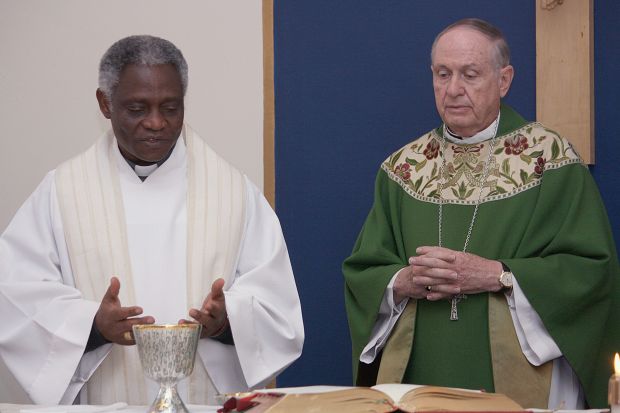 DES MOINES, Iowa (CNS) — He came to engage in conversations about hunger.

Ghanaian Cardinal Peter Turkson, president of the Pontifical Council for Justice and Peace, came to Des Moines for the World Food Prize. He talked with scientists, researchers, policymakers and students. He also made time to talk with those who have concerns about genetically modified food and family farms.

To both groups, he brought the same message: They must engage in conversation and dialogue.

Cardinal Turkson delivered the keynote address at the World Food Prize’s Borlaug Dialogue luncheon Oct. 16, which drew more than 900 people from more than 60 countries to Des Moines. Research must be done with ethics and a clear long-term vision that respects human dignity and strives for the common good, he said.

Recently, there have been vocal concerns about a number of issues related to agriculture research and production to feed the world’s hungry.

Cardinal Turkson visited a group with such concerns, Occupy World Food Prize, and encouraged them to have conversation and dialogue with the people with whom they have differences.

He was warmly received at both presentations, receiving standing ovations from both groups.

“The church promotes listening, dialogue, patience, respect for the other, sincerity and even willingness to review one’s own opinion,” Cardinal Turkson said at the Borlaug Dialogue. “The church encourages, orients and enriches discussion and debate.”

This is particularly important when there are differing opinions, he said.

During his keynote address, Cardinal Turkson said he had never before received so much mail regarding one event as he had for the World Food Prize’s Borlaug Dialogue, which influenced his decision to attend.

Cardinal Turkson expressed support for biotechnology when it is married to ethics, compassion, morality and prudence.

“In Catholic thought, ‘nature’ is neither sacred nor divine, neither to be feared or to be revered and left untouched,” he said. “Rather, it is a gift offered by the Creator to the human community to be entrusted to the intelligence and moral responsibility of men and women. Therefore it is legitimate for humans with the correct attitude to intervene in nature and make modifications.”

Agricultural practices that respect human dignity and the common good would include environmental monitoring, regulations, universal access and transparency to consumers, he said, citing the Second Vatican Council document “Gaudium et Spes,” the Pastoral Constitution on the Church in the Modern World.

“It is hazardous — and ultimately absurd, indeed sinful — to employ biotechnology without the guidance of deeply responsible ethics,” he said.

He also warned of the consequences of denying the most impoverished segments of the population access to the technology.

“Fair ways must be found to share the fruits of research and ensure that developing countries have access to both natural resources and to innovations,” Cardinal Turkson said. “Otherwise, whole populations can be discriminated against, exploited and deprived of what they rightly should have a share in.”

He concluded the Borlaug Dialogue with a call for conversation.

Cardinal Turkson said: “All sides of the controversy are using many of the same key phrases such as ‘overcoming hunger’ and ‘sustainable agriculture,’ thus it will only be by mutual and respectful listening, by a genuine desire to learn from the other, indeed from all the stakeholders, that the better and truly enduring sustainable solutions will be found.”

He participated in an interfaith prayer service to end world hunger during his visit to Des Moines.

The Rev. David Beckmann, president of Christian citizens’ anti-hunger lobby Bread for the World, said at the prayer service that progress has been made to end world hunger and work should continue.

“This is holy work,” he said. Rev. Beckmann is a 2010 laureate of the World Food Prize.

The purpose of the Borlaug Dialogue is to have open discussions about feeding hungry people now and feeding the 9 billion people expected to populate this world by 2050. The soaring growth in population presents challenges — a need to double the world’s current food supply with little increase in farmable land. Increasingly volatile weather patterns further add to the uncertainties.

“We are facing the single greatest challenge in all human history,” said Ambassador Ken Quinn, executive director of the World Food Prize Foundation. “Can we sustainably feed 9 billion people who will be on our planet in the year 2050? We have to do this basically on the land that’s available now for farming, because the other option is that we cut down the forests and rainforests and try to grow food there.”

This year’s laureates are three distinguished scientists — Marc Van Montagu of Belgium and Mary-Dell Chilton and Robert T. Fraley of the United States — recognized for their contributions to agricultural biotechnology. Their research has made it possible for farmers to grow crops with improved yields, resistance to insects and disease, and the ability to tolerate extreme variations in climate.

Collins is a staff writer at The Catholic Mirror, newspaper of the Diocese of Des Moines, Iowa.

NEXT: Catholic college mourns death of alumna slain at her school